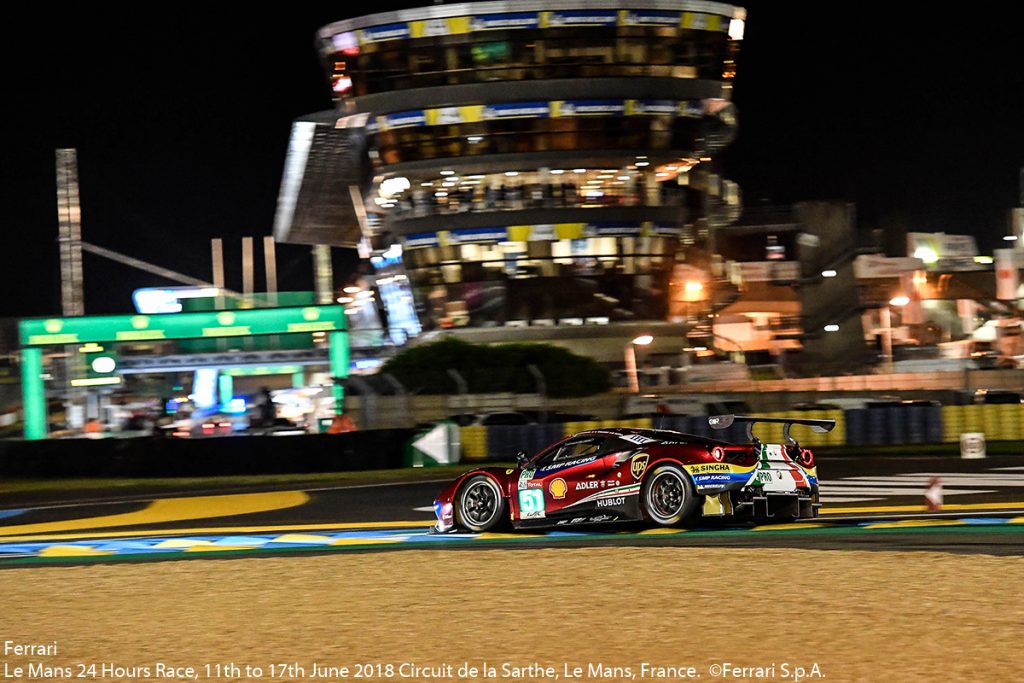 Le Mans, 17 June 2018 – The 86th edition of the 24 Hours of Le Mans won’t be remembered with any fondness by Ferrari crews in the GTE-Pro class. A large dose of bad luck, along with the impossibility of fighting on equal terms with other manufacturers due to an unhelpful Balance of Performance (BOP), kept the 488 GTEs of AF Corse off the podium. It was better in the GTE-Am class with two podium finishes thanks to Spirit of Race and Keating Motorsports-Risi Competizione. 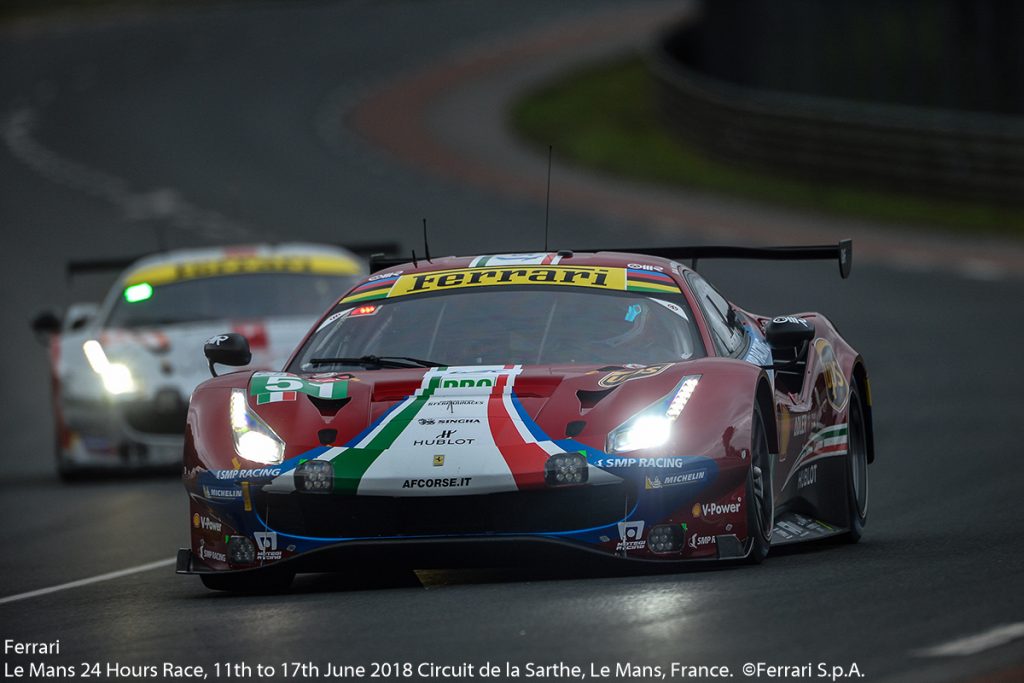 GTE-Pro. The race of the Ferrari crews in GTE-Pro class was immediately affected by incidents. A puncture during the third hour forced James Calado to limp from the Michelin chicane to the pits, losing practically a lap. The first Safety Car phase then split the group into three sections, with Porsche no. 92 out on its own behind Safety Car A, all the rest of the GT cars stuck behind Safety Car B car and no. 51 behind the third Safety Car. This cut world champions Calado and Pier Guidi along with Daniel Serra out of the leading group. During the following neutralisation, car no. 71 found itself with a damaged front splitter due to debris from another car and lost a few laps for repairs. The 488 GTE stayed in the race and crossed the finish line in tenth place, earning championship points. Antonio Giovinazzi, Pipo Derani and Toni Vilander in car no. 52 benefited from the Safety Car, moving up into second. During the night Calado, Pier Guidi and Serra lapped like metronomes rising to sixth position before dropping back to eighth due to a shock absorber problem. However, this finish was worth fifth place in terms of points, as only cars entered in the FIA World Endurance Championship are elegible for. Car no. 52, on the other hand, suffered three stops&go’s for speeding in the slow zone and the pits but finished in sixth. 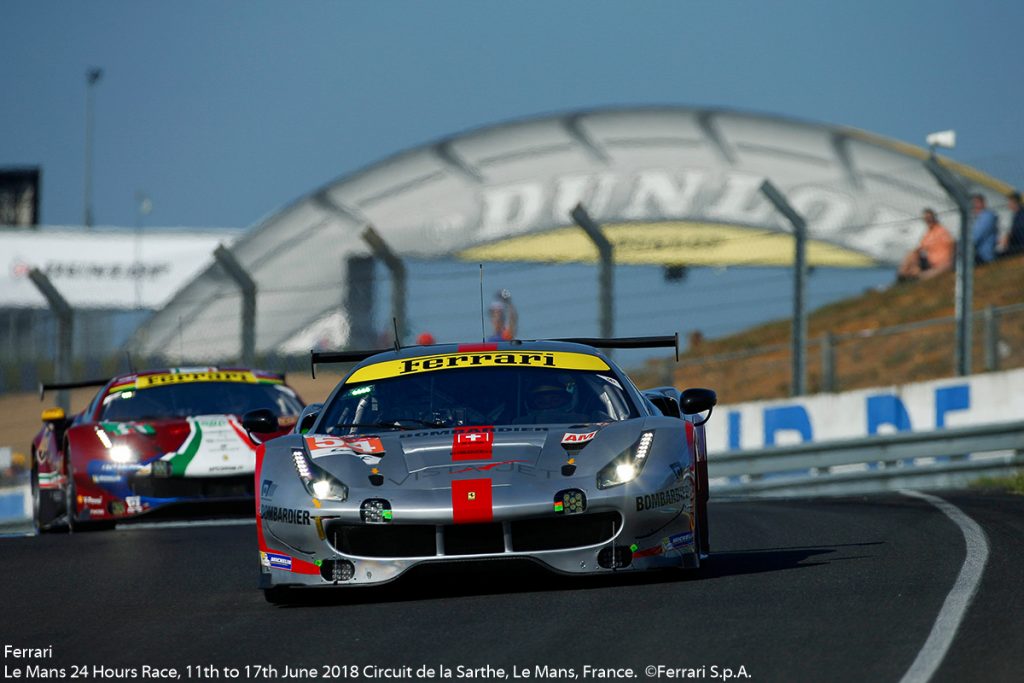 GTE-Am. As usual, Ferrari customer teams played a leading role in the GTE-Am. In this class too, Porsche made the most of the favourable configuration imposed by the regulations, but Spirit of Race, Keating Motorsport-Risi Competizione and JMW Motorsport teams, later delayed by a series of problems, were in the fight. Giancarlo Fisichella started out like a lion and even led for a time before having to content himself with a fight for a podium place when car no. 77 of Campbell-Ried-Andlauer took a decisive lead. After a difficult start the Keating Motorsports crew pulled off a perfect comeback thanks to solid stints from Ben Keating, Jeroen Bleekemolen and Lucas Stolz. In the final stage Keating’s mistake gave Flohr, Castellacci and Fisichella second position but a podium was never in doubt. The Ferrari of JMW Motorsport (MacNeil-Griffin-Segal) finished fifth while the car of Clearwater Racing (Griffin-Mok-Sawa) was eighth, ahead of the 488 GTE of MR Racing (Ishikawa-Beretta-Cheever III). 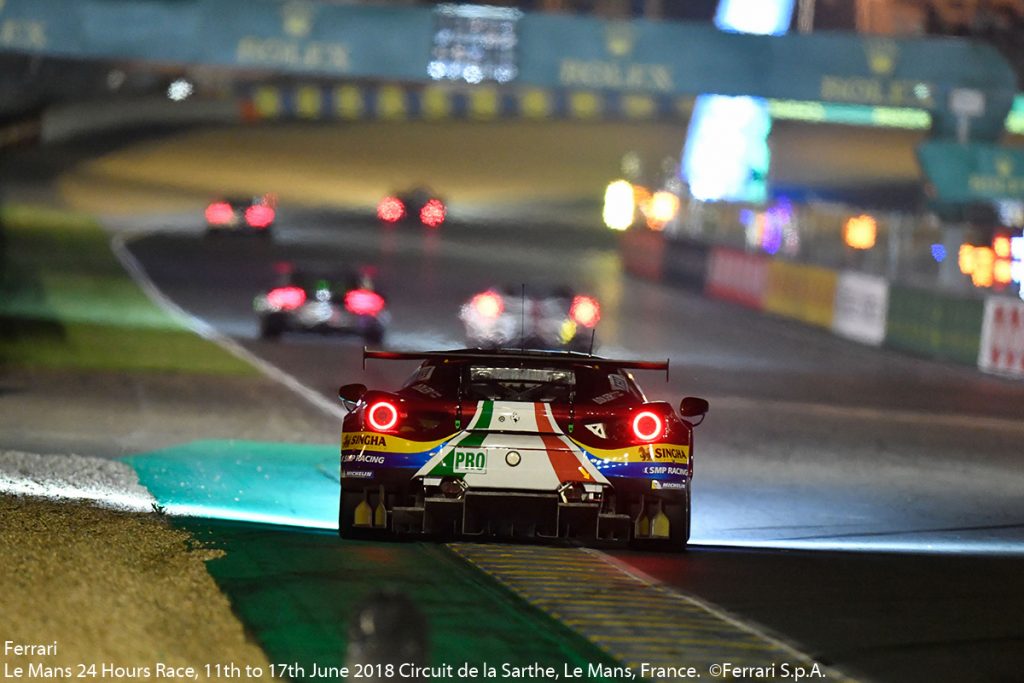