The options have been played. The goal now is to sail as fast as possible to the finish. Nine months of racing will be decided over the next nine hours. 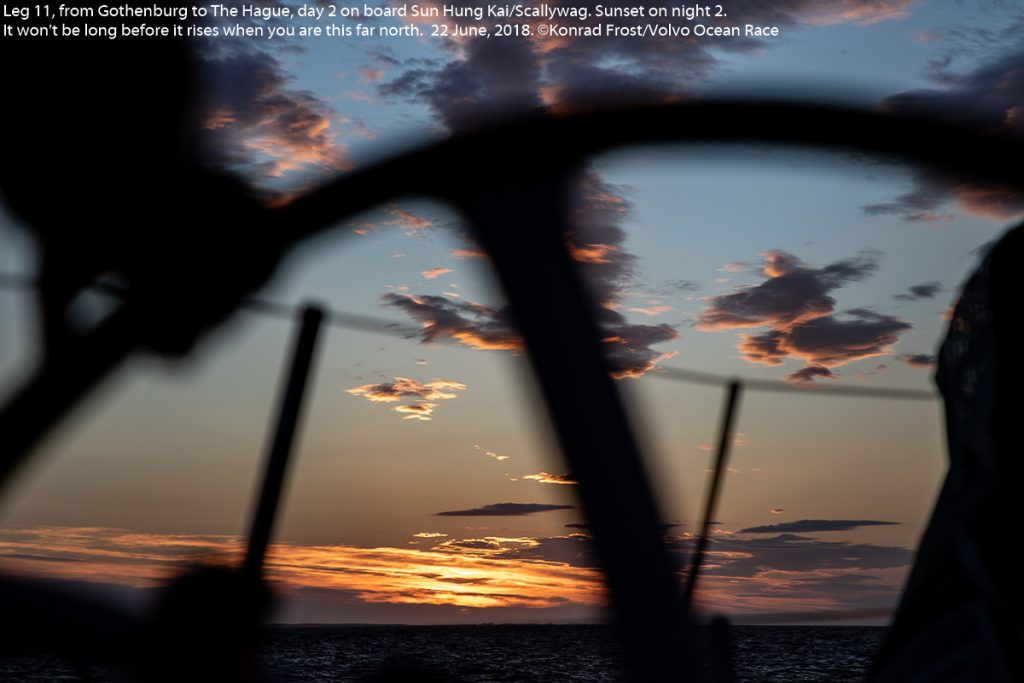 It’s been a sleepless night for Volvo Ocean Race sailors and fans alike. The racing has never been closer and the stakes couldn’t be higher.

On Saturday evening, a split developed among the three boats competing for the overall win in the Volvo Ocean Race 2017-18 – MAPFRE, Team Brunel and Dongfeng Race Team.

The finishing order for these three boats on this final leg of the race will determine their position on the overall race podium.

“We’ve chosen the path inshore,” said watch captain Stu Bannytyne. “So there is a lot of very tricky navigation. There are a lot of sandbanks, Traffic Separation Schemes, maybe some windfarms and very changeable weather.” 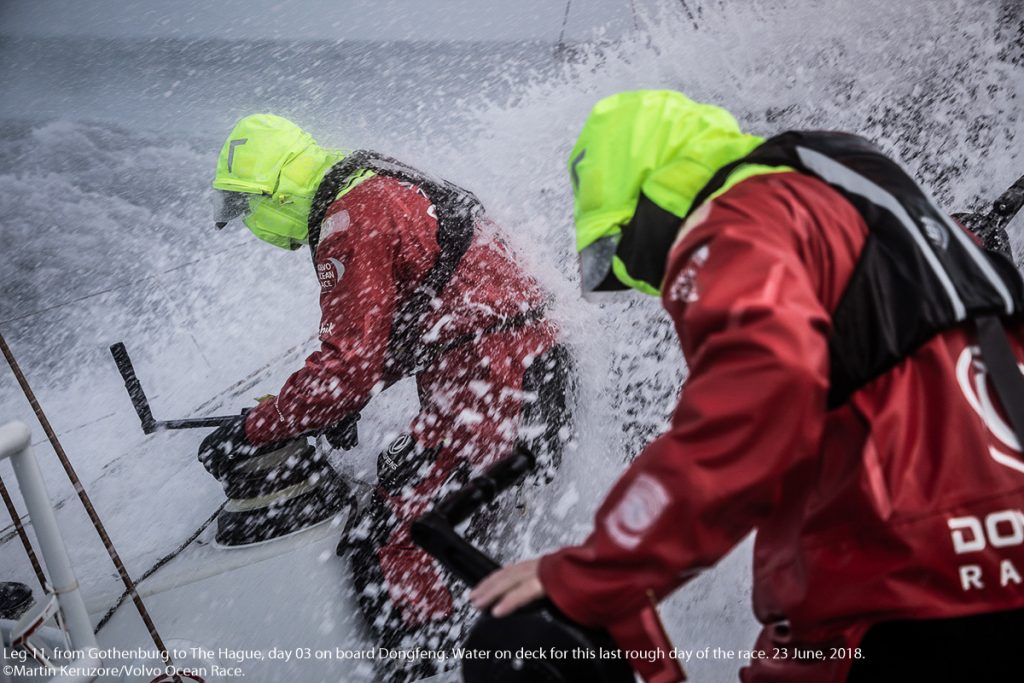 This route has cost the team on the leg leaderboard in the short term. But the possible payoff could come later on Sunday.

With the wind forecast to ease significantly offshore, the dividends of the coastal route may come on the approach to the finish, where the inshore boats hold the breeze and their speed for longer.

Team Brunel, along with the current leg leader, team AkzoNobel, committed to the offshore route early.

“We just need to find some good speed and get to Holland,” said Team Brunel helmsman Peter Burling. His team had to overcome a small breakage on an outrigger last night, which cost them a bit of distance. 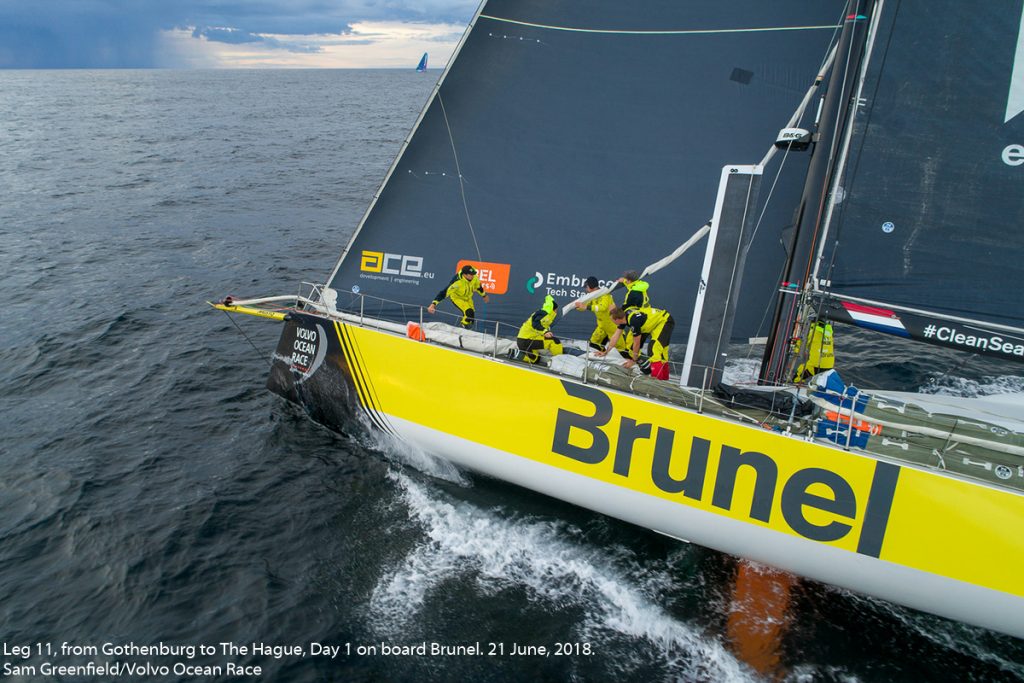 MAPFRE appeared to make a late call to join them and it cost the Spanish crew. Needing to sail a slower angle to get further west, last night’s race leader slid back in the rankings behind the Dutch boats.

“We were lining up to go on the inside, down Germany and the top of Holland, and made a late call to go west – and as a result we lost quite a lot on Brunel and team AkzoNobel who decided to go this way earlier,” said MAPFRE’s Blair Tuke.

“It’s a tricky one but we have to do what we think is right to get us there the fastest. Both boats we have to beat are going different ways. We’re going to have to fight to the end. There’s going to be a compression as we come into the finish, so plenty still to play for. Glad we’re still here and in the fight.” 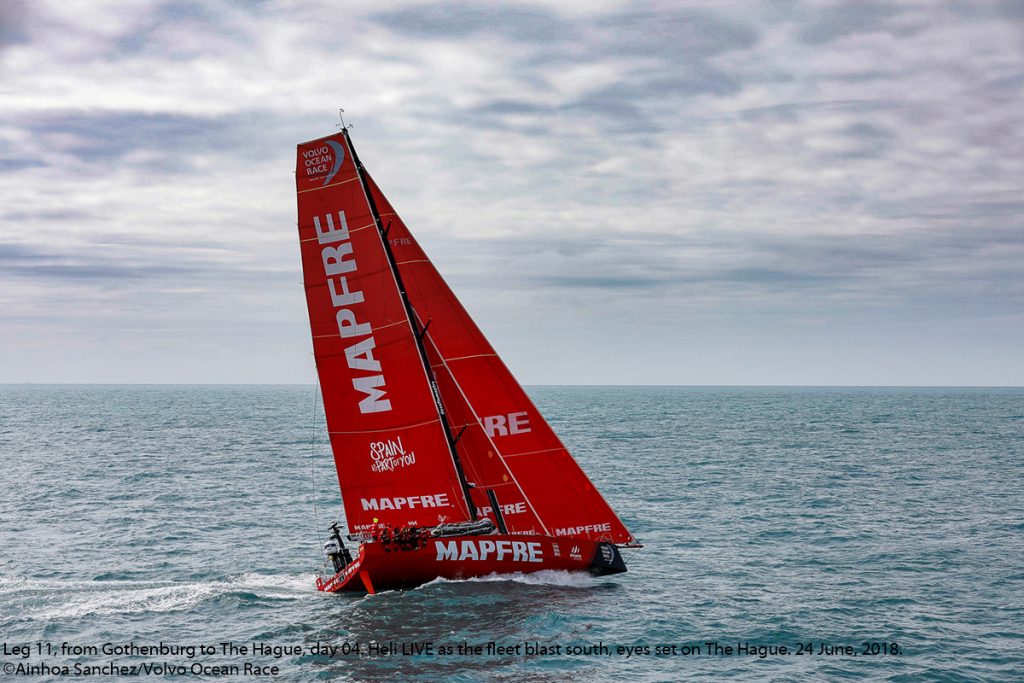 As at 0800 UTC on Sunday morning, the positions are clear, but far from decisive.

Simeon Tienpont’s team AkzoNobel is gunning for the leg win, but just 0.1 miles ahead of Bouwe Bekking’s Team Brunel. And Xabi Fernández’s MAPFRE is just half a mile further back. Vestas 11th Hour Racing is with the offshore group as well, just four miles back. 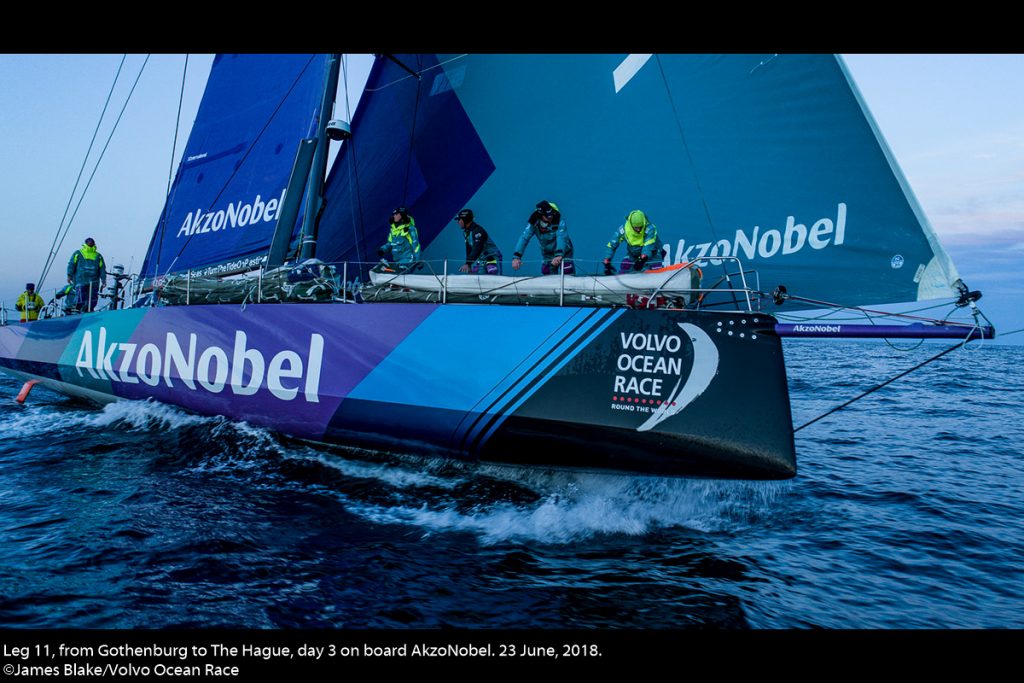 Looking at the Live Tracker, the boats in the east appear to be in trouble, nearly 50 miles back. But in reality, the gap in terms of sailing distance is more like 18 miles. And weather routing software suggests the difference at the finish might be as little as 15 minutes. The fact is, the race is far from over. 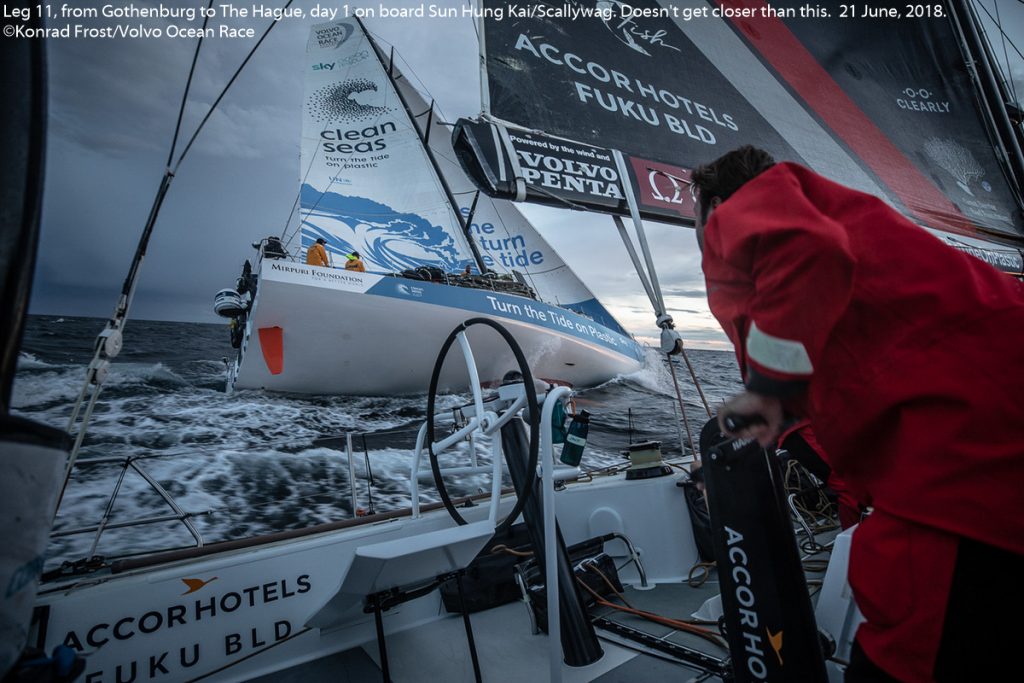 Dee Caffari’s Turn the Tide on Plastic and David Witt’s SHK/Scallywag took the coastal option approximately 10 miles behind Dongfeng. Caffari’s team currently has a two mile margin over the Scallywags, which could draw them level on the leaderboard. If that happens, the In Port Race Series will be the tie-break, with the final race on June 30 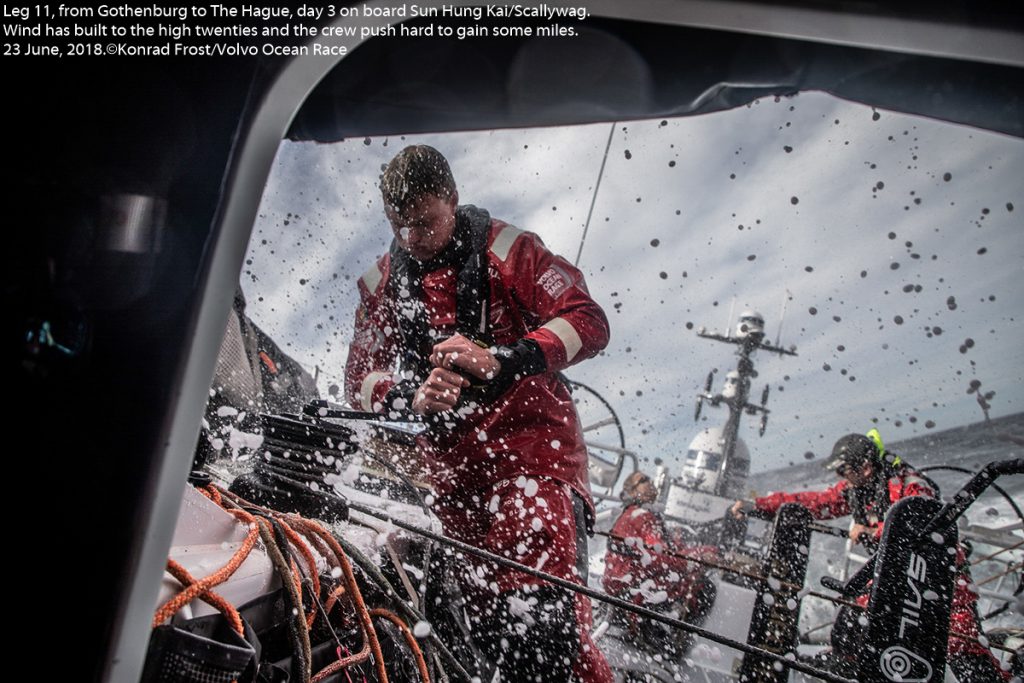 The current ETA predicts the leaders will arrive on Sunday afternoon between 1500 and 1700 UTC – late afternoon local time in The Hague.

Follow every moment of the final leg of the Volvo Ocean Race – Go to www.volvooceanrace.com for live coverage on the Race Tracker as well as the latest content from the race boats. 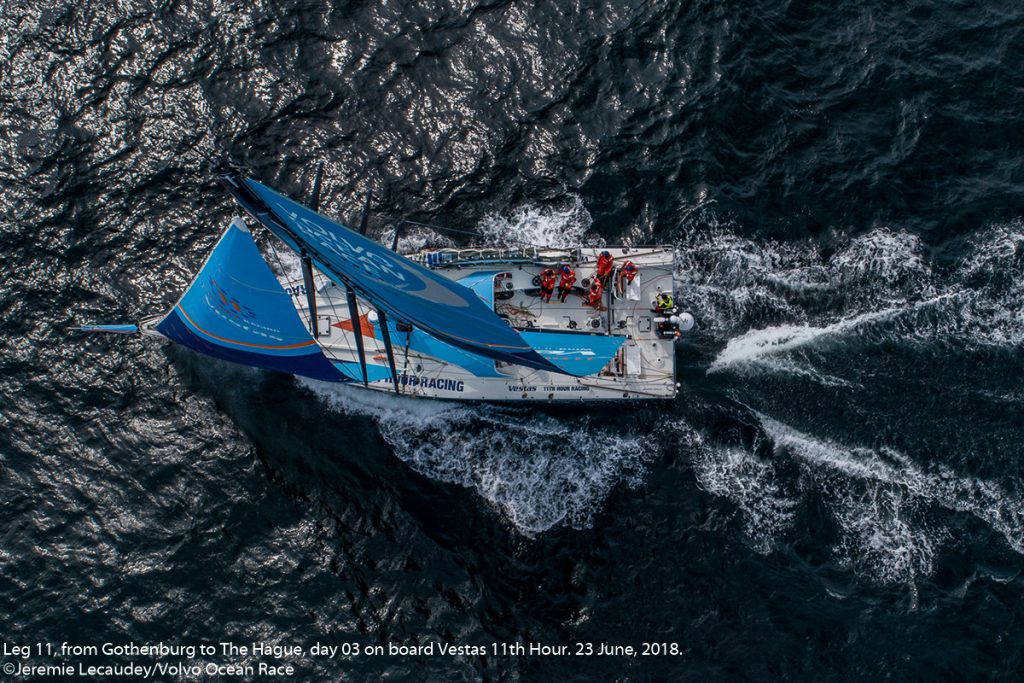 * One additional point will be awarded to the team with the best elapsed time at the conclusion of the race in The Hague. Currently, Dongfeng would win this point.
** Should there be a tie on the overall race leaderboard at the end of the offshore legs, the In-Port Race Series standings will be used to break the tie. 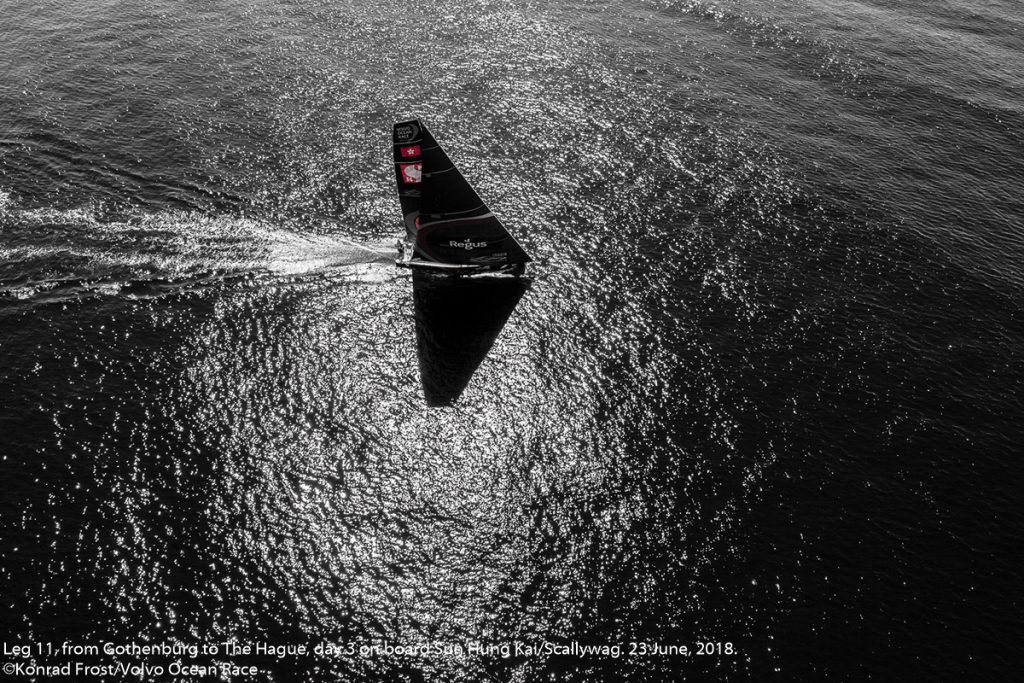