74 entries for the first race Sunday of White Turf 2018 Race Sundays on 04th, 11th and 18th February 2018 White Turf 2018 will start off with a scoop on the first race Sunday. In the GP LONGINES, the main race for gallopers, all the horses, apart from two exceptions, are also eligible to participate in the LONGINES 79th Grand Prix of St. Moritz. In the Skikjöring, the reliable trophy winners Usbekia and Mombasa are already qualified to enter. 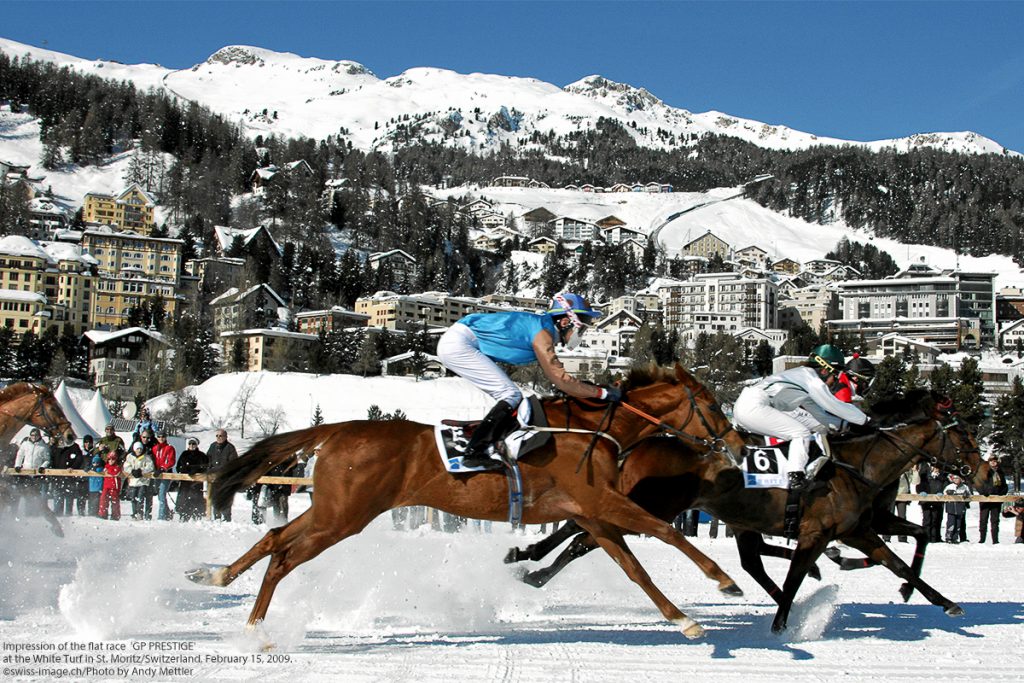 “In all, 74 horses have been entered for the first race Sunday, two more than last year. We are very satisfied with this outcome. Luckily, we have lots of snow in the Engadine, but not in such huge amounts as on the northern side of the Alps. Moreover, the snow is very dry and can easily be compressed on the thick, high – quality ice”,

Gallop races On the first race Sunday, the main race for “English thoroughbreds” will give a foretaste of the final LONGINES 79th Grand Prix of St. Moritz. For the GP LONGINES, 13 gallopers are entered and, so far apart from two, they are all eligible to enter the White Turf finale. It will be a first opportunity to sound out the power relations in the three nations field. Nine entries were registered for the GP Guardaval Immobilien – both Zuoz and Passugger have been entered. Last year’s winner Filou has also received authorisation to start in this sprinting test. The biggest quota of entries so far registered is for the Sigma Camera and Lenses Prize , with a current field of fifteen. 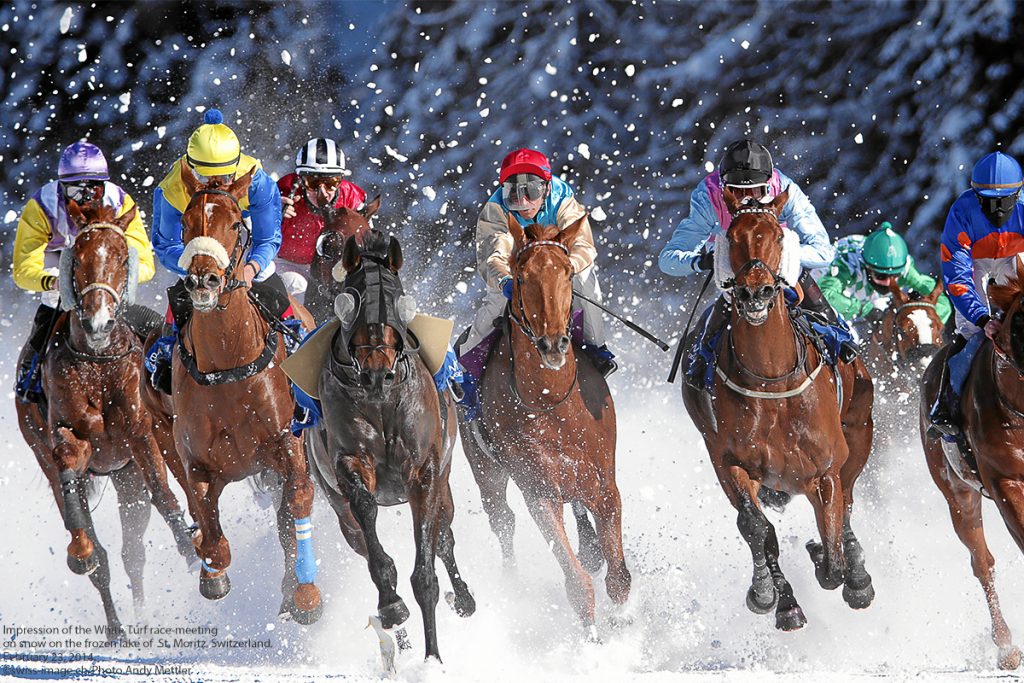 The two trotting races have each received a different number of entries. A dozen entries have been submitted f or the Koller Elektro Prize, among them several winners from previous years, who will come up against horses racing on snow for the very first time. On the other hand, last year’s winner Uranus de Chambe will join a field of seven in theGP Data Quest, up against Spike, who decided two trotting races in his favour twelve months ago. 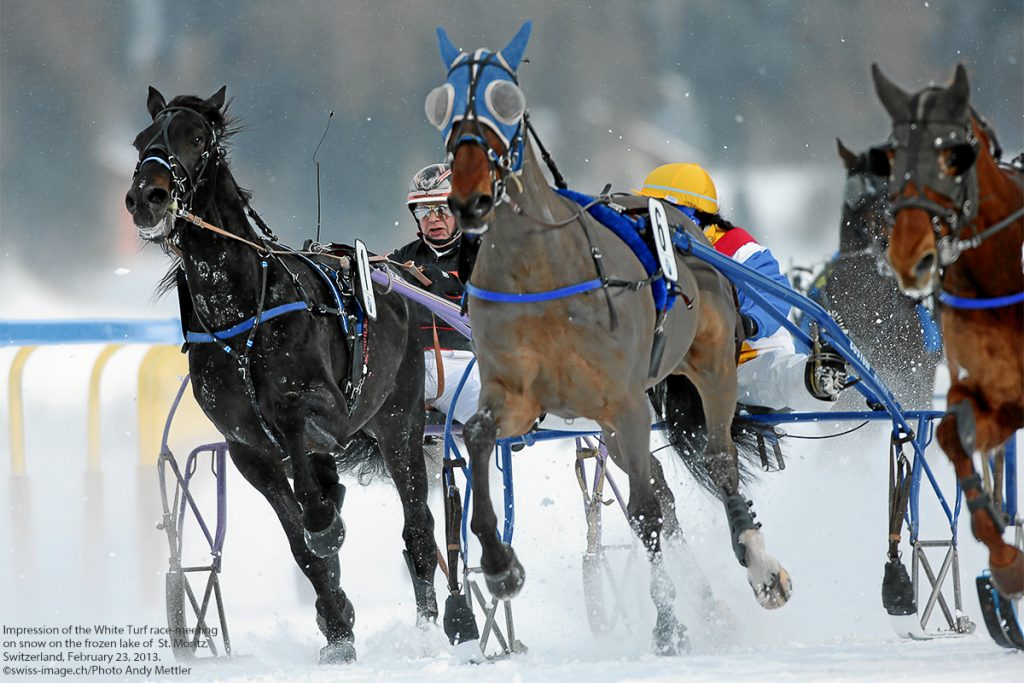 Last year, Valeria Holinger was the first lady in the history of the International Horseraces of St. Moritz to be crowned “Queen of the Engadine”. Every year, this title is offered to the overall points winner in the Skikjöring for the Credit Suisse Skikjöring Trophy. Furthermore, White Turf ’s main sponsor offers the prize money on the occasion of the Credit Suisse King’s Cup, which Valeria Holinger is hoping to defend this year at the reins of the mare Usbekia. Her main opponent is Mombasa, who obtained the highest number of points in 2013 and 2016 with Adrian von Gunten at the reins. In all, nine entries have been received for the Skikjöring. 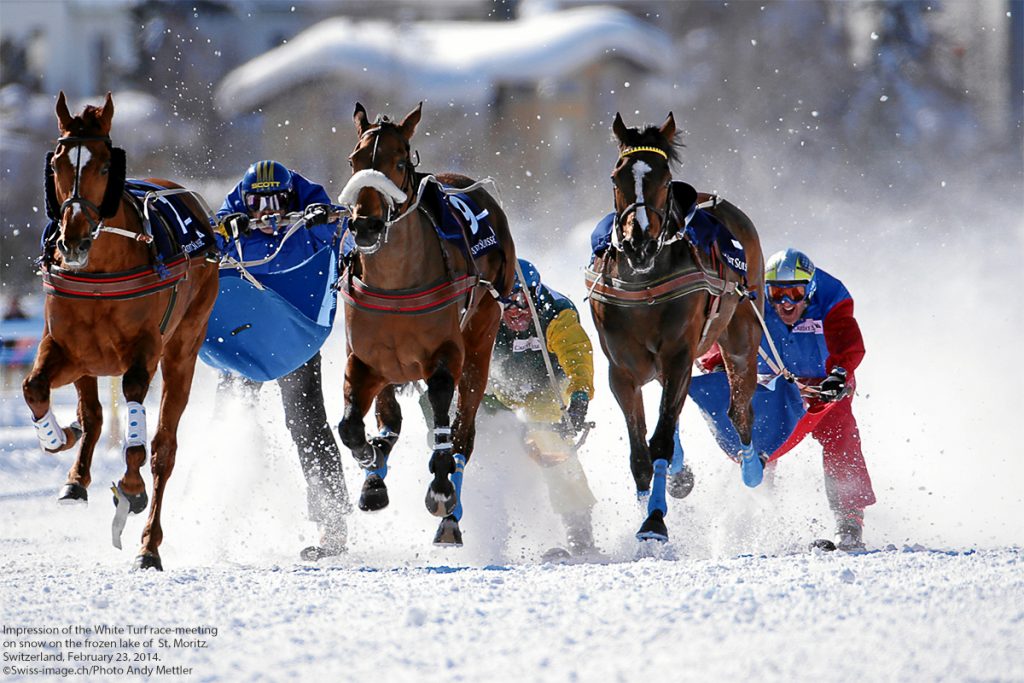 Arab races on the first and the third race Sundays, 4th and 18thFebruary 2018

It has become a tradition that the Arab race H.H. Sheikh Zayed Bin Sultan Al Nahyan Listed Cup is the race with the highest purse on the premiere day of White Turf. 38,500 Swiss francs are up for grabs for the nine horses entered. Nil Aziz, the winner in 2017, is also involved this time. On the final day (18th February 2018) the purse will be 33,000 Swiss francs in the H.H. Sheikha Fatima Bint Mubarak Ladies World Championship (IFAHR), with top lad y jockeys in the racing saddles. 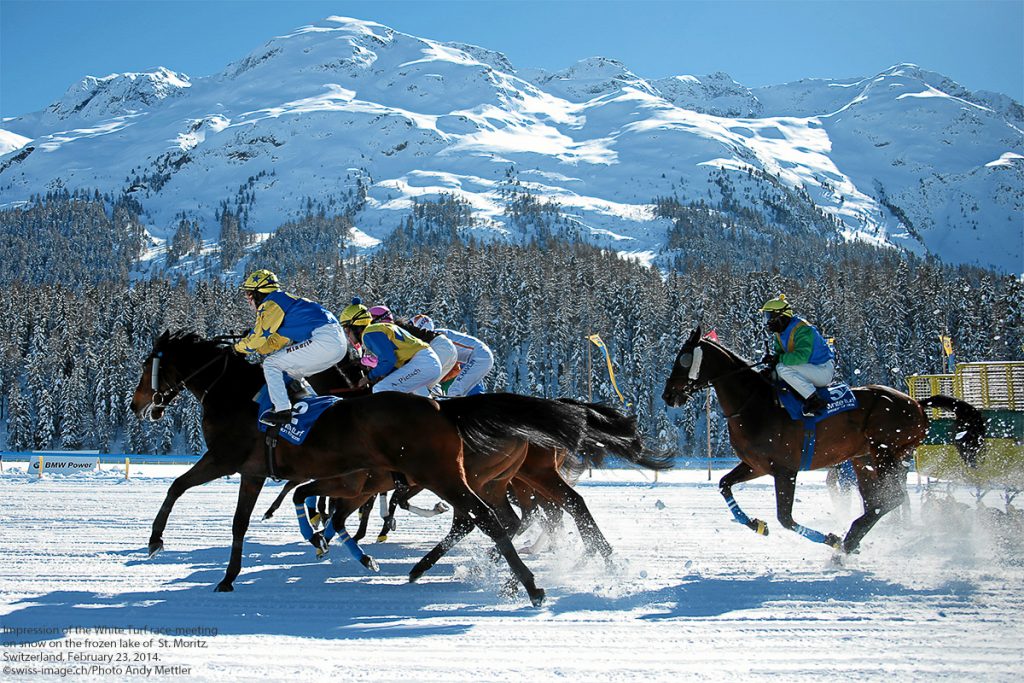 Varied supporting programme with h ighlights for the whole family

Before the races and during the intervals, the tent city on the frozen lake of St.Moritz will offer excellent entertainment possibilities: the exhibitions of the Engadine Handicraft Society are always worth discovering and entice visitors to shop, as does the Merchandising shop with all the latest White Turf merchandise and high – quality accessories. At the stalls run by the local hotels, visitors can let themselves be pampered to their hearts desire with food and accompanying drinks: be it a hearty snack or a delicious gourmet platter and delightful cakes. These indulgences will be accompanied by music al bands of the highest quality providing appropriate sounds on different stages during the White Turf race Sundays. The Swiss Hotel Association St. Moritz is pleased to enchant our young White Turf visitors with pony riding with in the children’s paradise on the frozen lake of St. Moritz, with adults able to put their skills to the test in the horseshoe competition. 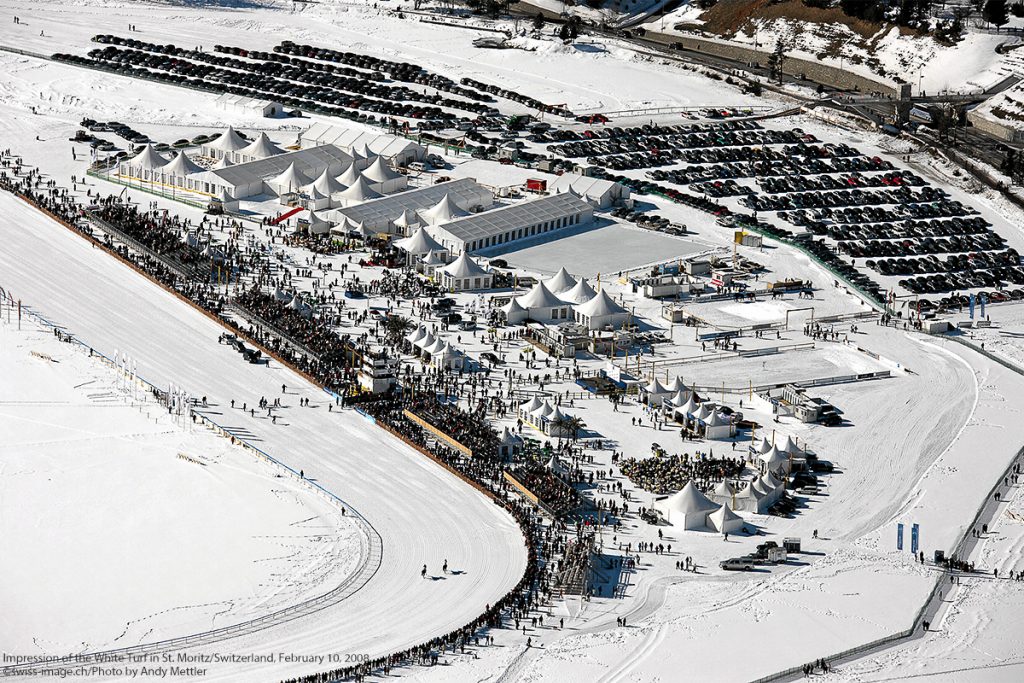 Tickets for grandstand seats and standing places are available at special priceby advance booking either online at www.ticketcorner.ch or dire ctly at the Tourist Information in St. Moritz Dorf.