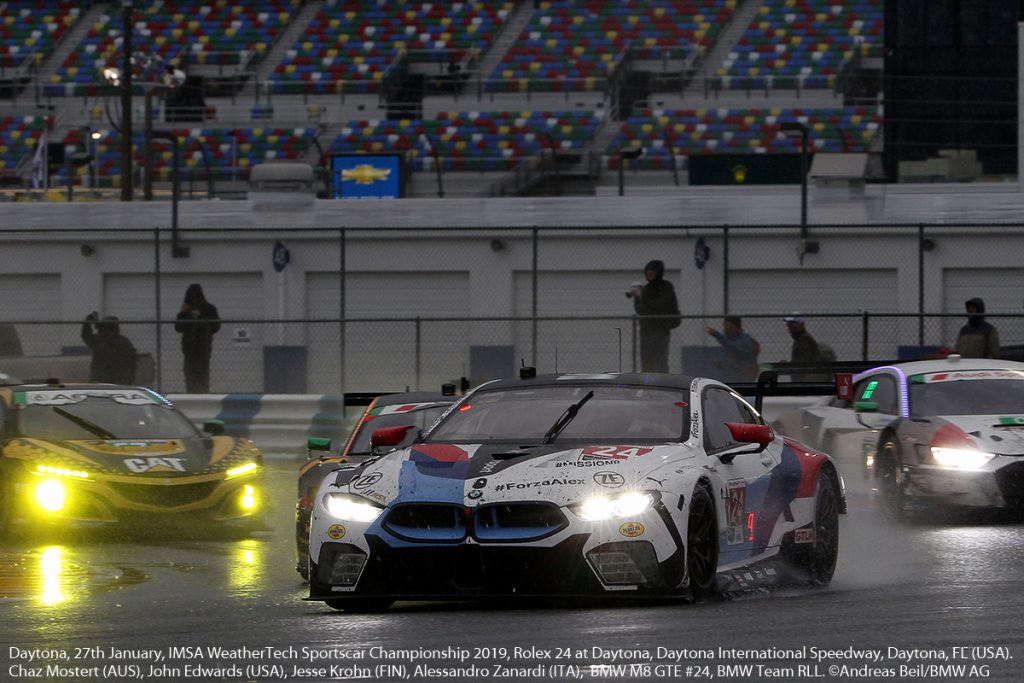 Daytona. BMW Team RLL took victory at the 24 Hours of Daytona (USA) . When the opening round of the IMSA WeatherTech SportsCar Championship was suspended due to heavy rain for the second time, the #25 BMW M8 GTE and drivers Connor De Phillippi (USA), Augusto Farfus (BRA), Philipp Eng (AUT) and Colton Herta (USA) were leading the GTLM class. The race did not resume, leaving the BMW drivers to celebrate victory. The appearance by Alessandro Zanardi (ITA) meant the team’s #24 car was the centre of much attention at the endurance classic in Florida. It proved to be a difficult race for the Italian and his fellow drivers John Edwards (USA), Jesse Krohn (FIN) and Chaz Mostert (AUS). The quartet eventually came home in ninth place. 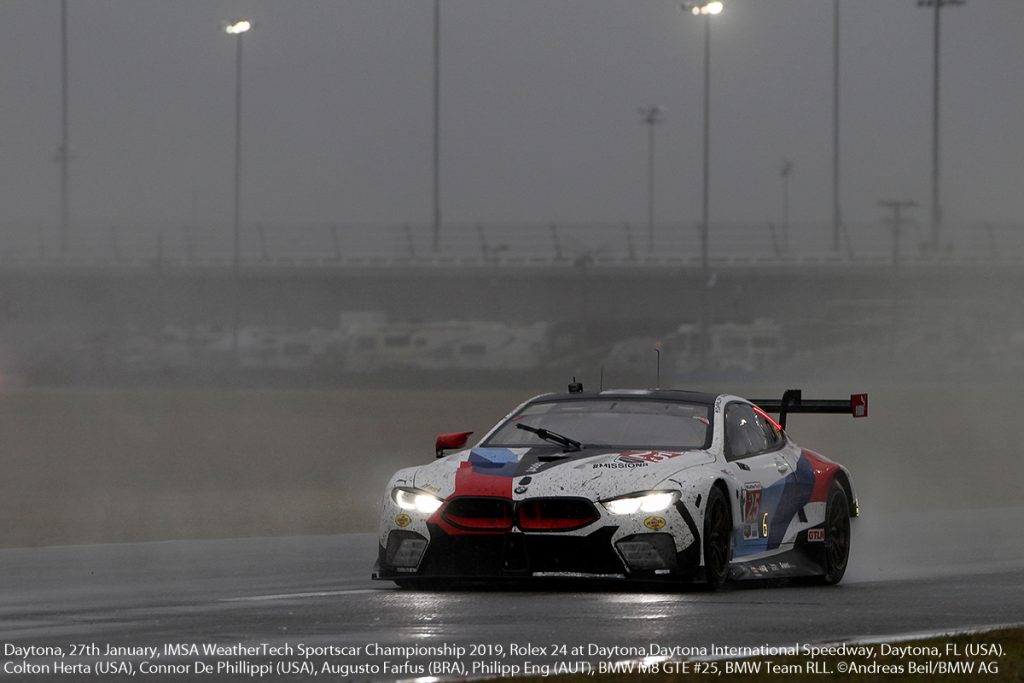 This latest success was the third GTLM victory in the IMSA series for the BMW M8 GTE. BMW celebrated its first win at Daytona back in 1976 with the BMW 3.0 CSL. This was followed in 1997 and 1998 by two class victories with the BMW M3 GTR. Overall victory went to Daytona prototypes with BMW Power in 2011 and 2013. BMW Team RLL finished on the top step of the podium at Daytona for the first time. 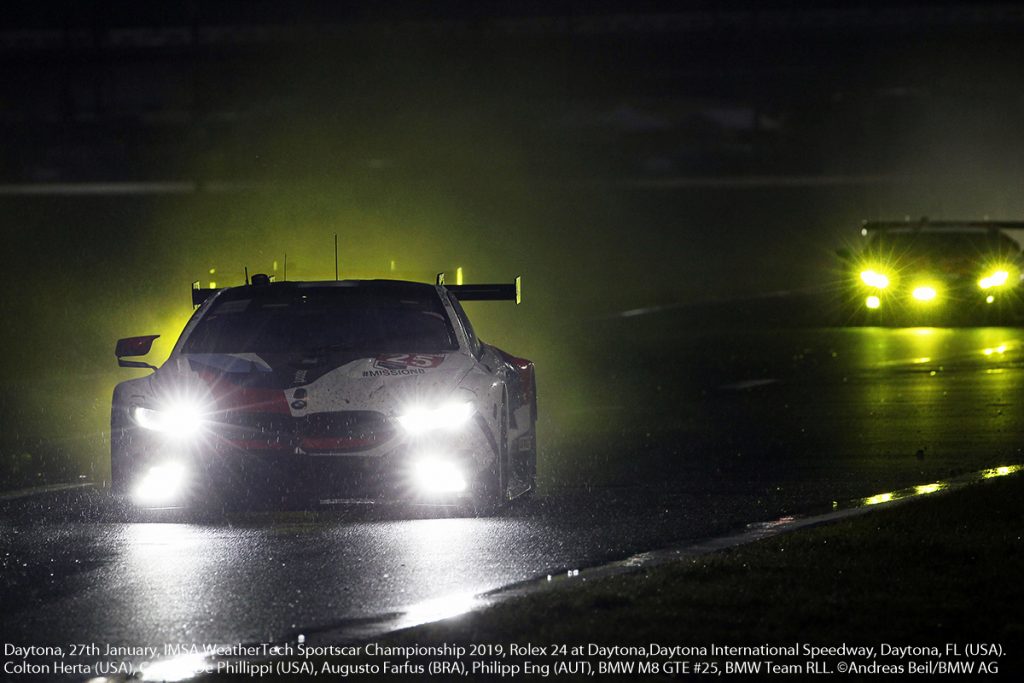 De Phillippi, Farfus, Eng and IMSA debutant Herta enjoyed a largely trouble-free race. Herta set the fastest GTLM lap time of 1:42.908 minutes on lap 64. Heavy rain started to fall during the night, causing the track conditions to deteriorate from lap to lap. With seven hours remaining, race control decided to suspend the 24 Hours of Daytona for safety reasons for the first time. The race resumed under yellow flags roughly two hours later. In total, the 24 Hours was interrupted by yellow flags 17 times. When the cars were free to race again, the BMW drivers held their nerve, avoided making any mistakes and established themselves in the leading group. One lap before the race was suspended for the second time, Farfus, at the wheel of the #25 car, took the lead in the GTLM class. This ultimately proved to be the decisive moment in the race, as the race never resumed and the BMW drivers were left to celebrate a momentous victory. 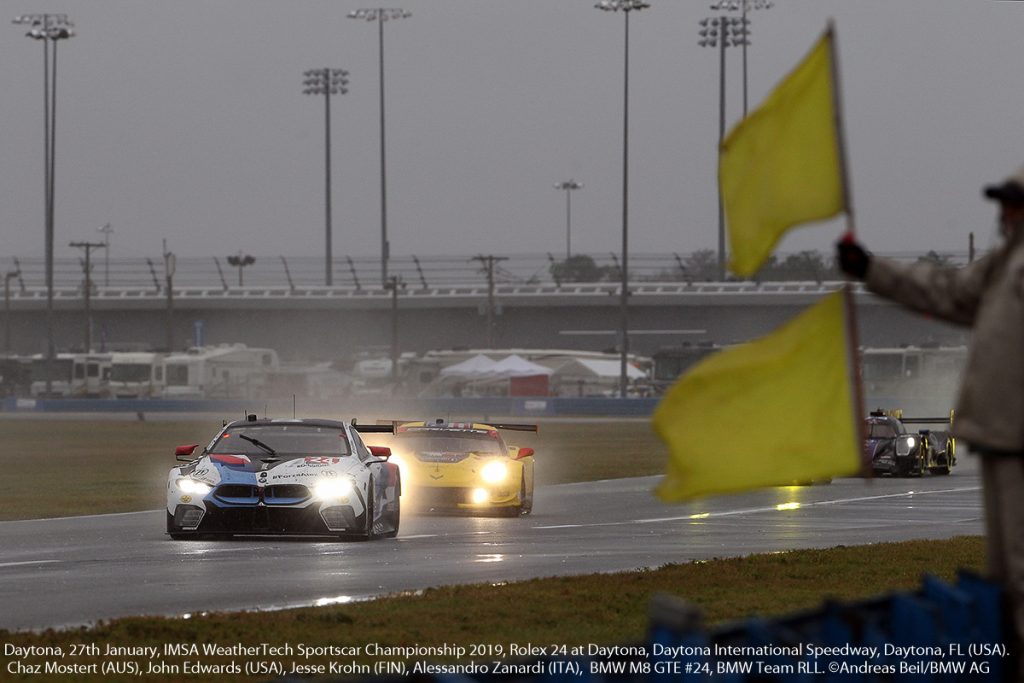 By the first race-suspension, Zanardi and his team-mates were already several laps behind the GTLM leaders, following a number of stops for repairs on the #24 car. At the end of a pit-stop in the early stages of the race, the car was dropped off the air jacks at the very moment that Alex Zanardi, who lost both his legs in a crash in 2001, was pushing his specially adapted steering wheel into place on the column. As a result of the jolt, the column was damaged and Zanardi couldn’t engage the steering wheel correctly. This coinciding of the two actions had never occurred in testing. The necessary repair work cost the #25 crew a lot of time. As the race continued, the BMW M8 GTE dropped further back, as a result of several smaller incidents. However, quitting was no option for Zanardi and his fellow drivers. Despite having little luck in the race, the appearance of the former ChampCar champion proved very popular at Daytona – with drivers, teams and fans alike. 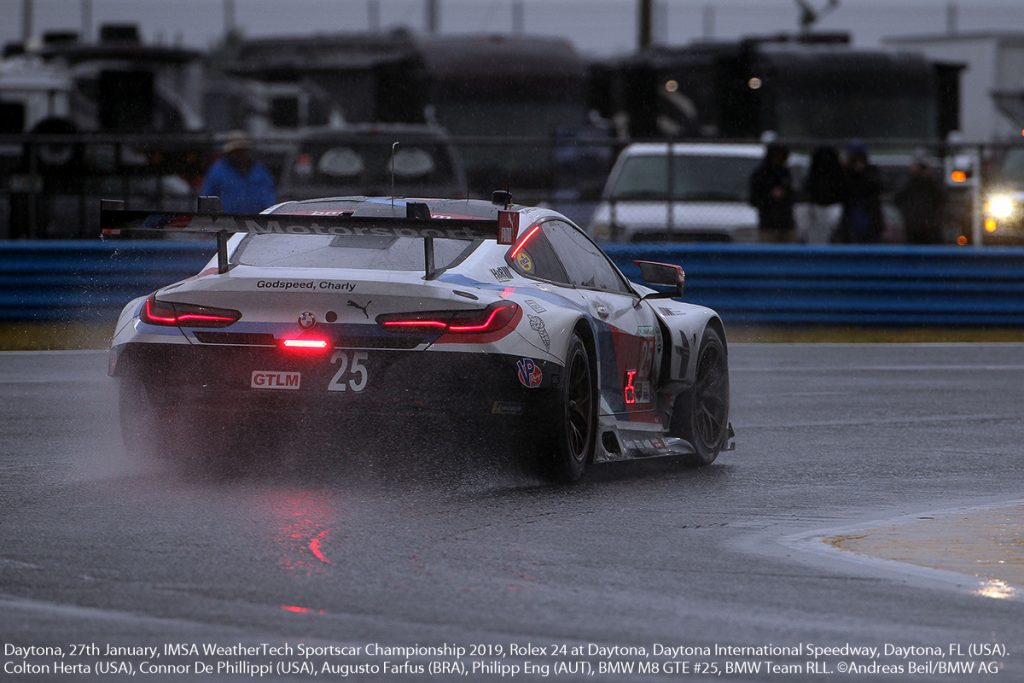 Turner Motorsport raced with the #96 BMW M6 GT3 in the GTD class. After 560 laps, the team and drivers Jens Klingmann (GER), Bill Auberlen (USA), Dillon Machavern (USA) and Robby Foley (USA) finished tenth.
The race weekend was overshadowed by the news of the sudden death of long-term Schnitzer team principal Charly Lamm. In memory of Charly, BMW Team RLL competed with the words “Godspeed, Charly” on the rear of both BMW M8 GTEs at Daytona. 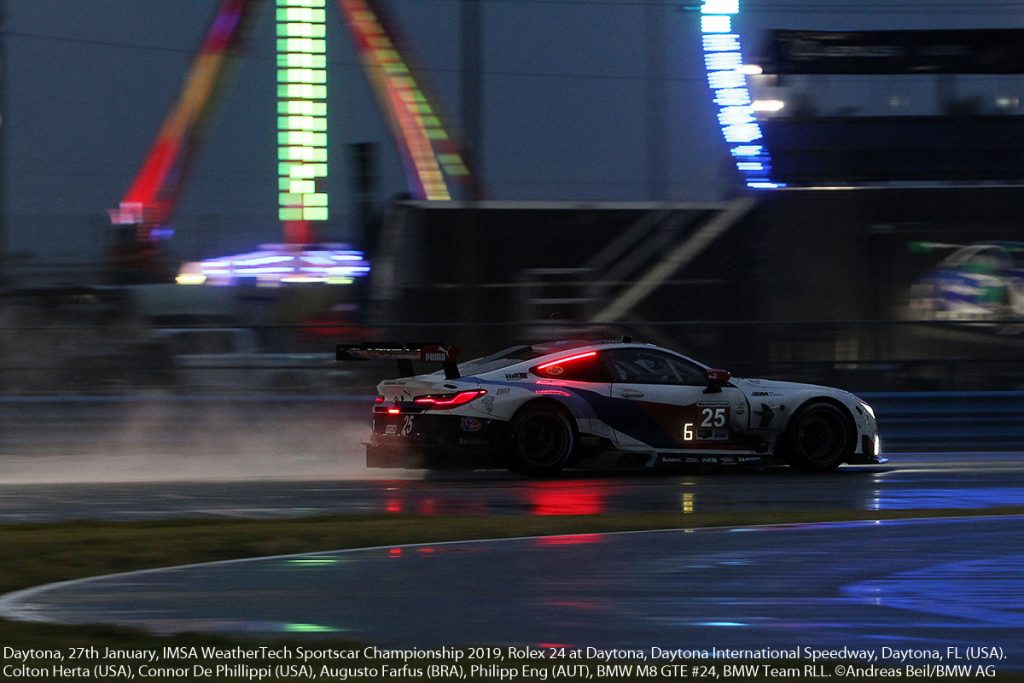 “What a race, and what an emotional win – and during such difficult days for the entire BMW Motorsport family. To stand on the top step of the podium here at Daytona after such an eventful and unpredictable 24 Hours is absolutely fantastic. Congratulations to Connor De Phillippi, Augusto Farfus, Philipp Eng, Colton Herta and everyone at BMW Team RLL. Congratulations also to our team in Munich, who have moulded the BMW M8 GTE into a real winner. We can be very proud of this success. Although the drivers of the #24 car had to settle for ninth place, after enduring a lot of misfortune during the race, they made BMW Motorsport history together. Alessandro Zanardi’s appearance sent a buzz through the racing community at Daytona and beyond. Together with Jesse Krohn, John Edwards and Chaz Mostert, Alex battled like a lion and refused to be disheartened by the set-backs in the race. That is precisely what makes him so special, and why the fans love him. Alex and his fellow drivers can also feel like winners after this race. We would like to dedicate this success to Charly Lamm. His loss is just as painful today as it was on Thursday, when we received news of his death. He would have wanted us to fight to the final lap here. We did that – and won it for him.” 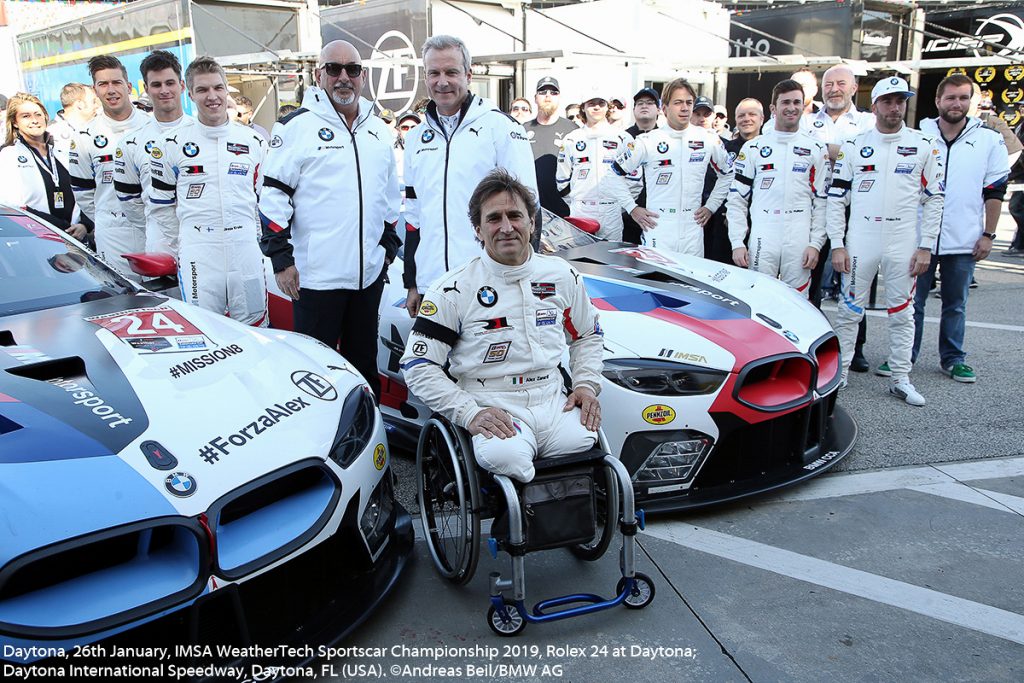 “What a great fight! Winning at Daytona is very special. When you consider where we finished here last year, then you cannot rate the effort of the entire team highly enough. Congratulations to the complete crew of the #25 car. But compliments also go to the #24 team, which unfortunately had a few issues in the race.”

“That was a really crazy race, with dry conditions, rain and cold. My team-mates did a fantastic job. The car still looks new, even after 24 hours. Augusto, in particular, did an incredible job in the rain. We were able to show that our BMW M8 GTE is very reliable and competitive in all conditions. The whole team did a perfect job. We are Daytona winners. Incredible!” 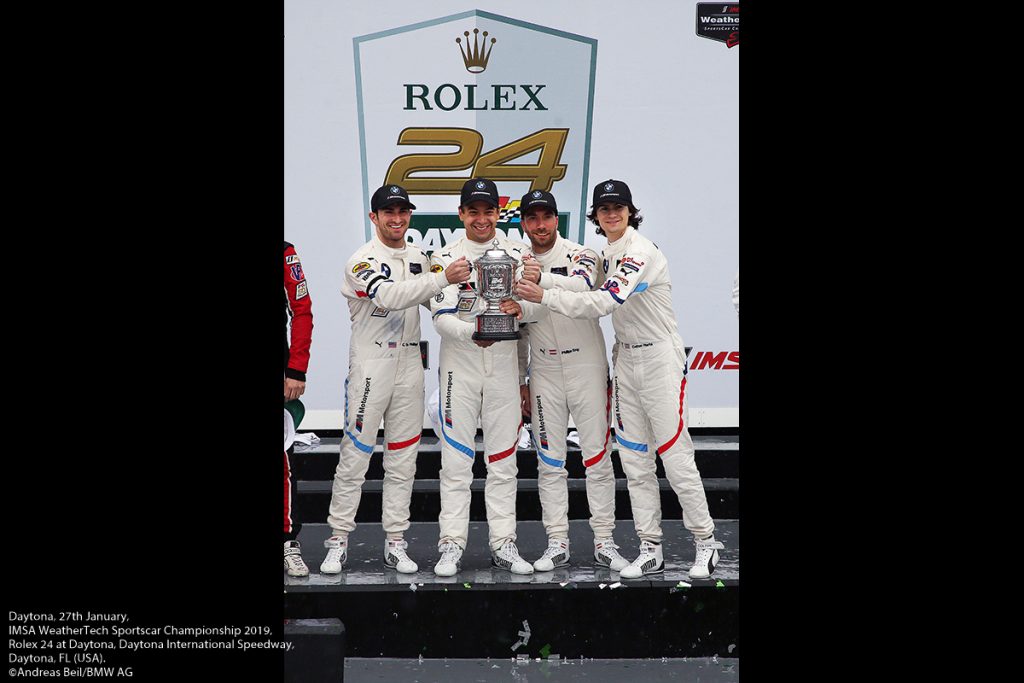 “This win is magical and of special significance to me. A few days ago, I lost a very important person in my life. I am sure that Charly was with me on the way to this success, so the win is for him. Now it is time to celebrate!”

“The tension in the final few hours was almost unbearable. We did not make any mistakes for 24 hours – and this is the result. We were able to match the pace of the others in the dry. But it is impossible to describe what Augusto then did in the rain. It was a joy to watch him and I am proud to have a team-mate like that. This victory is for Charly.”

“That was spectacular! Strictly speaking, it was my first GT race ever – and with such a fantastic outcome. The best thing about it was my stint in the night, when the top five of the GTLM class were bunched closely together and we were battling for position. Then Augusto was simply incredible in the rain. He led us to the head of the field. I just cannot believe it all.”

“We have an incredibly intense race behind us – won by BMW. I am delighted. After all, I am part of the team, so I also feel a bit like a winner. Congratulations to the guys. Augusto, in particular, did an incredible job. From a sporting point of view, we did not achieve our goals with the #24 car. I feel incredibly sorry for everyone who worked so hard on this project, both in Munich and here in the USA. We really tested countless possible scenarios in the run-up to the race, and then something happens in the first pit-stop which has never happened before. But that is motorsport for you. We just have to accept it. That aside, my appearance here at Daytona, with all the fantastic reactions from the fans, colleagues and opponents has been like a fairy tale. I would like to say a big thank you to BMW Motorsport and BMW Team RLL for one of the best experiences of my life.” 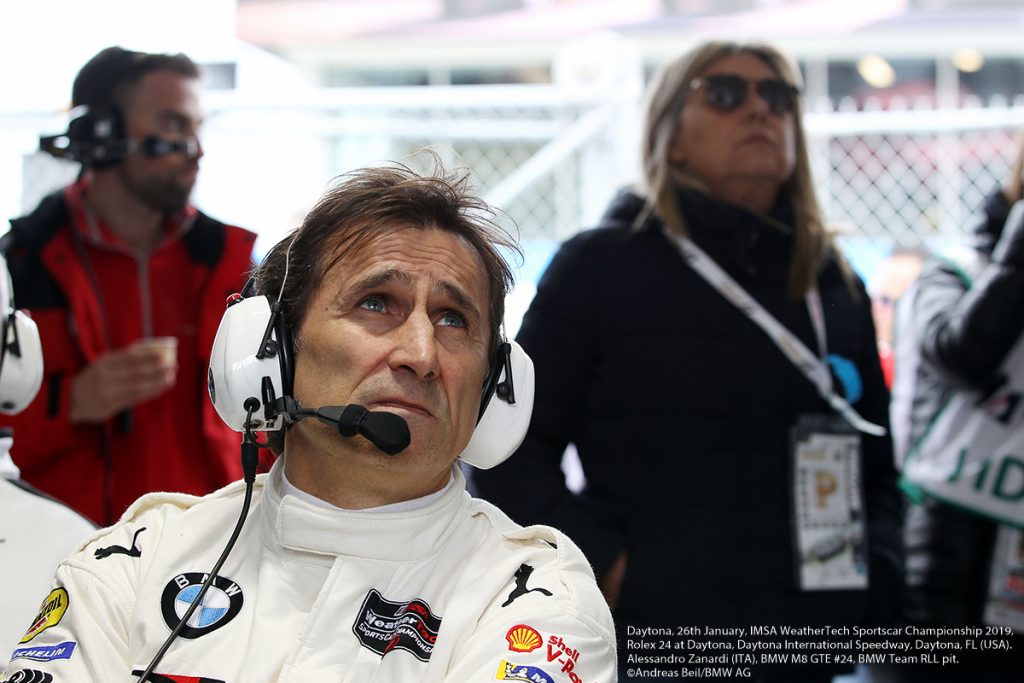 “The past few months, with all the testing I did with Alex Zanardi and the other guys, were a very special experience. It was an honour to work with such a fantastic character as Alex, both on and off the track. Unfortunately, the race was disappointing for us, as we had a few incidents too many in order to achieve a positive result. However, as a team we are obviously very pleased with the victory for the #25.”

“That was a tough race, in which we simply did not have any luck. The heavy rain did not make it any easier. It was impressive to see how Alex was able to keep the car on the track at all in those conditions, with the extreme aquaplaning. I am delighted that it worked out so well for the #25 car. The team really deserved it after all the hard work they did preparing for the race.”

“A number of factors were behind us not achieving the result we had hoped for in this race. However, all in all, competing in this race and working with a special person like Alex Zanardi, not forgetting John Edwards and Jesse Krohn, has been fantastic for me. I will never forget this amazing experience.”