Brittany’s rural church closes are renowned in France for their charming looks. With their quaint and curious embellishments, they have the power to pull you in, even if you’re not religious. Competition between neighbouring parishes could be intense, most remarkably around Finistère’s Monts d’Arrée. 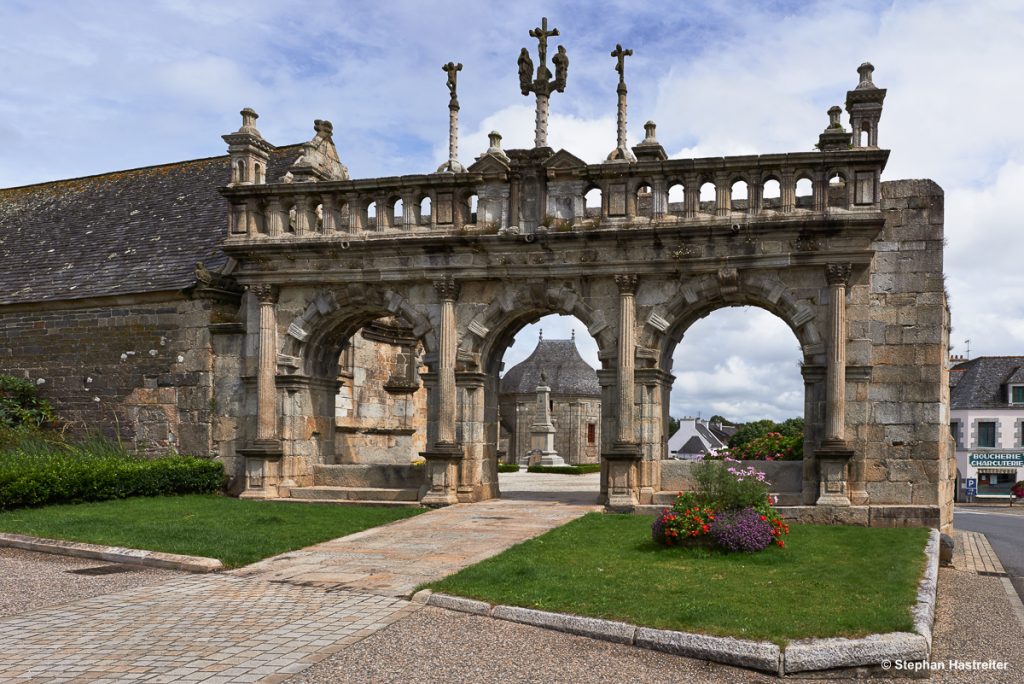 The Sizun Parish close  (Enclose paroissial) is located at Sizun in the arrondissement of Morlaix in Brittany in north-western France. The “enclos paroissial” or parish close comprises the Église Saint-Suliau, a sacristy, an ossuary or funeral chapel and a “porte triomphale” giving access to the enclosure. The enclosure is listed as an historic monument.

Access to the Sizun “enclos paroissial” is through an “Arc de Triomphe” like structure with a total length of 15 metres, built between 1585 and 1590. A life size reproduction of the Sizun entrance was shown at the 1989 “Commémoration du Bicentenaire de la Révolution française” held in Paris’ Jardins des Tuileries. The structure has three arches separated by flutedcolumns with Corinthian capitals and is surmounted by a double stone balustrade from which emerge the three crosses of a Calvary. At each corner of the balustrade is a “Lanteron” (a lantern-lke structure). The upper gallery of the “Arc de Triomphe” was accessed by a stone stairway so priests would have been able to preach from there in the open air but this was removed several years ago to assist the flow of traffic.

The Saint-Thégonnec Parish close (Enclose paroissial) is located at Saint-Thégonnec  (Sant Tegoneg in Breton) in the arrondissement of Morlaix in Brittany in north-western France. The enclos paroissial comprises the parish church of Notre-Dame, a triumphal arch and enclosure wall, an ossuary and the famous calvary (Calvary at Saint-Thégonnec  ). There is a second calvary set into the enclosure wall and the war memorial dedicated to those lost in the 1914-1918 war is also set into another section of the wall.

On 8 June 1998, a fire destroyed a part of the north aisle and an extensive programme of restoration was finished in 2005. The Gothic bell-tower and Renaissance tower dates from 1563 and was finished in 1626. The porch has a sculpture depicting Saint Thégonnec in the attire of a bishop and inside the porch, statues of some of the apostles lead towards the door into the church. The church has a rood screen and in the choir area the stained glass is by Jean-Louis Nicolas and dates to 1862-1863.

According to a legend, Saint Thégonnec, who originally came from Wales and was a disciple of Saint Pol Aurélien, had tamed a stag and used it to pull his cart which carried stones to build the church he was constructing. One day a wolf attacked and ate the stag but Saint Thégonnec preached to the wolf and persuaded it to replace the stag and pull the cart. Depictions of Saint Thégonnec therefore usually portray him accompanied by a stag or a wolf.

The Guimiliau Parish close ( Enclose paroissial ) is located at Guimiliau in the arrondissement of Morlaix in Brittany in north-western France. The parish takes its name from Saint Miliau who was beheaded in 792 on his brother’s orders. He is a saint called upon by those suffering from ulcers and rheumatism.

The parish close dates from the 16th and 17th-century and comprises an “arc de triomphe” style entrance, an ossuary, a bell-tower, an elaborate porch, a funeral chapel, a cementry and a church with a baptistery a pulpit, altarpieces, a sacristy, an organ, and the unusual Calvary at Guimiliau.

The Guimiliau calvary is enormous and the statues displayed on it cover 37 scenes from the life and death of Jesus Christ. It comprises an octagonal base with arched corners/buttresses. The statues are spread over the surface (platform) of this base and along the frieze which runs around it. A single cross with crosspiece rises from the platform. It was built between 1581 and 1588. The date 1581 was inscribed on the architrave above the altar on the east facade and 1588 appears near the figure of the Virgin Mary in the scene depicting the Adoration of the Magi. The calvary was restored in 1881 and the lichens cleaned off in 2009. The buttress on the north-east corner has a small stairway leading up to the main surface of the platform. This enabled the calvary to be used as a pulpit. The priest could deliver a sermon, surrounded by pictorial representations of the stories he would relate to a largely illiterate congregation. Each buttress has a niche on the outer side in which there are depictions of the Evangelists each sculpted with their attribute. 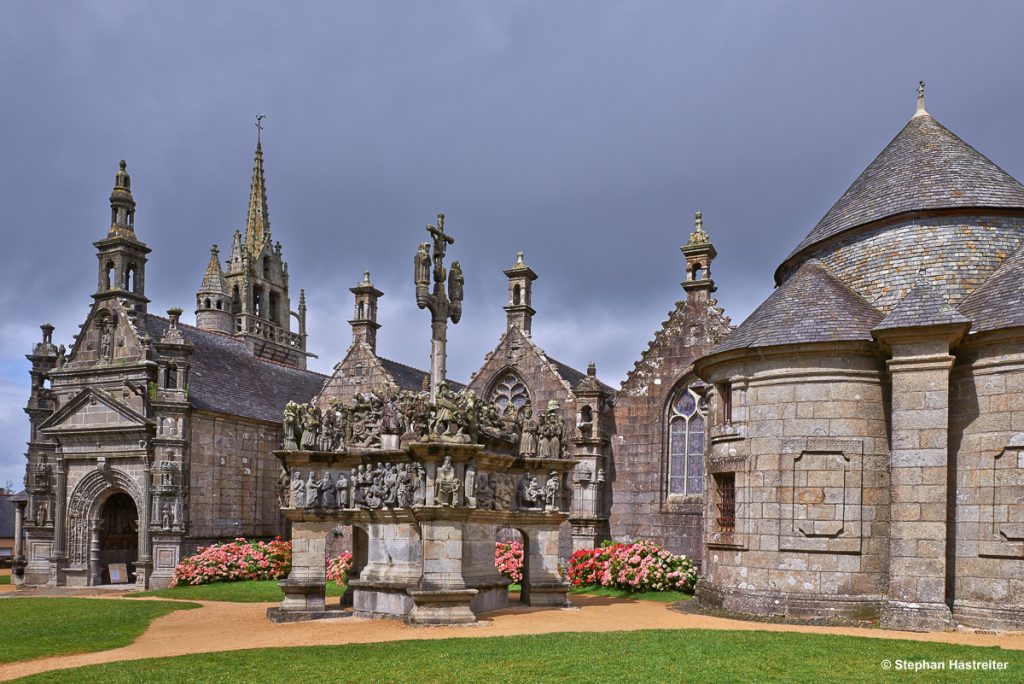 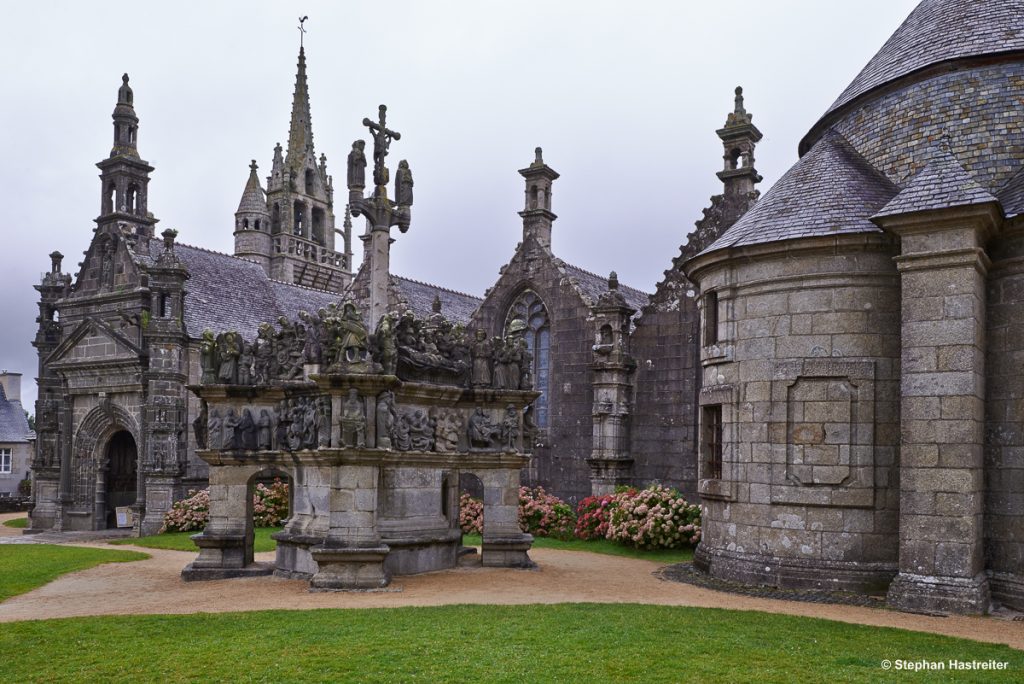 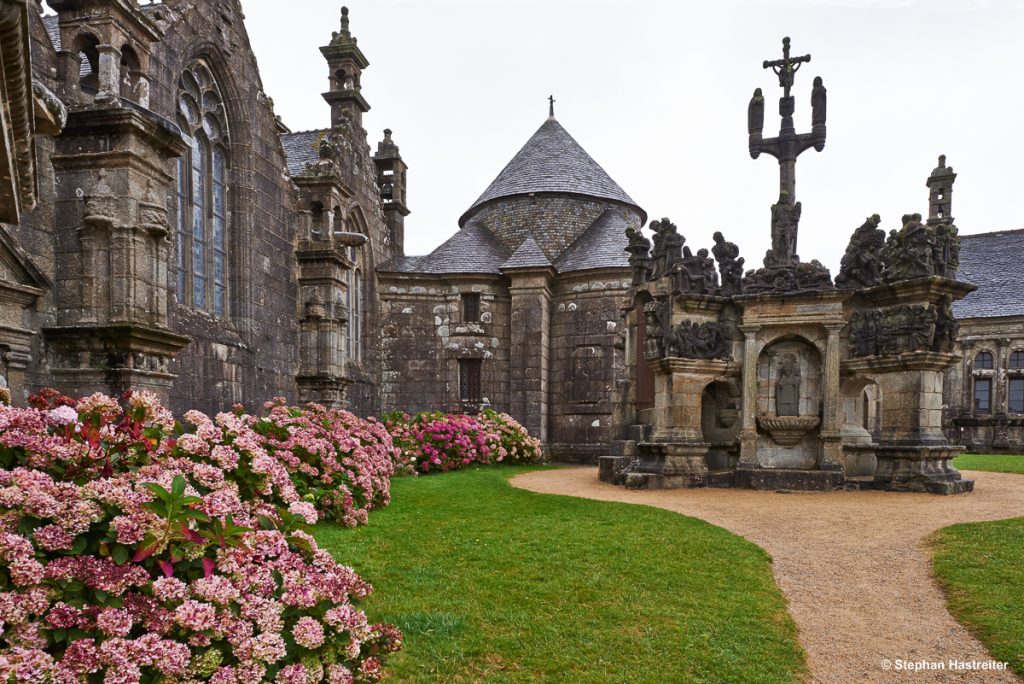 The Calvary dates to 1555 and most of the sculpture involved was executed by the workshop of Henry and Bastien Prigent who also worked on the Plougonven and Lopérec calvaries. Originally a statue of St Germain had been part of the calvary but this was moved to the church porch. This statue is inscribed “EN L´HONNEUR DE DIEV ET (NOTRE) DA (M) E ET MONSIEUR S GERMAIN CESTE CROIX FVST COME (N) CE 1555” and this has been used to fix the calvary’s date. In 1650, it was enriched by the addition of several new sculptures including the Entry into Jerusalem, the Last Supper and the scene where Jesus is washing Peter’s feet. These were the work of the Yves Ozanne studio/workshop in Brest. Originally it was placed near the church porch but between 1738 and 1742, it was moved to improve access to the church. This work was carried out by the Pleyben entrepreneurs, Guillaume Le Goff, Yves Quiniou and François Motreff, and it is thought that at this time the structure could well have been modified and enlarged. The calvary has been restored on several occasions notably in 1953 and more recently in the years 1980 to 1990. The granite used came from a quarry near Gulvain.

It has two distinct levels. The lower level comprises a corniche running around the entire structure and the upper level or platform. Four buttresses strengthen the calvary and an arcaded passage runs through the centre producing an Arc de Triomphe like effect. The statuary decorating the calvary, placed either on the platform or on the corniche, is carved from kersanton stone or in some cases from grey arkos, a stone less resilient to erosion. The calvary should be read anti-clockwise starting with the Annunciation on the corniche of the southwest buttress and ending with the Crown of thorns episode, whereas on the platform, one’s reading should start with the “Ecce Homo” scene and finish with the “Descent into Hell”. The “Mise au tombeau” is placed in the centre. The sculptures on the lower level (the corniche) are smaller than those on the platform.