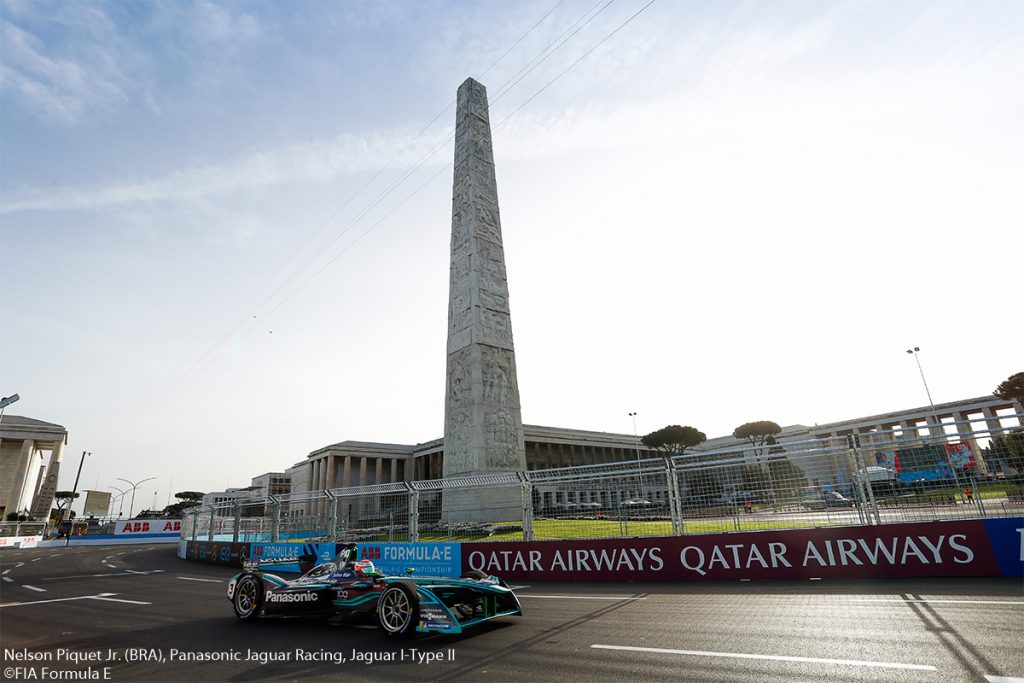 ROME, ITALY (April 14, 2018) – Sam Bird held his nerve in the closing laps of the CBMM Niobium Rome E-Prix presented by Mercedes EQ and fended off multiple attacks from both Lucas di Grassi and Mitch Evans to etch his name in the history books as the first-ever winner on the streets of the Italian capital. 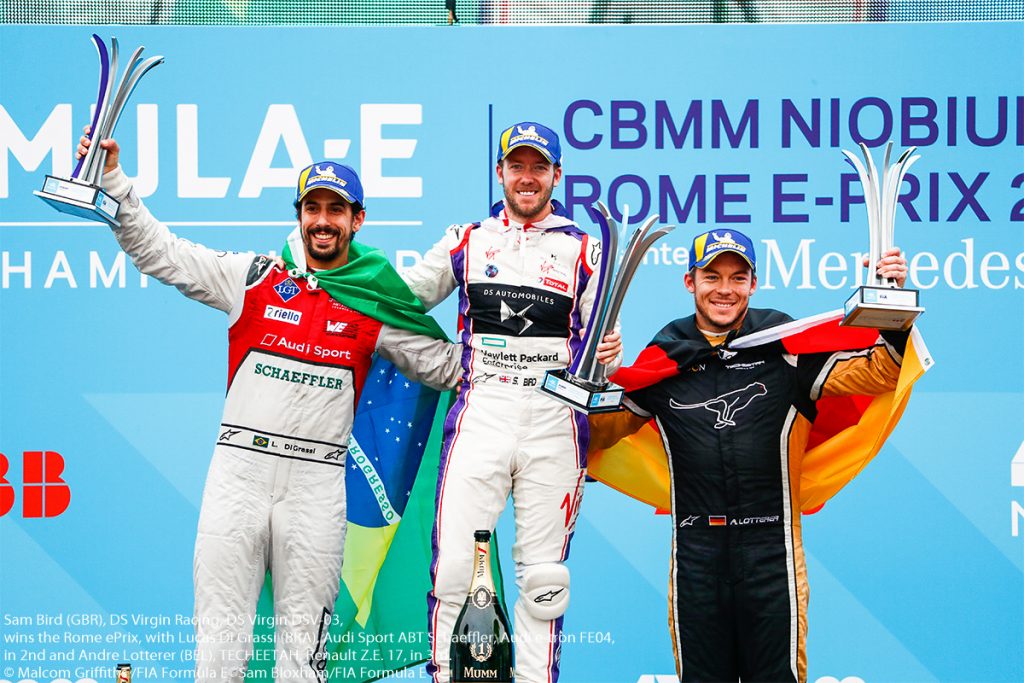 ‘I sit here very proud to be the winner of the first-ever Rome E-Prix. The crowd was amazing and everybody looked like they were having fun.’

The DS Virgin Racing driver pumped his fist in the air as he crossed the finish-line to complete an assured drive under mounting pressure – from not one, but two drivers – as the laps counted down in the inaugural race in Rome.

Bird defended his position at the head of the field with Evans and di Grassi looming large in his mirrors. Making a slight mistake, Bird opened the door to Evans who swerved into the slipstream of the now seven-time E-Prix winner down the hill approaching Turn 9. The Panasonic Jaguar Racing driver tried to make a move on the outside with smoke pouring from his tyres, but to no avail as Bird kept his cool.

Di Grassi reeled Bird back in to heighten the tension in the final laps, but it wasn’t enough to deter Bird who picked-up his first win since the season-opener in Hong Kong. The result vaults the Brit to within striking distance in second place in the standings – 18 points adrift of table-topper Jean-Eric Vergne. 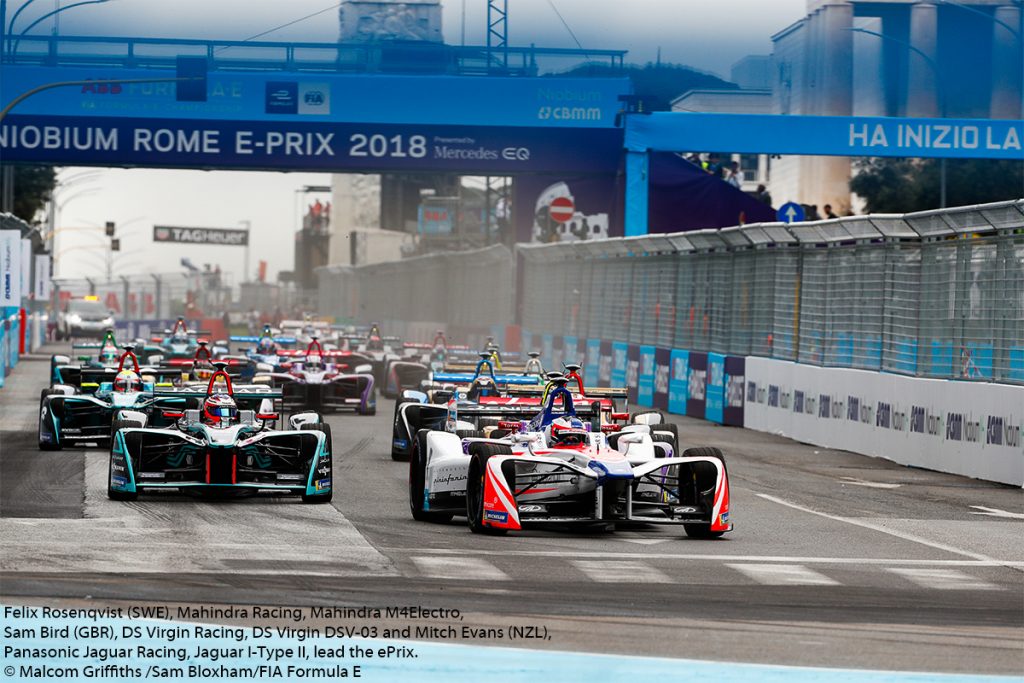 Despite picking-up maximum points for first place, it wasn’t a guaranteed victory from the start as Felix Rosenqvist retired from the front mid-way through the race and gifted Bird the lead. The super Swede led away from Julius Baer pole position and looked to be in control after the car swaps, but Rosenqvist pulled over to the side of the track with broken left-rear suspension.

After a faultless day up to that point, Rosenqvist seemed on course to close the gap on Vergne at the top of the ABB FIA Formula E Championship, but it was to be Bird who would reduce the deficit

Rosenqvist now sits 37-points behind Vergne following technical problems in Mexico and salvaging points in damage limitation mode in Uruguay. The Mahindra Racing driver will need to turn it around in Paris, but as Bird has proved – one race can change the outlook of the championship.

Another race and another second place for reigning champion Lucas di Grassi. The Brazilian has been so close on the previous two occasions – going bumper-to-bumper with Vergne in a nail-biting finish in Punta del Este and now hunting down Bird in front of thousands of raucous Roman fans.

With more usable energy after stopping one lap later, Andre Lotterer closed in on the leading trio – making it a four-horse race. The TECHEETAH driver fought hard to steal third place from Mitch Evans and almost exchanged blows through the tight section alongside the Obelisco di Marconi. It’s Lotterer’s second podium in Formula E in only his seventh race.

It was heartbreak in the end for Evans as the New Zealander still has to wait to stand on the podium in Formula E – having missed out on the opportunity previously. The heat of battle left Evans without enough energy and he limped home across the line in ninth. 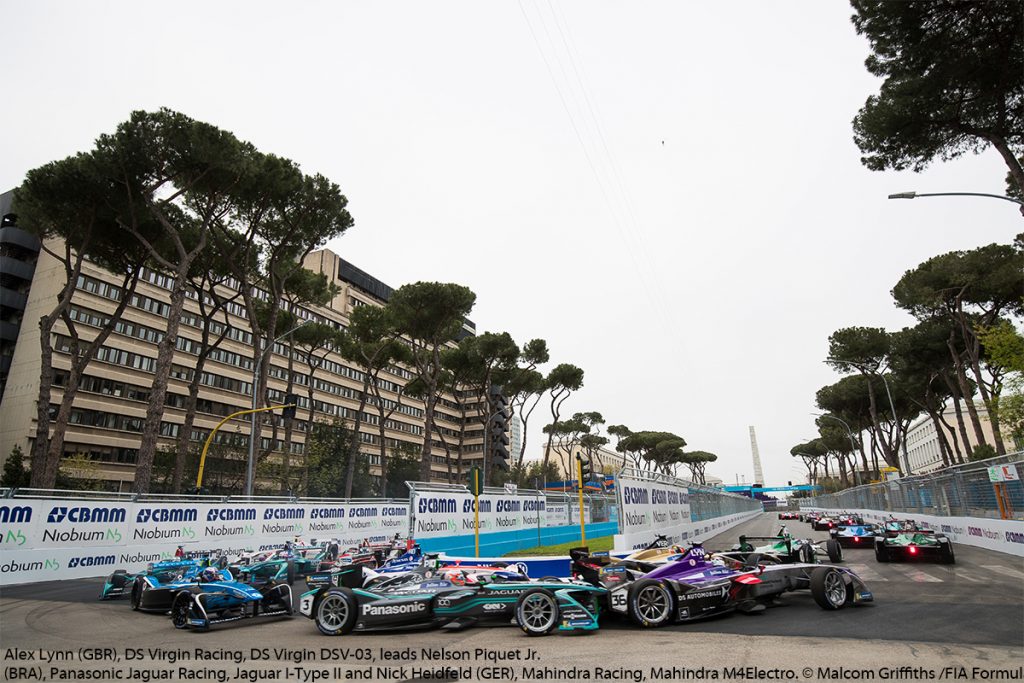 Daniel Abt made his way through to fourth from ninth on the grid and earned the extra point for Visa fastest lap, with championship leader Vergne coming home in fifth. The Frenchman struggled during the opening stint after being hit from behind by Alex Lynn and losing his rear wheel guard. Lynn mounted the back end of Vergne’s car and was lucky not to completely remove his rear wing and force the TECHEETAH driver into making an unplanned pit stop.

Season two champion Sebastien Buemi couldn’t maintain his starting position as di Grassi used FANBOOST to make a move on his rival and former nemesis. The power of the fans left the Renault e.dams driver helpless to defend with Buemi eventually coming home in sixth place.

Jerome D’Ambrosio could barely see the start-lights from 18th on the grid, but drove a controlled and consistent race to make up over 10 places to secure seventh position. Maro Engel took the chequered flag in eighth with Evans and Venturi team-mate Edoardo Mortara rounding-out the top-10. Home hero Luca Filippi recovered from a four car pile-up – including Mortara, team-mate Oliver Turvey and Nick Heidfeld – to finish in 13th.

With the first race of the European leg coming to a close, Formula E heads to the French capital for the third edition of the Qatar Airways Paris E-Prix on April 28 – round eight of the ABB FIA Formula E Championship. 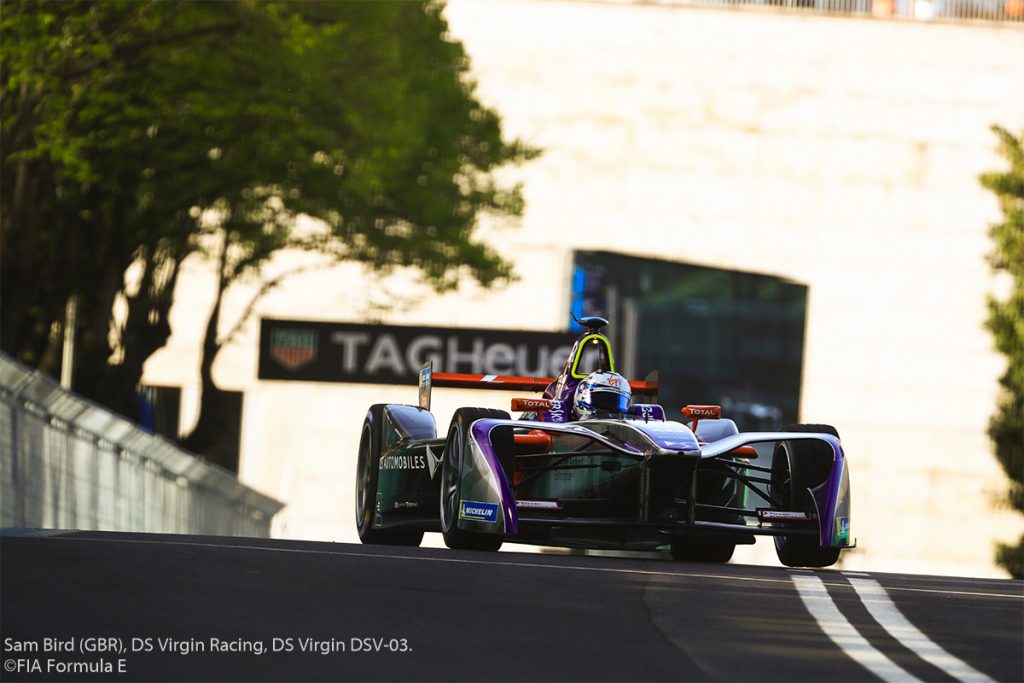 “I honestly didn’t think I’d be sitting here today. When I saw the pace of Felix in the race, I thought the best I can hope for is probably 18 points. I don’t know what happened with Felix – it didn’t look like he hit a wall or anything. Apparently, he hit a curb too hard and its broken the suspension, which is a shame for him and that gave me the lead. I had to get my head down again and try and position my car in the right places at the right time with the right amount of energy for the last lap, because I knew Lucas would be hunting me. So I tried to give myself the best scenario and it worked out well. I didn’t think that we’d be in this position at the beginning of the year, I thought that we would struggle a little bit more with what we were bringing to the table, but we’ve maximised everything. I sit here very proud to be the winner of the first ever Rome E-Prix. The crowd was amazing and everybody looked like they were having fun.”

“First of all, nobody can say this event was average, it was extraordinary. The podium that we just came from was absolutely fantastic. My race started quite badly because I didn’t expect Buemi to go so close to the inside at the start and then stop very early. So this allowed everybody to jump on the outside, so I was basically sitting behind him waiting and I lost some places. Then I think I came from ninth or eighth, I was somewhere around that trying to overtake one by one. I managed to do it, so I did a very conservative first stint trying to save energy – attacking at the very end and did a good pit stop. Then used the FANBOOST to overtake Buemi who was struggling with energy anyway and then at the end it was pretty intense, because Mitch was chasing Sam and I was just looking and stayed close in case something happen ed.”

“I have a second and a third – now I’m missing number one. It was a really exciting race. I realised I’m still learning a lot racing these guys, it’s quite interesting how you play your cards. I’m still a bit fresh on that. Lucas came flying past and this also kind of changed my race, then I was also coming back fighting. I saved a bit too much energy and the performance was good, but I learned a lot again today and I’m happy to be on the podium… I’m getting it bit by bit.”

– Qualifying margin; Felix Rosenqvist took pole position by over six-tenths, the biggest gap to second place since the Visa London E-Prix in 2016 – when Sebastien Buemi eclipsed Nico Prost by 0.915s.

– Dry seasons; The drought continues with Formula E still yet to have a wet race after 40 E-Prix across almost four seasons.