New York, Sunday, April 29 –  McLain Ward (USA), hailing from Brewster, NY, thrilled a hometown crowd with a flawless triumph in the $382,800 Longines Grand Prix of New York during the final day of the highly-anticipated Longines Masters of New York on Sunday, April 29. Making its long-awaited debut in the heart of the Empire State as the American Grand Slam, the Longines Masters celebrated its 25thcompetition with an event on American soil as part of Season III of the Longines Masters Series after events in Paris and Hong Kong earlier in the season. 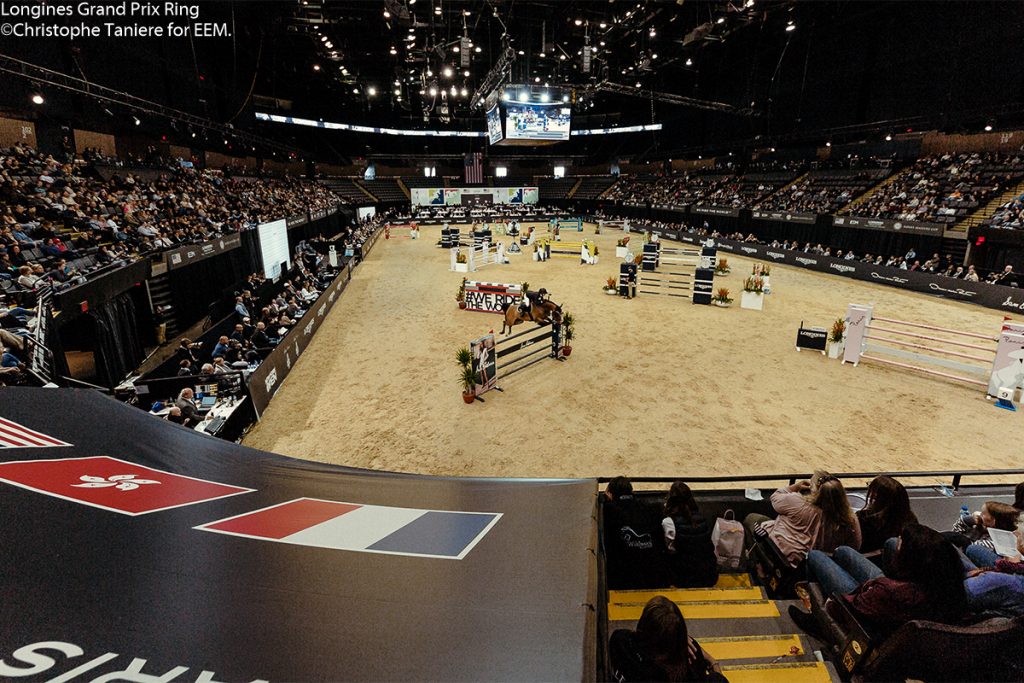 In front of an exhilarated crowd at NYCB LIVE, Home of the Nassau Veterans Memorial Coliseum, the 2017 Longines FEI World Cup™ Jumping champion and three-time U.S. Olympic medalist led a victory gallop that represented the world’s greatest show jumping talent. Ward and Clinta, an 11-year-old Oldenburg mare by Clinton x Lord Pezi, were the pair to beat in a star-studded jump-off over courses conceived by Dutch course designer Louis Konickx.

The Longines Masters of New York saw top sport throughout four days of competition and Konickx’s tracks rose to the occasion each day. Stopping the short-course clock in a blistering 34.92 seconds, Ward commented on the course designing team, saying, “[Course design] is a real art and I thought it was fantastic for the inaugural event. You have a big crowd, an exciting jump-off, and the course was challenging but it allowed for a few clear rounds and great sport in the jump-off, which is great for the fans.

“It’s always nice to win on your home soil in the U.S. and extra special in New York,” continued Ward. “I can remember years ago when I was a young kid, I won a grand prix at [Madison Square] Garden and that was very special because it was the home state and the home city. It was very special again today here.” 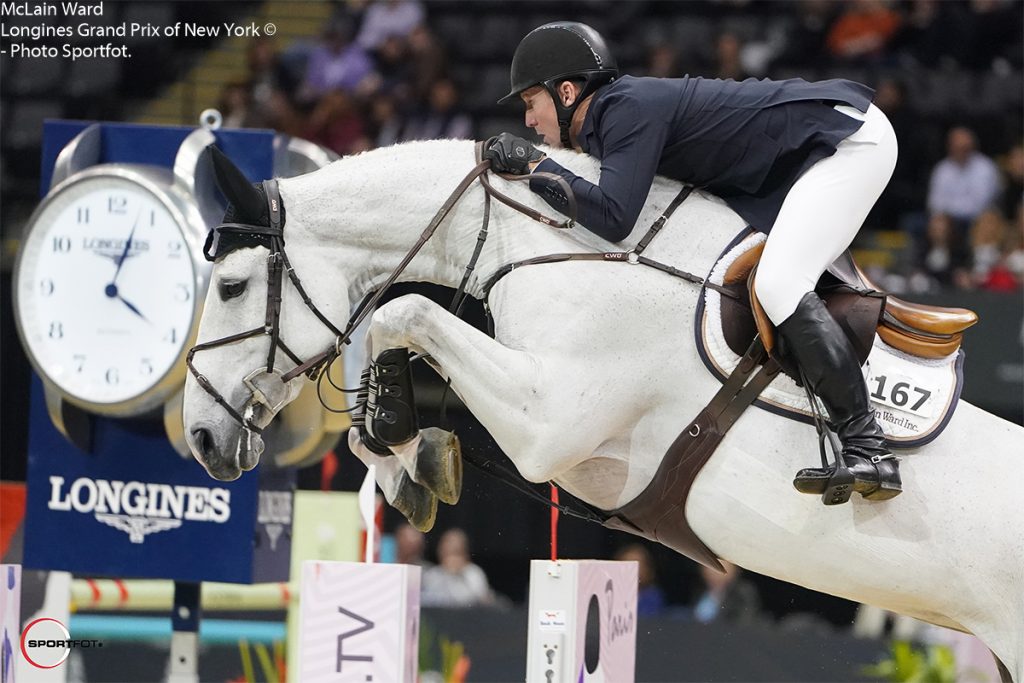 Erynn Ballard (CAN) was poised to become only the second woman to ever win a Masters Grand Prix along with Pénélope Leprévost of France, who earned a Paris title in 2011, when she went clear from the first position in the order. Setting the pace again in the jump-off, Ballard sat in the lead on a time of 35.89 seconds riding Fantast, a 13-year-old Belgian Warmblood gelding by Toulon x Rubens du Ri d’Asse owned by Sagamore Farms.

“New York has always been good to me and I would say this is a career best for me from start to finish,” said Ballard after a banner week that also included a win in the $100,000 Longines Speed Challenge on Friday evening. “I had a big win in the Maclay Finals at Madison Square Garden [in 1998] and everyone was saying New York was my place. I think that’s true for this week. I was hoping for two top 10 finishes and I got three podium finishes. There’s not much more you can do than that.” 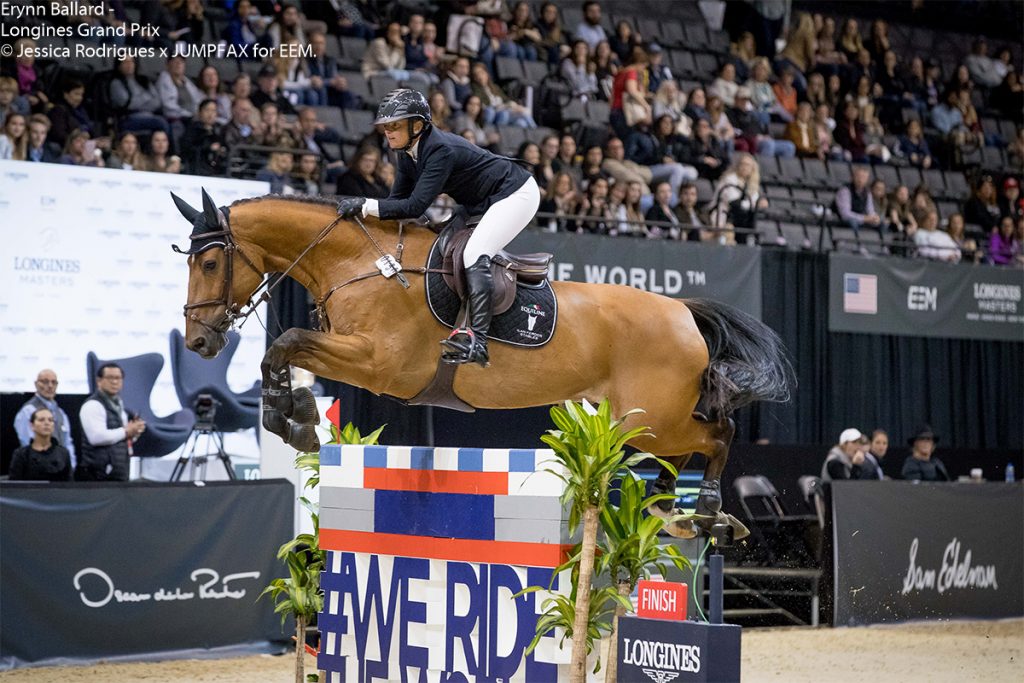 Two-time Olympic silver medalist Peder Fredricson (SWE) was hungry for a win and gave a lesson in speed with Hansson WL, the 10-year-old Swedish Warmblood gelding by Indra WL x Iowa owned by Måsel AB. He stopped the clock at 35.43 seconds to claim second and bump Ballard to third, but was no match for Ward.

“It’s always difficult to beat McLain,” said Fredricson, who is the reigning Longines FEI European Champion. “He is always quick, but I was really happy with my round. My horse jumped fantastic. If I could have done something, maybe I could have turned tighter to the second to last [jump].“As a rider, it’s fantastic to ride here,” continued Fredricson on his time in New York. “You really feel the crowd and also in the prize giving, you get really good contact with the people in the audience. I really enjoyed my time here.” 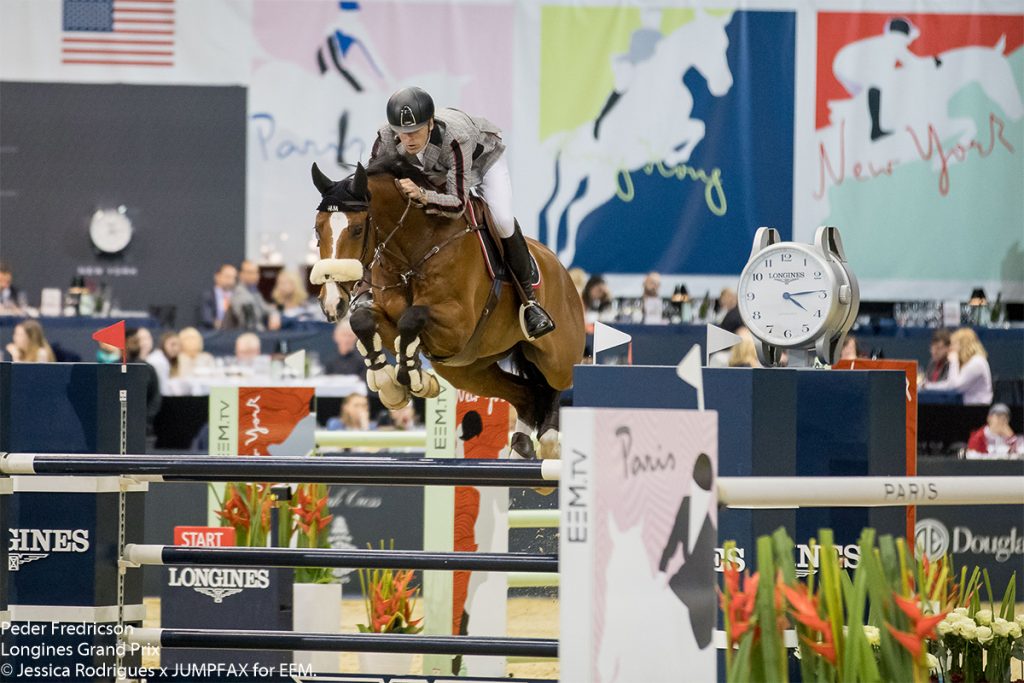 Ward and his winning mount recently joined forces after he added the ride to his already stacked string, which is made up of five grey mares including Clinta along with his World Cup champion HH Azur.

“It’s great to see her showing all that I thought she could be,” said Ward of the mare he owns with Sagamore Farms. “I saw her in Aachen last summer and fell in love with her, but it took me seven months to get her. She made a great effort today and it was my day.”

A New York native, Ward was complimentary of the Longines Masters of New York and the efforts of its management to introduce unparalleled sport and entertainment to the American market, saying, “They’re really making this an entertainment spectacle, which is phenomenal. It’s something that’s been missing in promoting our sport; making it more exciting to a more diverse audience.”

ChristopheAmeeuw, CEO and Founder of EEM, had dreamt of bringing the Longines Masters to New York since he conceived the idea of a high-performance show jumping series.

“On behalf of the entire team at EEM and the Longines Masters Series, we want to thank the riders, our partners, our exhibitors, and most importantly, our fans, for making Season III asuccessful and historic event,” said Ameeuw. “The past four days have exhibited the world’s top athletes and showcased some of the best performances in show jumping history. Bringing the Longines Masters Series to New York has always been a dream and we’re thrilled to have received such a warm welcome. We look forward to continuing this legacy for years to come.”

In a thrilling finale to the Masters Two division at the inaugural Longines Masters of New York, 17-year-old Madison Goetzmann (USA) displayed talent well beyond her years to win the $35,000 Sam Edelman Grand Prix following a seven-horse jump-off.  Riding Prestigious, her 11-year-old Westphalian gelding, Goetzmann of Skaneateles, NY, took every risk in the jump-off before galloping through the timers in 35.55 seconds.  With 1984 World Cup champion Mario Deslauriers (CAN) last to go in the jump-off, the crowd was on the edge of its seat as the two-time Canadian Olympian gave it his best effort aboard Bardolina 2, a nine-year-old Holsteiner mare owned by Wishing Well Farm.  It was close, but not close enough, as the pair stopped the clock in 35.70 seconds to finish runner-up.  Megan McDermott (USA) rounded out the top three after incurring four faults in the jump-off in a time of 35.42 seconds.

“It’s amazing!” said Goetzmann of her Longines Masters debut.  “I wasn’t really sure what to expect but it’s managed so perfectly, it’s a beautiful atmosphere, and the crowds are amazing.  I’m really sad that it’s over!”

With top results throughout the Masters Two division, including a win in Saturday’s Mark Cross Trophy riding Curo, Deslauriers, who resides in New York City, was crowned the Stephex Leading Rider.  His reward was a one-year lease on a Stephex STX 2 horse van.

The Masters Three Devialet Grand Prix 1.15m kicked off the final day of show jumping competition at the Longines Masters of New York with a nail-biting finish for Serena Marron (USA) riding Donar J. Clear rounds were elusive in the opening round until the final two riders, Alexandra Cherubini (USA) riding her 16-year-old Oldenburg gelding, Lando, and Marron aboard her 15-year-old Belgian Warmblood gelding both jumped clear to ensure a two-horse jump-off.

First to go in the tie-breaker, Cherubini was going for broke when she ran into trouble at the double combination, forcing her to circle and costing her a total of 13 faults.  With some breathing room, Marron was able to incur four faults yet still take the win.  Joining Marron and Cherubini on the third step of the podium was fellow American Gabrielle Freund riding No Sunday Sales. 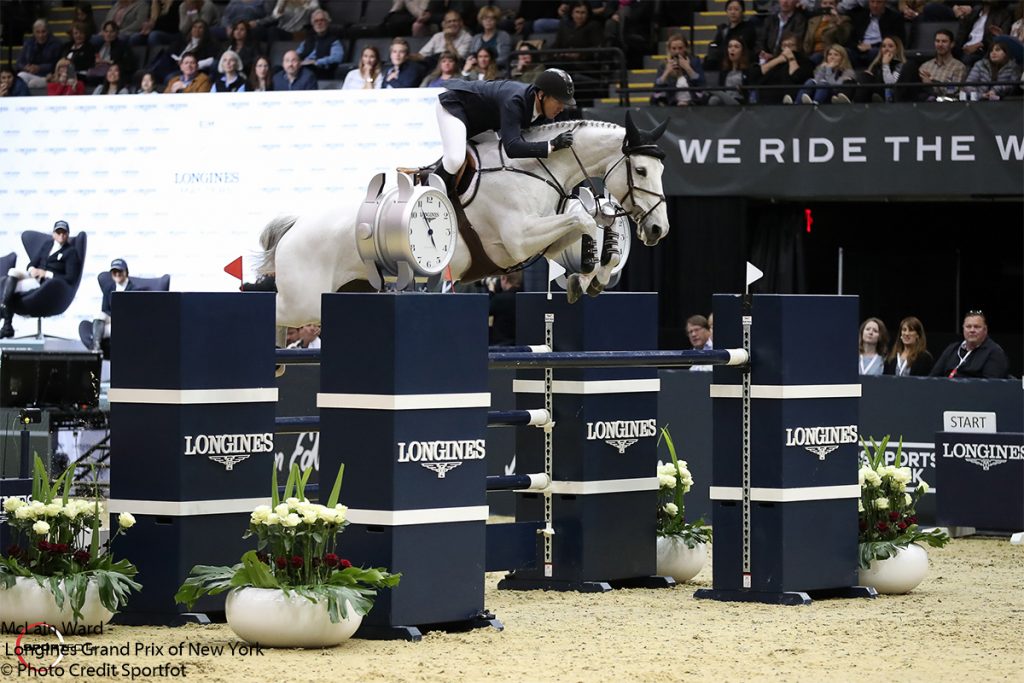