The best car in the world at the BMW ( Welt) World.

“Strive for perfection in everything you do. Take the best that exists and make it better. When it does not exist, design it.”

Sir Henry Royce and Charles Rolls, the founders of Rolls-Royce, settled for nothing but perfection. The above quotation from Henry Royce still guides the brand to this day. And the Rolls-Royce Motor Cars exhibition – which you can now admire at BMW Welt – is adorned with the first sentence of this guiding principle in large silver letters.

The large open-plan space is home to the first permanent Rolls-Royce exhibition outside the UK. It brings together the brand’s unique history, which spans more than a century, and modern-day developments. Two models from the latest Rolls-Royce series are being showcased, one at the entrance of the showroom and one on the rotating podium in the centre of the exhibition space. 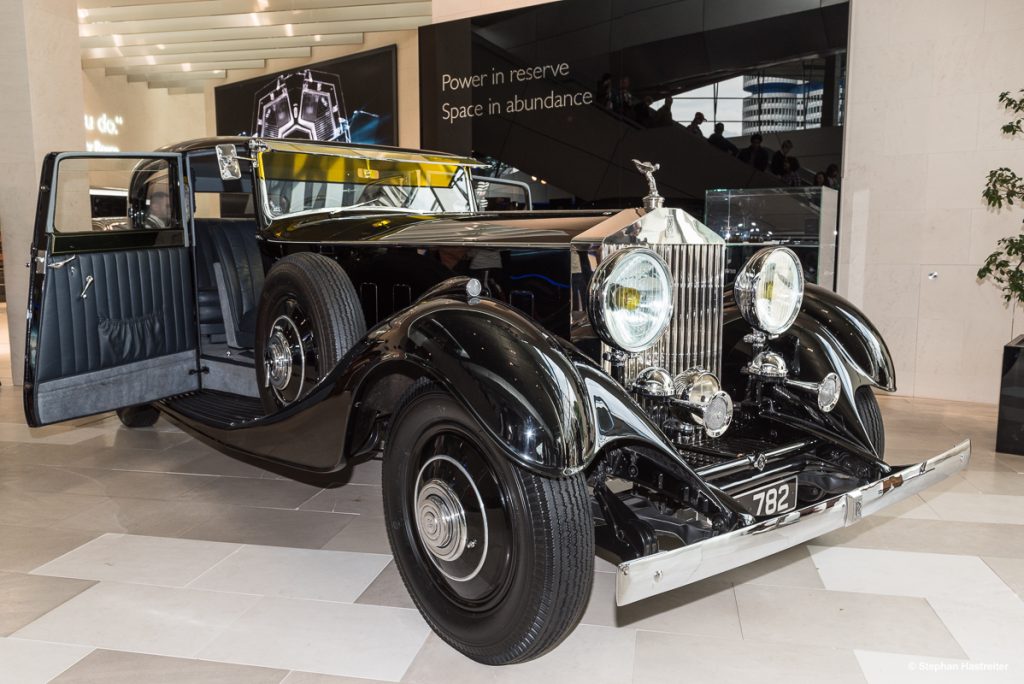 Lately the BMW Welt has recived the visit of two Very Distinguished Gentlemen: The Magnificent New Rolls-Royce Phantom VIII and The Rolls Royce Phantom II Continental: Togehter these two Great Cars have caught the eye and enjoyed the admiration of thousands of visitor at The BMW Welt in Munich, Germany.

With its perfect lines, Absolutely Elegant Design, Fine Interiors, New Gallery, Perfect Engineering and the Best Technology, The New Rolls-Royce Phantom has seduced the Public in the BMW Welt and throughout the whole World. 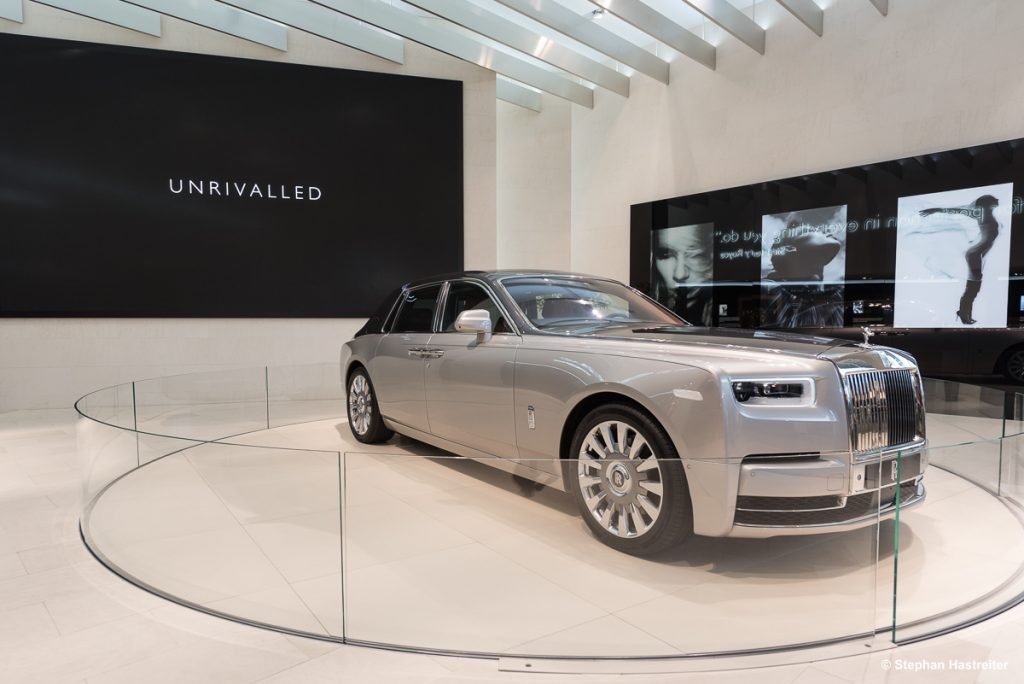 Rolls-Royce Phantom VIII  The Pefect Car Ever Made.

A Journey through Time.

In 1904, the very-first Rolls-Royce cars were unveiled at the Paris Motor Show. Even the first-ever model – which came to be known as the Silver Ghost – was regarded as the best car in the world, permanently elevating the company to the elite ranks of luxury car manufacturers. Over the decades, it has produced countless opulent vehicles for kings, VIPs and those in power – many of which were built by the finest carmakers and thus constitute valuable one-offs. At the end of the last century, the BMW Group acquired Rolls-Royce Motor Cars, and since then, two new series – “Ghost” and “Phantom” – have been developed on British soil at Goodwood. These continue the long tradition of producing “the best cars in the world” in a way that’s fit for the present day.

Occupying a special place, both on the vehicles themselves and in the exhibition, is the Spirit of Ecstasy. The 100th anniversary of the legendary figure, which graces the bonnet of every single Rolls-Royce ever made, served as the occasion for renowned British celebrity photographer Rankin to produce an enthralling 100-piece photo series. The images constitute artistic and often highly personal interpretations of the brand’s iconic emblem. Three of these large photos are now on show at BMW Welt. 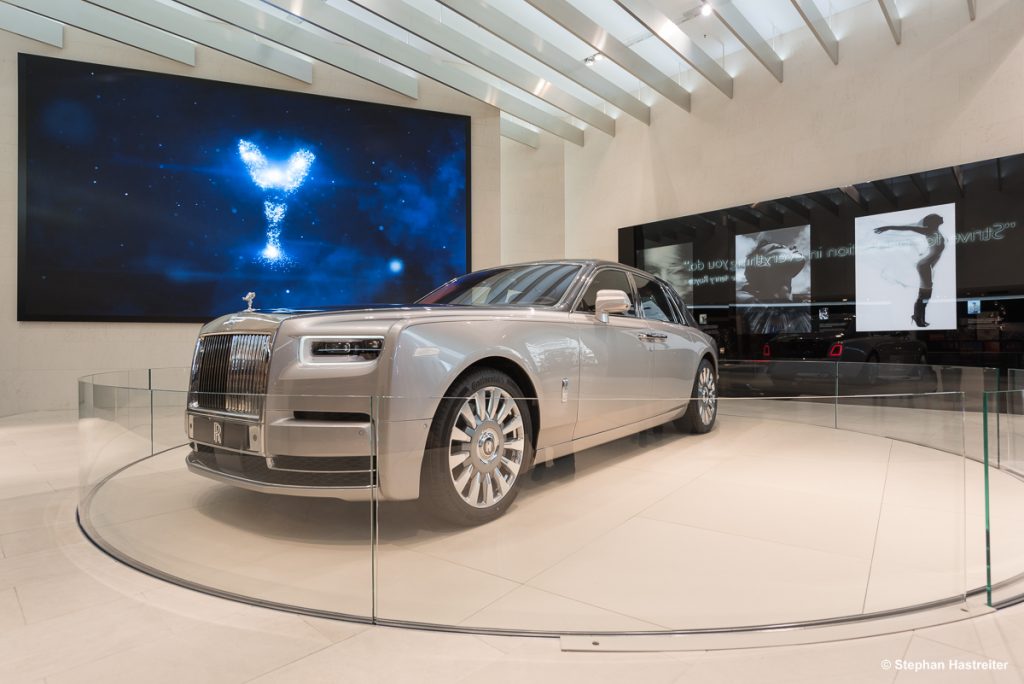 Also on show is the process by which each Rolls-Royce is handcrafted to produce a unique vehicle, with every single car passing through sixty pairs of hands during manufacturing – hands belonging to designers, technicians and other highly qualified specialists. BMW Welt has devoted a roughly five-metre-long black table to this craftsmanship. Here, you’ll find samples of the elegant woods, leathers and carpet materials employed inside the vehicles, learn more about the art of creating a Rolls-Royce and play the part of a master carpenter to gain an interactive insight into how the cars are crafted. 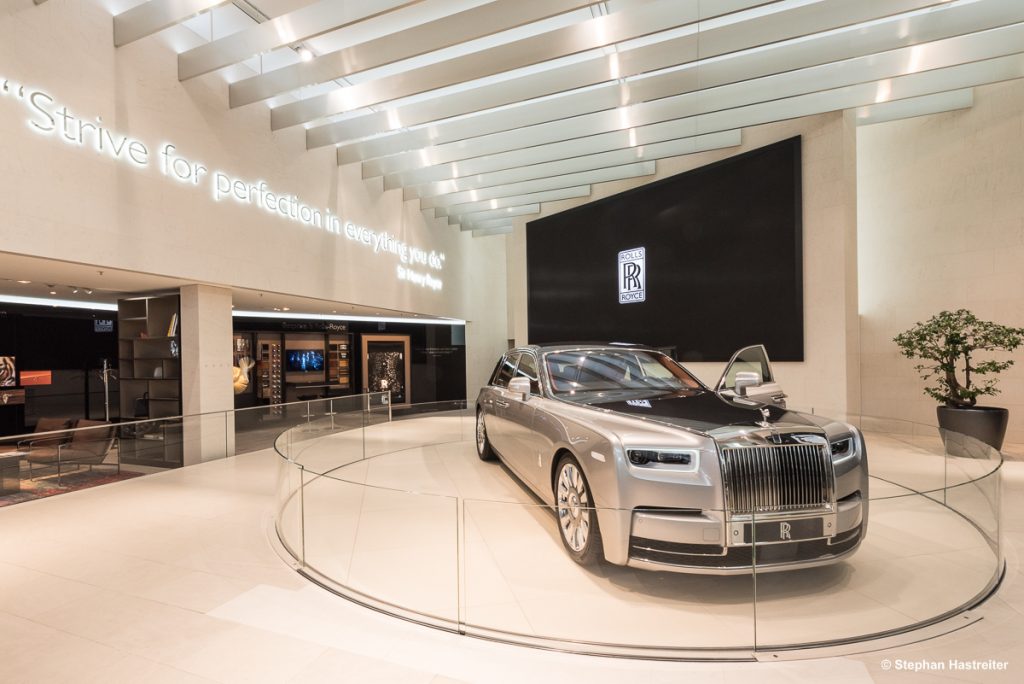 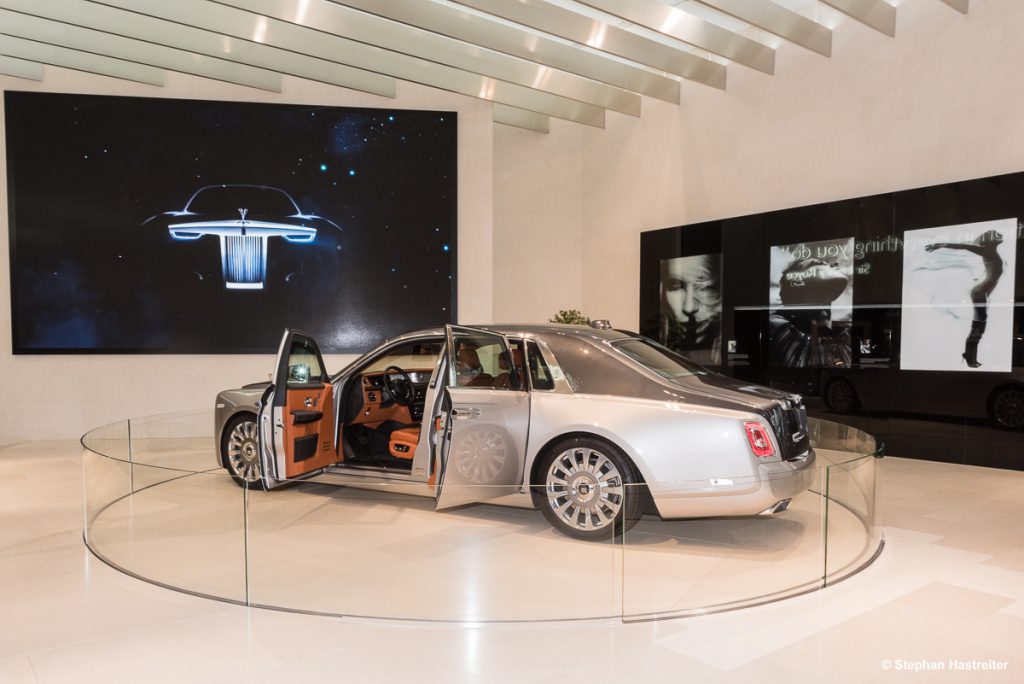 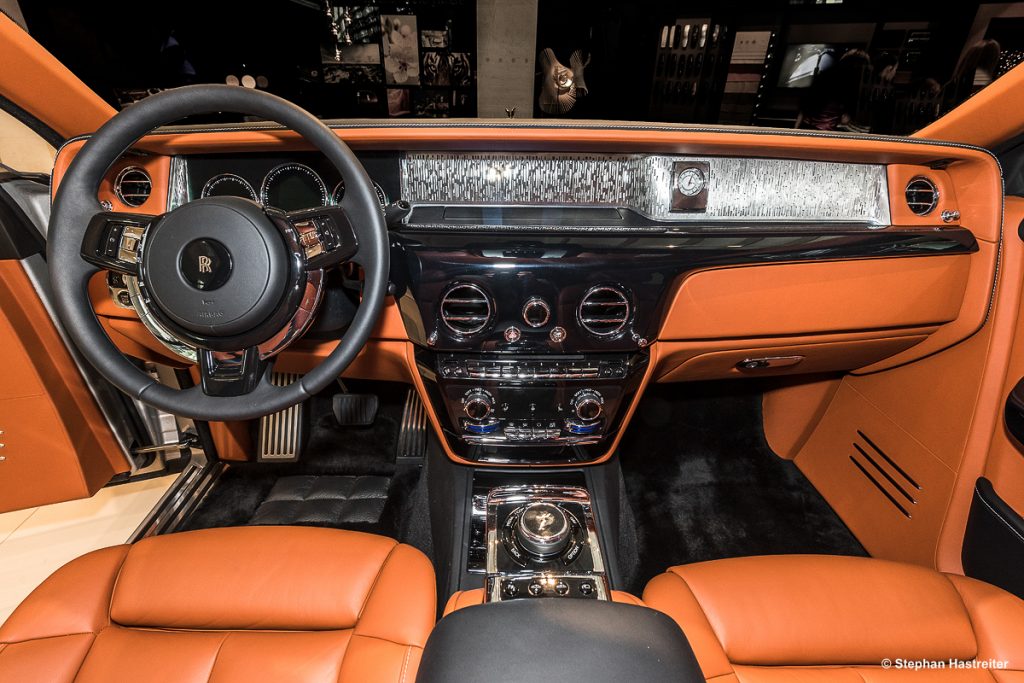 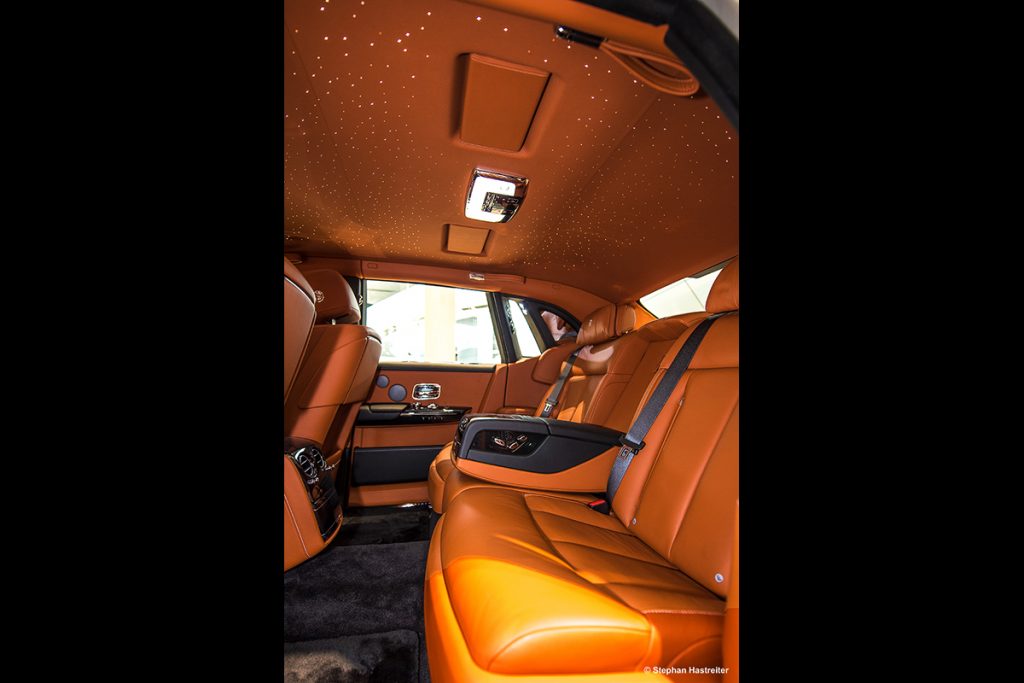 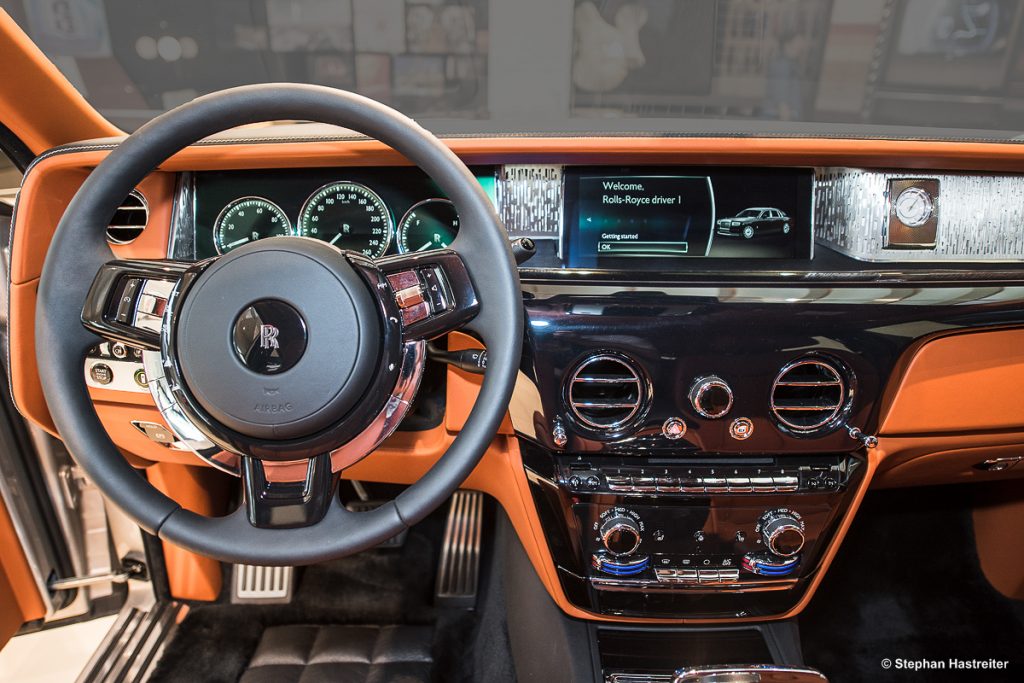 In the adjoining customer lounge, you can take a short break and enjoy the perfect view of the Rolls-Royce in the middle of the exhibition. Playing on the walls is a film about Goodwood, home and production site of all Rolls-Royce vehicles. You can also discover the entire product range or delve into the company’s long history.