The Porsche Museum showcases the success story of the sports car.

Porsche’s anniversary year is about to reach its high point: Today, Friday (June 8th) the Porsche Museum  holds  the opening ceremony for the “70 years of the Porsche sports car” special exhibition together with invited guests. Attending the ceremony will be the Minister President of the state of Baden-Württemberg, Winfried Kretschmann, the Lord Mayor of Stuttgart, Fritz Kuhn, Parliamentary State Secretary at the Federal Ministry of Transport and Digital Infrastructure, Steffen Bilger, as well as numerous representatives from the fields of politics, business and community. Dr Wolfgang Porsche, Chairman of the Supervisory Board of Porsche AG, Oliver Blume, Chairman of the Executive Board of Porsche AG and Uwe Hück, Deputy Chairman of the Supervisory Board of Porsche AG, will look back together on the birth of the Porsche brand. On this very day–June 8–in 1948, the Porsche 356 “No. 1” Roadster received its general operating permit. Since then, the company had produced much more than just sports cars: Porsche is a synoym for a sporty driving experience and way of thinking; for automotive innovation, design and functionality.

With this special exhibition, Porsche presents numerous stories and milestones through which the company has decisively shaped and driven the development of sports cars from 1948 to this day. Its aim is to highlight outstanding Porsche developments over the past seven decades. More than 75 exhibits–from the legendary Porsche 356 “No. 1” Roadster from 1948 to the purely electric Porsche Mission E–provide insights into the past and future of the brand. 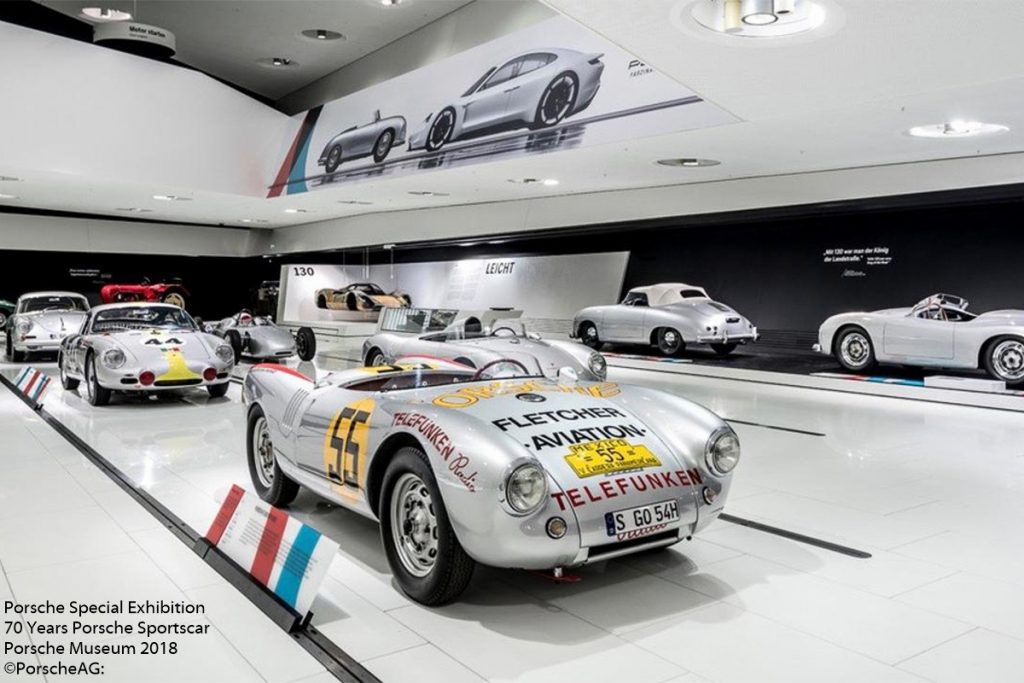 The 356 “No. 1” Roadster will be the first thing that visitors see at the exhibition

“With this exhibition celebrating the anniversary of our brand, we are breaking completely new ground”, Achim Stejskal, Director of the Porsche Museum, points out.

“For the first time, we have completely re-designed our entire exhibition area, which covers more than 5,600 square metres”.

As the “origin of the sports car”, the 70-year-old 356 “No. 1” Roadster will be the first thing that visitors see at the exhibition. This unique model makes Porsche one of the few automobile manufacturers in the world to have the original first vehicle ever built by the brand in its possession. 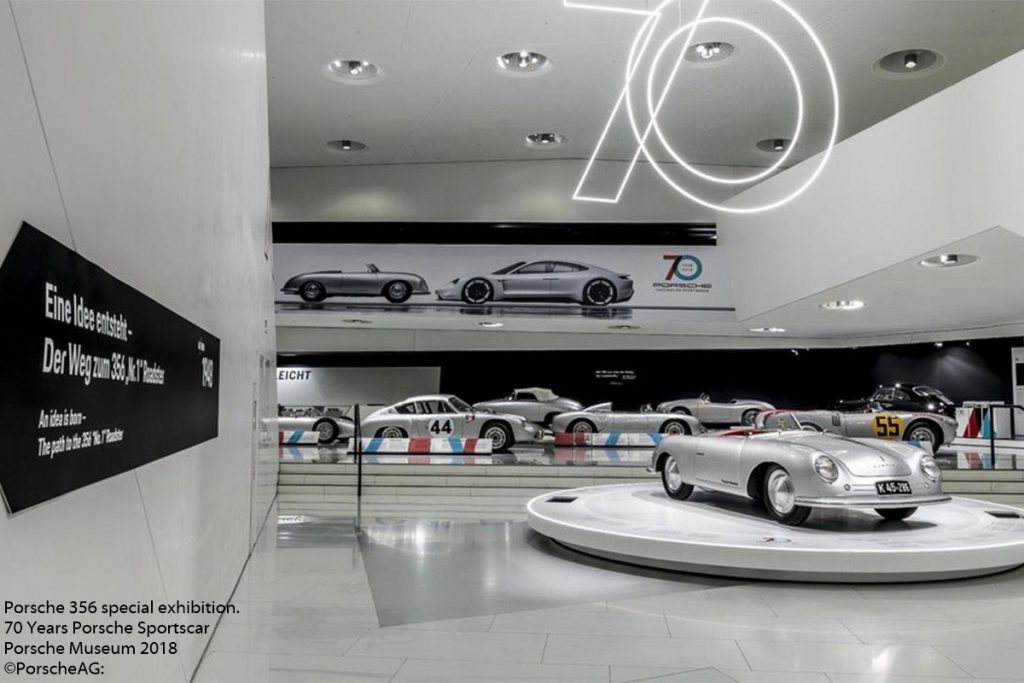 Motor sports makes up a significant part of each decade. Throughout its history to the present day, Porsche has developed and tested new technologies in racing cars that go on to become legends. This principle is also shaping “the future of the sports car”, with the Mission E, the series version of which will be launched on the market in 2019 as the first purely electrically powered Porsche, drawing on the experiences gained from the Le Mans-winning 919 Hybrid. Digital projects, such as networking via Porsche Connect and data security using blockchain in sports cars, will also feature. The special exhibition will be accompanied by interactive experiences, such as an augmented reality application for the Mission E. As visitors view the concept study, AR glasses display further information about the technology behind the Mission E.

The special exhibition’s unique appeal is created by combining Porsche through the eras with the company’s cultural values: Pioneering spirit, passion, sportiness and family. The exhibition also places particular emphasis on the employees, racing drivers and friends of Porsche that have made the company the force it is today. Without the legendary passion of Porsche’s employees and the enthusiasm of the Porsche community across the world, such a success story would be unthinkable for the sports car manufacturer. 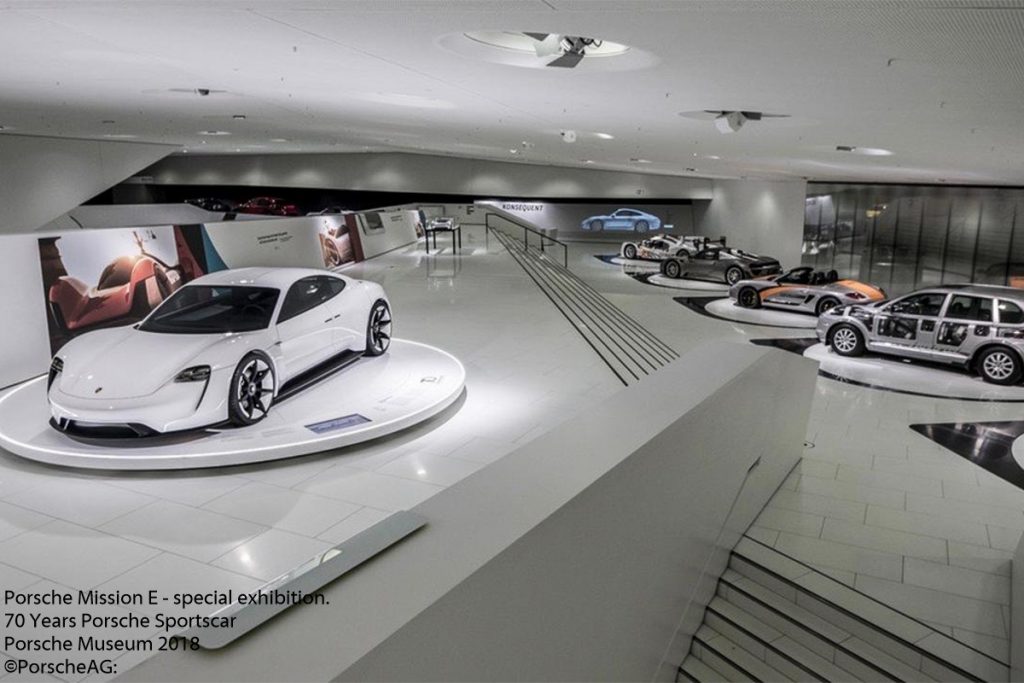 Numerous activities around the world

The sports car manufacturer will also hold a special exhibition to mark the anniversary year in the Porsche pavilion at the Autostadt visitor attraction in Wolfsburg. The first four 356 Speedster vehicles ever built, dating from 1954, will be showcased as examples of Porsche engineering. Another special exhibition will also be held for the family day taking place tomorrow at the Porsche plant in Leipzig.

The sports car manufacturer is celebrating this anniversary with numerous activities around the world throughout 2018: Tomorrow (June 9th), Porsche is inviting fans to its “Sports Car Together Day” at all of its sites around the world. On Sunday (June 10th), Porsche will host a grand celebration at the Cannstatter Wasen festival grounds. Over the weekend from June 16–17, Porsche will welcome its staff, Zuffenhausen residents and fans of the brand for a public celebration in and around the plant based around Porscheplatz in Zuffenhausen. The festival will include interactive activities for visitors both young and old, short plant tours, bands, food trucks, live coverage of the 24 Hours of Le Mans and the broadcast of the World Cup game between Germany and Mexico. Admission to the museum and all events are free of charge over the weekend.

The “Festival of Speed”, held from July 12–15 at the Goodwood race track in the UK, and the “Rennsport Reunion” in California from September 27–30, will also mark the anniversary. The anniversary celebrations will conclude with the “Sound Night” event to be held for the first time in the Porsche Arena in Stuttgart on October 13. 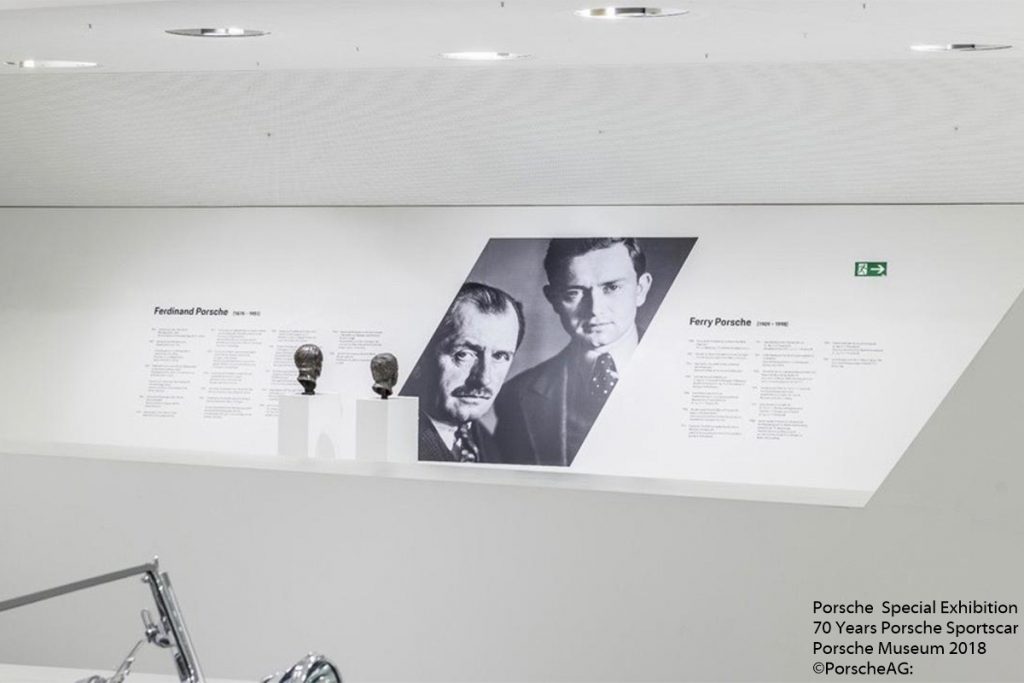 The “70 years of the Porsche sports car” special exhibition is being held until January 6, 2019. The Porsche Museum is open from Tuesday to Sunday, from 9 am to 6 pm. Further information is available here