Munich. 35 years ago, BMW Motorsport GmbH created a new vehicle category. The first high-performance sedan combined the driving dynamics of a sports car with the comfort and functionality of a top-of-the-range 4 – door vehicle. Given the name of BMW M5 and powered by an in-line 6-cylinder engine from the mid-engine sports car BMW M1,the new model started an impressive career in which it is currently the BMW M5Competition (combined fuel consumption: 10.6 – 10.5 l/100 km; combined CO2 emissions: 241 – 238 g/km) that sets the pace. Today the BMW M5 is the world’s most successful high-performance sports sedan, continuing to draw its fascination from the racing expertise of the company that is known today as BMW M GmbH. To mark this anniversary, BMW MGmbHpresents a special edition of the BMW M5 which has the most powerful engine in the model’s history under the bonnet – with an output of 460 kW/625 hp – along with a range of thrilling design and equipment features. The BMW M5 Edition 35 Years will be produced in a limited seriesof 350 units and will be available worldwide from July 2019. 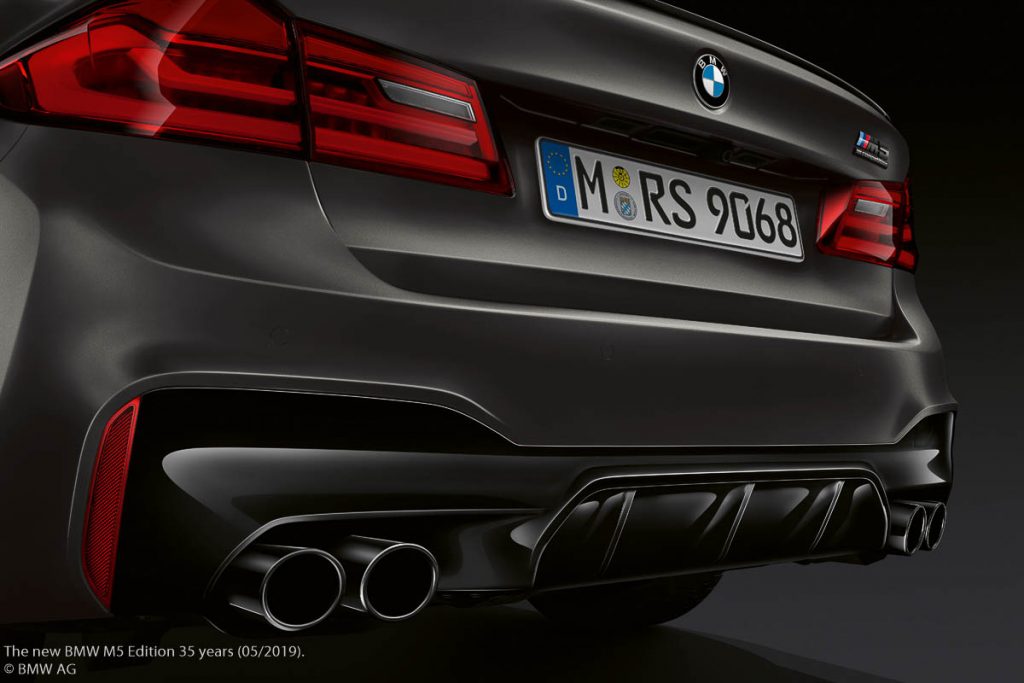 Over six generations, the driving dynamics potential of the BMW M5 has continuously increased, but the high-performance sedan has constantly remained faithful to its character. As an independent model based on the BMW 5 Series, it offers that crucial extra in terms of performance that authentically expresses a passion for racing. The high-revving concept of the engine, the distinctive suspension technology harmonised perfectly with the high level of engine power and the M specific design features to optimise cooling air intake and aerodynamic properties guarantee driving properties that are defined by maximum dynamic performance, agility and precision – as is typical of the BMW M5.

The resulting M feeling and the exclusive character of the high-performance sports sedan come to life with particular intensity in the BMWM5 Edition 35 Years. The point of departure for the configuration of the Edition model is provided by the BMW M5Competition, in which racing-inspired performance reaches a whole new dimension in a sedan. This is due to the V8 engine with M TwinPower Turbo Technology, a maximum output of 460 kW/625 hp and a maximum torque of 750 Nm along with the particularly direct engine connection, the distinctively configured suspension technology, the all-wheel drive system M xDrive and the ActiveM Differentialin the rear axle transmission. The driving experience offered by the BMW M5 Competition is defined by powerful thrust, optimum traction, outstanding ride stability and handling that can be controlled precisely at all times. It completes the sprint from standing to 100 km/h in 3.3 seconds, passing the 200-km/h mark after 10.8 seconds. 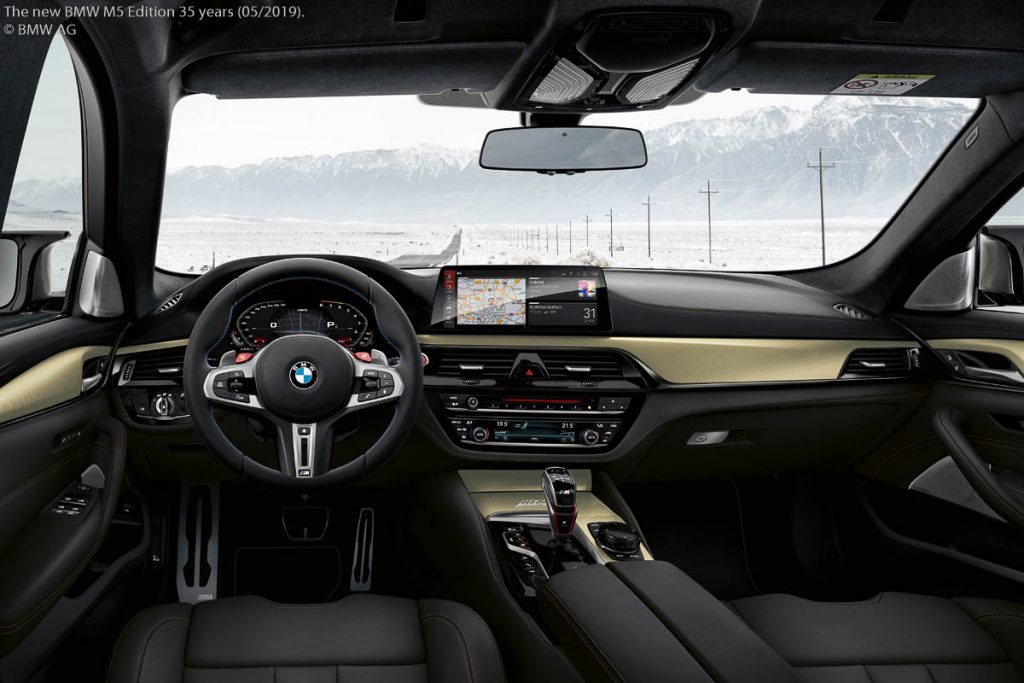 The exterior and interior of the BMW M5 Edition 35 Yearsare as impressive as its driving performance figures. Particularly high-quality Mdesign featuresdeveloped especially for the Edition model and BMW Individual fittings give the vehicle the status of an exclusive collector’s item. Its striking appearance is particularly ensured by the BMW Individual special finish in Frozen Dark Grey II metallic which has a special pigmentation to create a silk matt surface impression Newly designed 20 -inch M light alloy wheels in Y spokedesign and the colour Graphite Greywere created exclusively for the Edition model. In addition, the calipers of the standard M compound brake system are finished in high-gloss black. The M carbon ceramic brake system is optionally available with brake calipers finished in gold. 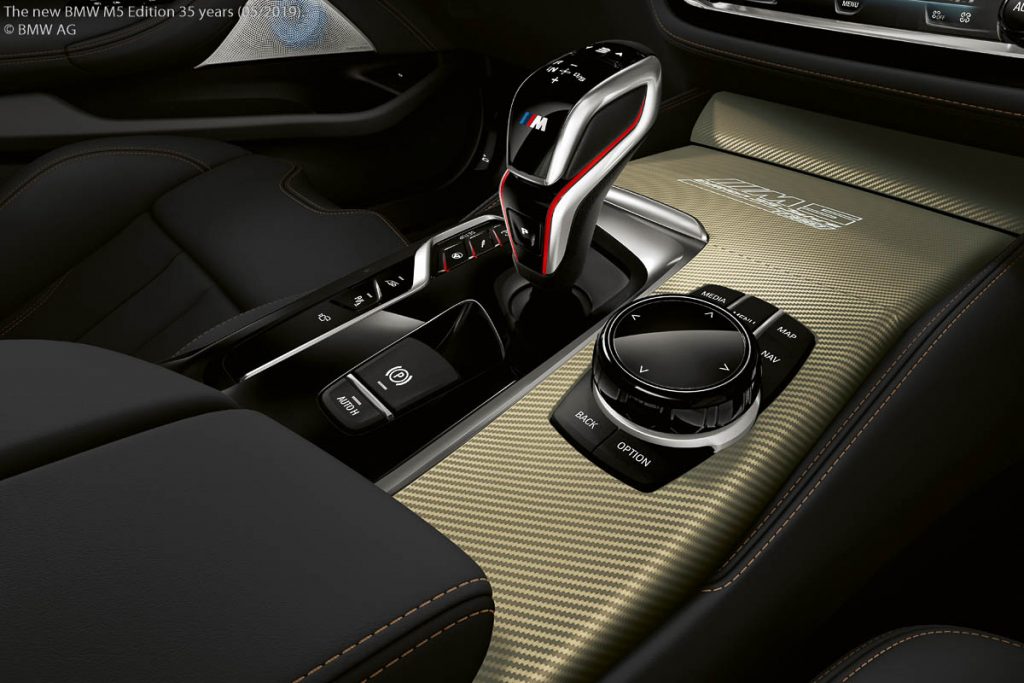 In addition to M multifunction seats and the BMW Individual Merino full leather trim in black with beige contrast seams, particularly exclusive interior flair is created by the trim finishers in aluminium carbon structure gold anodized – which is presented here for the first time. These finely structured, exclusively shimmering surfaces are to be found in the area of the instrument panel, the door trim sections and the centre console. Door sill finishers bearing the inscription “M5 Edition 35 Jahre”and a lasing engraving with the inscription “M5 Edition 35 Jahre 1/350” on the cupholder cover in the centre console are further distinguishing marks of the Edition vehicles. 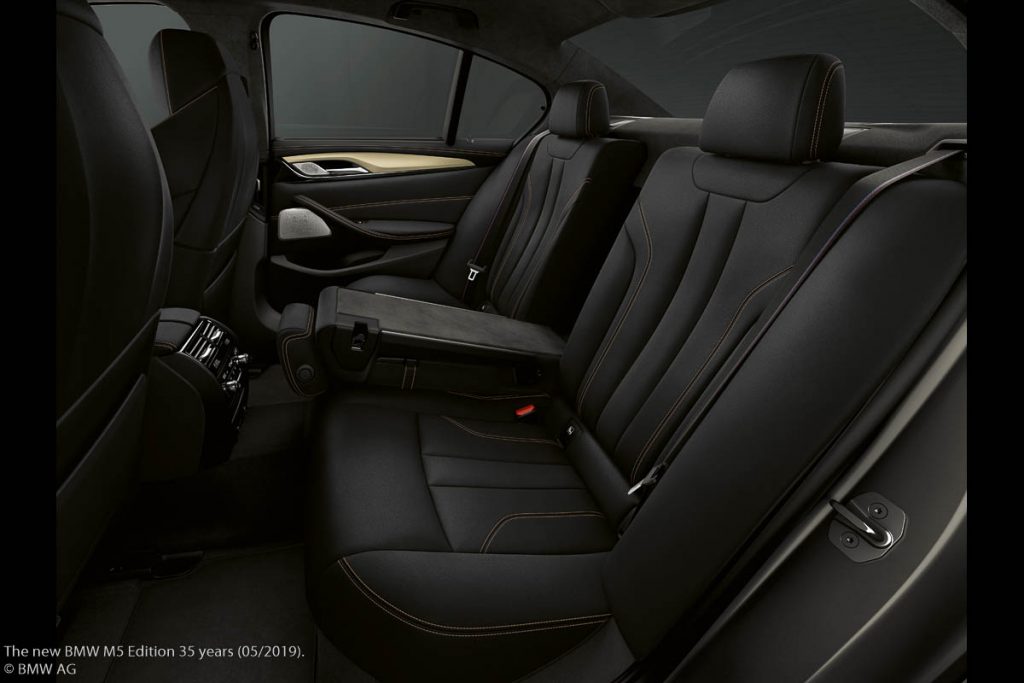 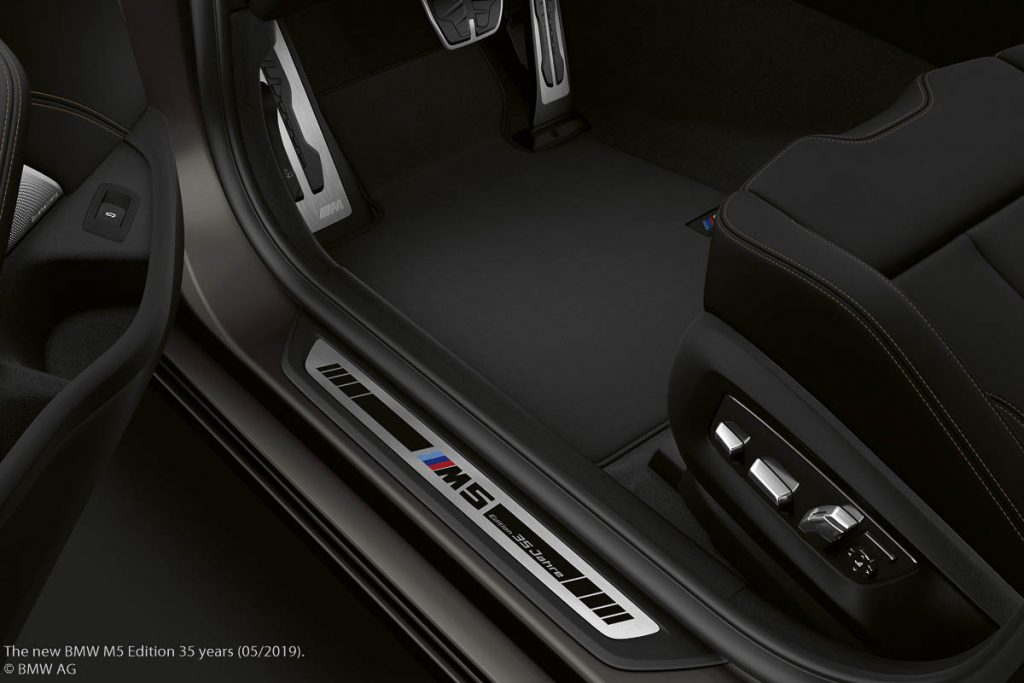 With its technology and design, the BMW M5 Edition 35 Years provides a particularly authentic embodiment of the philosophy on which the concept of the high-performance sedan is based. The engine, power transmission, suspension and design of the BMW M5 have always formed a carefully harmonised package. Constant engine power delivery across a wide engine speed range is just as much a hallmark feature as the car’s agile and safe handling properties on the road, its thrilling driving dynamics on the race track and its stylishly understated appearance. 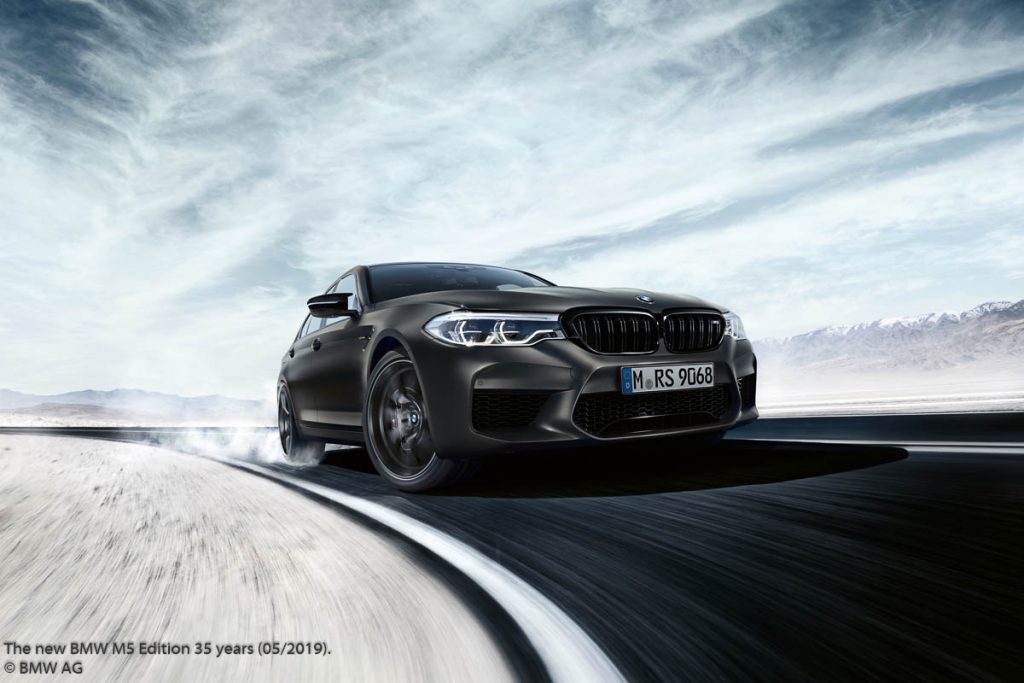 Even the first generation ofthe BMW M5 was remarkably inconspicuous, with an appearance that seemed virtually identical to the basic model. This made its engine properties all the more spectacular. The in-line 6-cylinder engine, taken from the BMW M1 and slightly modified, delivered 210 kW/286 hp – 9 hp more than in the legendary mid-engine sports car due to optimised digital engine electronics. “The suspension must always be faster than the engine”– this was the guiding principle for BMW M automobiles at the time, which was why the BMW M5 was given a tightened sports suspension and a high-performance brake system in addition to a reinforced five-speed transmission and a differential lock in the rear axle transmission with a 25 percent locking effect.

The second generation of the BMW M5 also featured a stylish look: it initially went on the road with an output of 232 kW/315 hp and from 1992 onwards with 250 kW/340 hp. It now included such features as a standard self-levelling suspension on the rear axle to ensure the characteristic balance between race track performance and supreme everyday comfort. In the third generation of the BMW M5 launched in 1998, the two now typical twin rear exhaust pipes first provided a discreet indication of the model’s outstanding engine performance. In addition, the V8 engine with 294 kW/400 hp now required considerably enlarged cooling air inlets at the front. The fourth edition of the BMW M5 featured an impressive engine that was even more spectacular than before: a 10-cylinder power unit derived from Formula 1developed a maximum output of 373 kW/507 hp. In addition, the V10 took the high-revving concept of the M engines to a new extreme – with more than 8 000 rpm and a highly impressive sound. 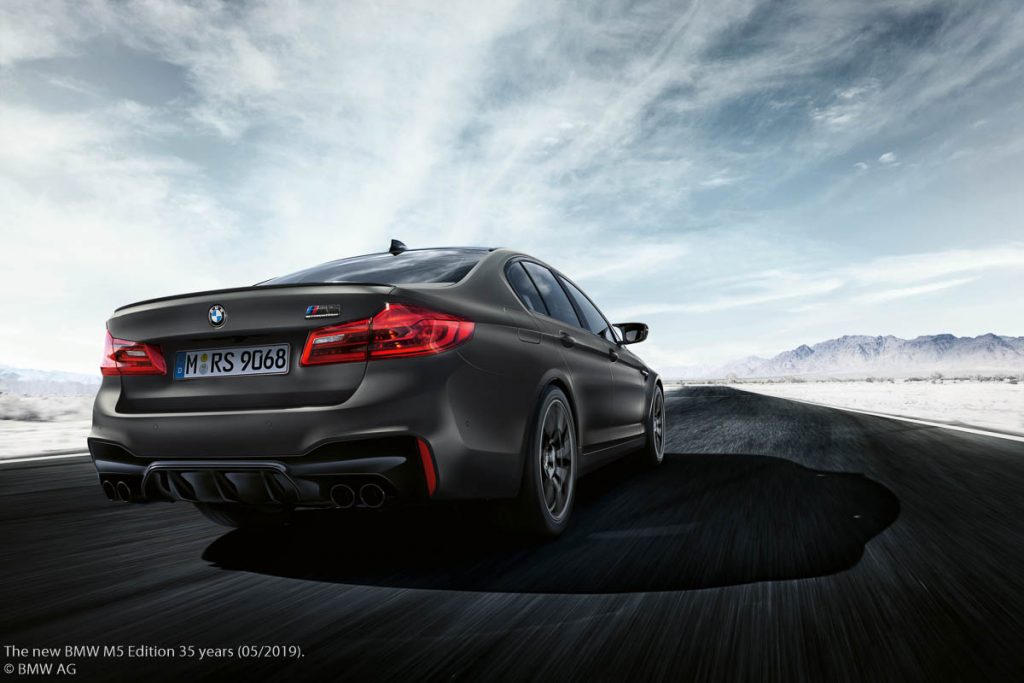 With the return to the V8 engine in the fifth generation of the BMW M5,2011 also saw the introduction of turbo technology. Two turbochargers arranged in the V space between the cylinder benches and a cross-cylinder-bench exhaust manifold were the highlights of the high-revving engine with an output of 412 kW/560 hp, whose power was tamed among other things by 7-speed dual-clutch transmission and an Active Differential Lock at the rear axle. The sixth and latest chapter of the BMW M5success story is once again defined by a V8 engine. With the new power unit, output is increased to 441 kW/600 hp – in the BMW M5 Competition to as high as 460 kW/625 hp. For the first time, the intelligent all-wheel drive system M xDrive contributes to ensuring that engine power goes onto the road with maximum supremacy. It introduces a whole new level of driving dynamics and ensures that the latest and most powerful BMW M5 is easy for the driver to control – even when driven in sporty style and at high output levels.