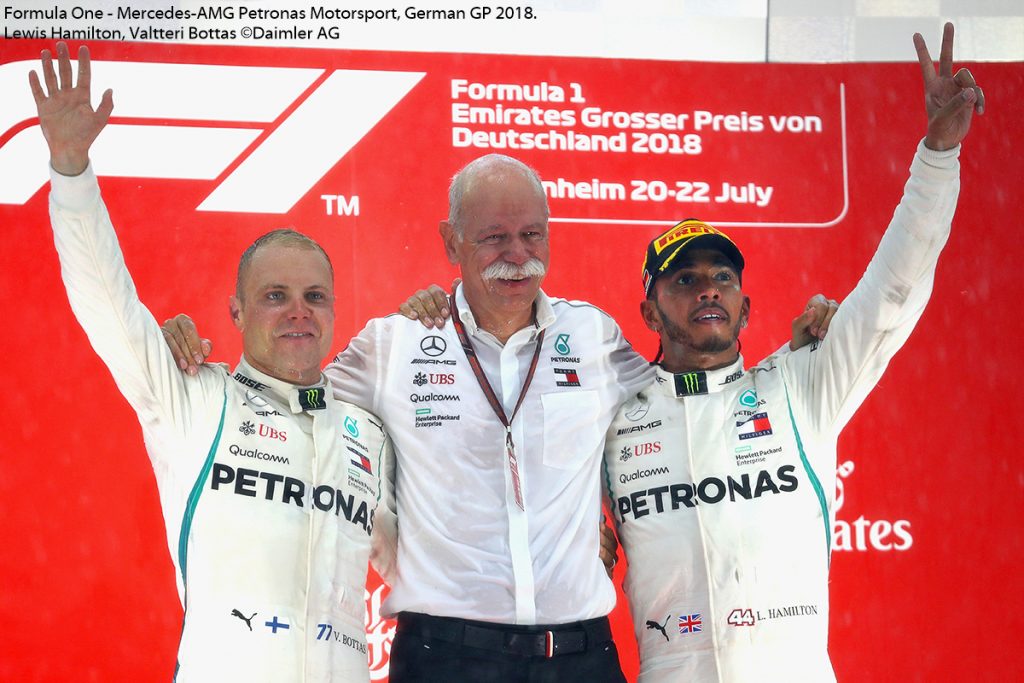 I’ve never experienced a race quite like this. I knew sitting on the grid that I had to catch the guys at the front – that was my goal. I did a very long first stint, but I had to stop just before it started to rain as the tyre just couldn’t hold out any longer. It rained more and more and it was so tricky out there, but I’d come so far, there was no way I was giving it up. To get the 1-2 for Mercedes, especially on a weekend when the Team showed their confidence in us by re-signing us, is tremendous. I would never have thought you could do something like that today but I just kept pushing, I kept believing and it happened. I prayed as I always do before the race, and it feels like those prayers were answered. There was a lot of negativity this weekend, but I feel like the rain has come down and washed away all of that negativity. It’s been a real dream and a day I’ll always remember. 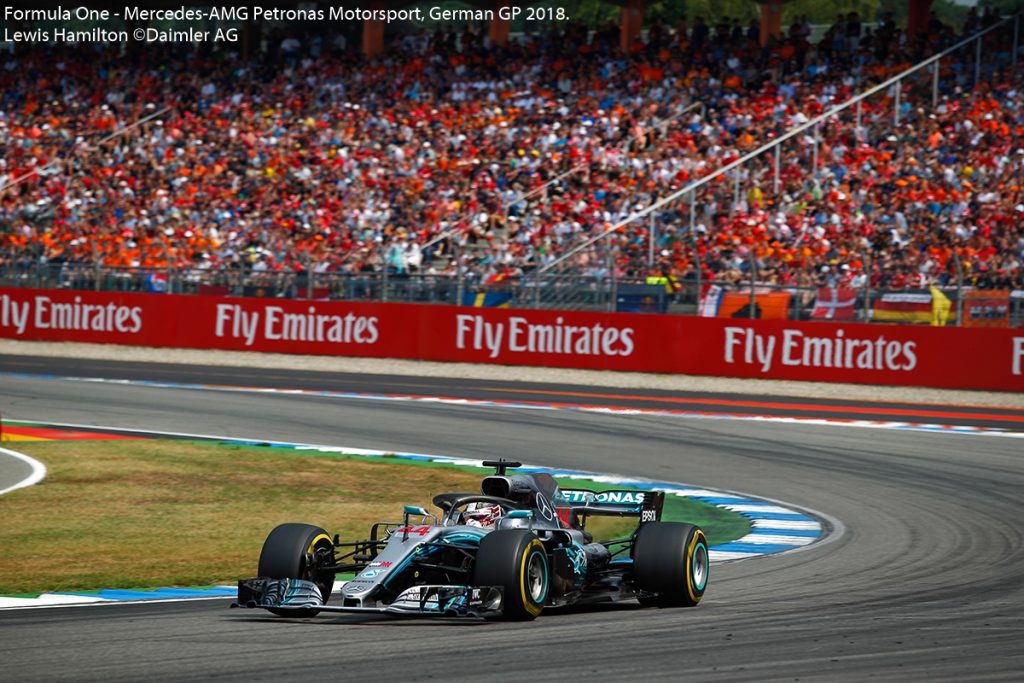 I would have loved to win this race, but at the moment I’m very happy for us at the team – it’s a perfect result here at the home race for Mercedes in Germany. I was fighting for the win today and things started to unfold quite nicely for me towards the end of the race. But unfortunately I was a bit unlucky as the Safety Car did not come at an ideal time for me in terms of tyre age. That’s where I lost the race. Lewis had a great comeback and drove a mega race – probably one of his best. In the end he was a bit more lucky with the Safety Car timing than I was. I had a good opportunity at the re-start, Lewis and I had a great, fair battle – but he managed to stay ahead. It must have been quite exciting to watch – two of the same cars fighting it out on the track. We decided not to pit for the Intermediate tyres; it was risky, but the team was comfortable that the rain would not last long. It turned out to be exactly the right decision, so I’m glad I trusted the team. I will keep pushing hard and I’m sure my time will come. 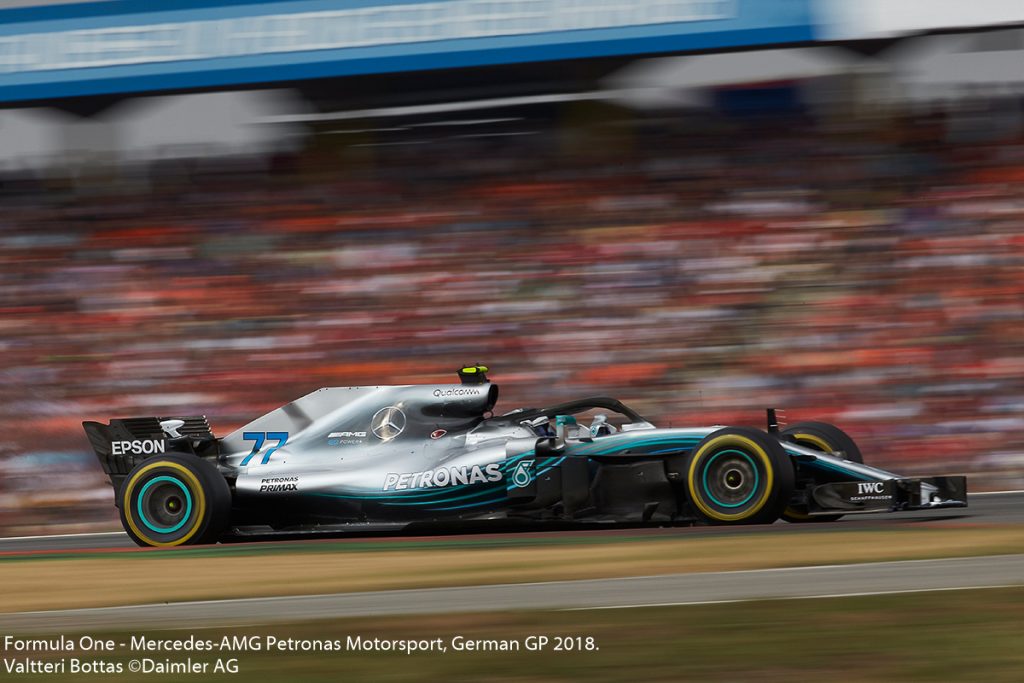 What an incredible race – here at Hockenheim, on home turf for Mercedes, and a one-two finish after all the bad luck we have had in recent races. Today it felt like that turned into good fortune for us and it was the perfect scene on the podium with our two drivers and Dr Zetsche up there. Like always, the race happens on Sunday not Saturday, and sometimes it’s not the quickest car that wins; that was what happened today. But even in the joy of victory, our thoughts also remain with Sergio Marchionne and his family; although we are rivals on the track, we are friends off it and we were saddened to hear the news of his illness. It’s hard to sum up a Grand Prix like this one in a few sentences but things were unfolding in an interesting way when the rain came. Valtteri was planning to make the one-stop plan work, and looked like he was in better shape with his tyres than the Ferraris ahead. Likewise, Lewis had great pace running long on the soft tyre, then was poised to hunt down the guys in front in the second part of the race. Things were pretty chaotic when the Safety Car came out – it was a very late call, a lot of traffic on the radio and we ended up with one car in the pits and one car out on track. In the end, this covered every option for us – then the battle was on when they went back to racing. With so much at stake, and after the misfortune of recent weeks, we took the call to tell Valtteri to hold position; it would have been the same if the cars had been the other way round, too, because we needed to protect the one-two and avoid losing one or both cars. After the drama of Silverstone and then qualifying yesterday, this is a dream result and that unpredictability is the beauty of sport. But our focus will turn quickly to Hungary, where we will have to do it all over again next weekend. 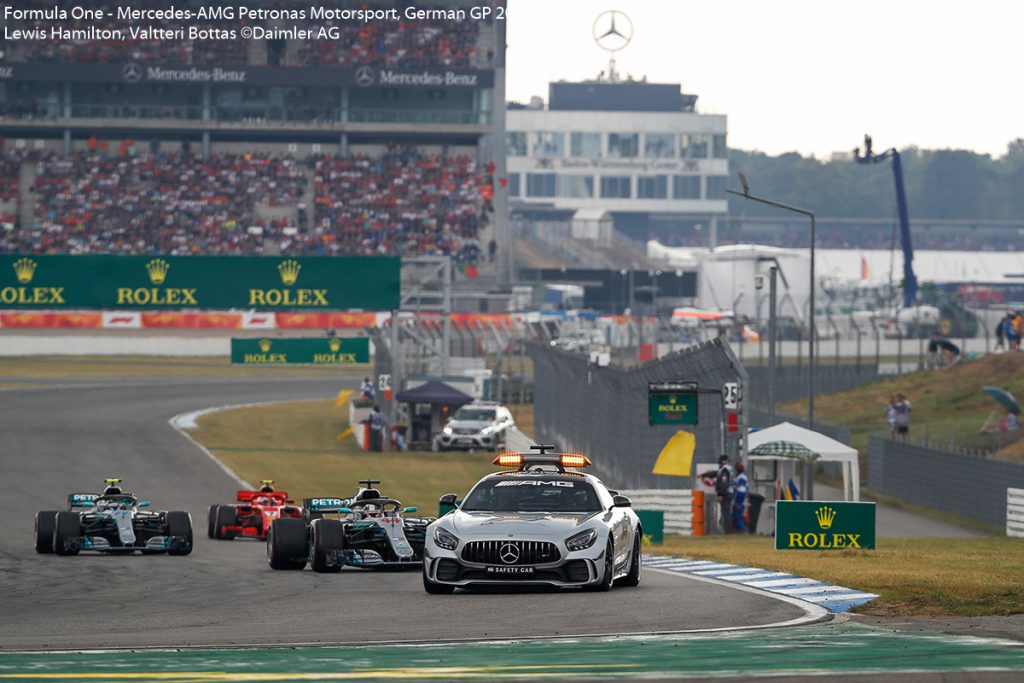 After yesterday we were wondering when our luck was going to change but we’d never expected today’s race to go the way it did. To finish with a 1-2 at one of our home races is amazing, this weekend will be one of those that stays in your memory for ever. It’ s easy to underestimate how difficult it is to stay on track in those conditions on dry tyres so well done to both drivers who made today’s result possible. Valtteri’s race was panning out as we’d expected to Vettel. The dry situation wasn’t very exciting as it was all about driving to tyre temperature limits and as a result Valtteri couldn’t really put the Ferrari under pressure. The second stint was more promising, Vettel was losing time with Kimi and the traffic and it seemed like Valtteri’s tyres were in better condition which helped when the rain started to fall which was helping us close further. Lewis’s plan worked very nicely in the conditions, he did a great job of looking after his tyres in the early traffic and was able to push the stop very late. We decided to fit new Ultras on lap 42 as we could see the rain coming but wanted to be on new tyres when it came as we felt we could ride out the first shower on dries. This paid dividends as he was able to really close on the lead in the difficult conditions. The safety car created the race winning opportunity for Lewis, he had the best tyres of anyone so staying out was not an issue. Valtteri needed fresh tyres to restart so his stop was necessary. It wasn’t a clean stop but luckily it didn’t end up costing a position. After the restart we’d asked the drivers to hold position in the closing stages as the conditions were so tricky and we have to think about both championships given how close our fight is with Ferrari. It’s never a nice call for a driver to hear but Valtteri showed his class and professionalism today and I hope we can see him on the top step soon.