Lewis wins in Budapest with Valtteri in P5 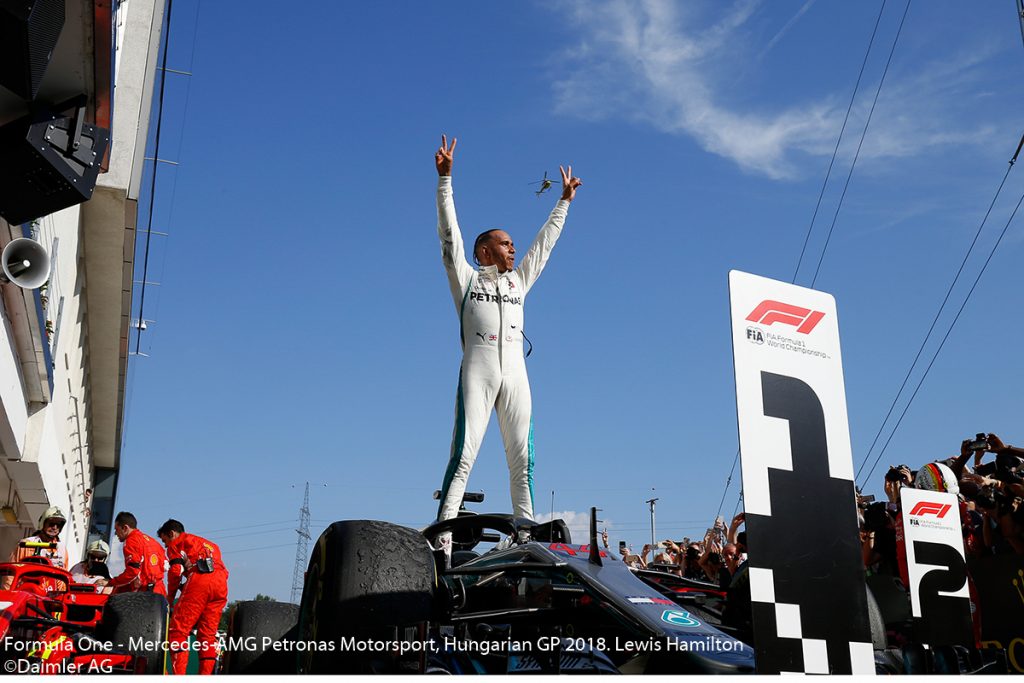 We’ve definitely had ups and downs in this Championship, it’s such a rollercoaster ride – but the team has just remained strong. We’re in a great position right now, but what’s important is that we don’t drop the ball. The last two weekends have been such a blessing with the rain, I’m so grateful. The guys have worked so hard this year, they really deserve a good result. There’s still a lot of work to do because Ferrari are still slightly ahead of us, they had the pace this weekend, especially on this circuit. Today I had them covered, but had they been on pole, we would have struggled. So we’ve got some improvements to make in our overall package to try and close the gap to them, but I’m really happy with the job everyone’s done so far, we just have to keep going. The goal is now to really pull together and become even stronger for the second half. That will be key to add to what we’ve built in this first half of the season. I’m excited about the summer break; I will do different stuff over these two weeks, but I will be training through the whole period of time, trying to improve my physique. Physicality-wise, I’m not struggling out there at all, but there are always areas where you can be better, and I want to make sure I come back with more energy so we can turn up the heat in the second half of the season.

It’s a shame that I ended up in P5; we wanted more today and it would have been great to go into the summer break with a 1-2 finish. I was trying everything I could but the stint on the Soft tyres was just too long. In theory, a one-stop strategy should have worked but we had to stop earlier than we had planned to cover Kimi who pitted in the lap before me. Until about 15 or 20 laps before the end our plan worked out well, we controlled the pace and there was no threat to my position. But then the rear tyres started to die. Towards the end of the race, I had an incident with Sebastian going into Turn 2 – he was on the outside, I still had my nose inside. He turned in early, there was nowhere to go for me, so we touched and I had damage to my front wing. For me it was a racing incident – and so was the incident with Daniel. Again, I was on the inside, he was on the outside. Half of my front wing was missing at that time, I was locking up, and we touched. Now I’m looking forward to the next weeks, a bit of a break will be good, and then I want to come back stronger.”

We came to Hungary with damage limitation as our motto, so it’s pretty good to be leaving after out-scoring our rivals, even if by just a few small points. Lewis drove a faultless race: he made a perfect start, then started building the gap on the UltraSoft tyre. He took that first set longer than we had planned before pitting, then managed the Soft extremely well to the finish. It’s a simple race to summarise but that doesn’t take anything away from the skill it took to deliver such a polished performance. In the other car, Valtteri drove what I think was his best race in his time so far at Mercedes. He held position at the start and then did a perfect job after pitting early until he started to run out of tyres in the final laps. I saw the contacts with Sebastian and Daniel as racing incidents: he was on the dirty inside line in each case and was defending with everything he had left; the trouble was that he didn’t have a lot left at that stage. He raced hard and fifth place is not much of a reward after that drive. Lewis’ win is the perfect way to finish the first part of the season but we know that this one is going down to the wire. The momentum swings one way then the next from weekend to weekend. We need to keep on taking it one race at a time if we want to come out on top.

It is tempting to reach for the clichés about a bittersweet afternoon but actually this just feels sweet. After a tough Friday at a track where we have not always prospered in recent years, today’s result is the cherry on yesterday’s cake. We made brilliant starts thanks to great work by the team and both drivers, held position and then began running our race exactly to plan. Both cars performed strongly just when they needed to: Lewis was in control throughout, managing his pace and tyre temperatures with consummate skill; Valtteri did an exceptional job, stopping very early to cover Kimi, and it was hugely disappointing for him that he was not able to bring home the P2 finish that his performance so richly deserved. Notwithstanding that, it was a fantastic win for Lewis and the team, which sends us into the summer break with a lovely feel-good factor.