Buemi charges back from 16th to fourth, but underweight car results in disqualification

MONTREAL, CANADA (July 29, 2017) – For the first time this season there is a different name at the top of the FIA Formula E Championship points table, after Lucas di Grassi delivered a near-perfect performance to win the inaugural Hydro-Quebec Montreal ePrix. 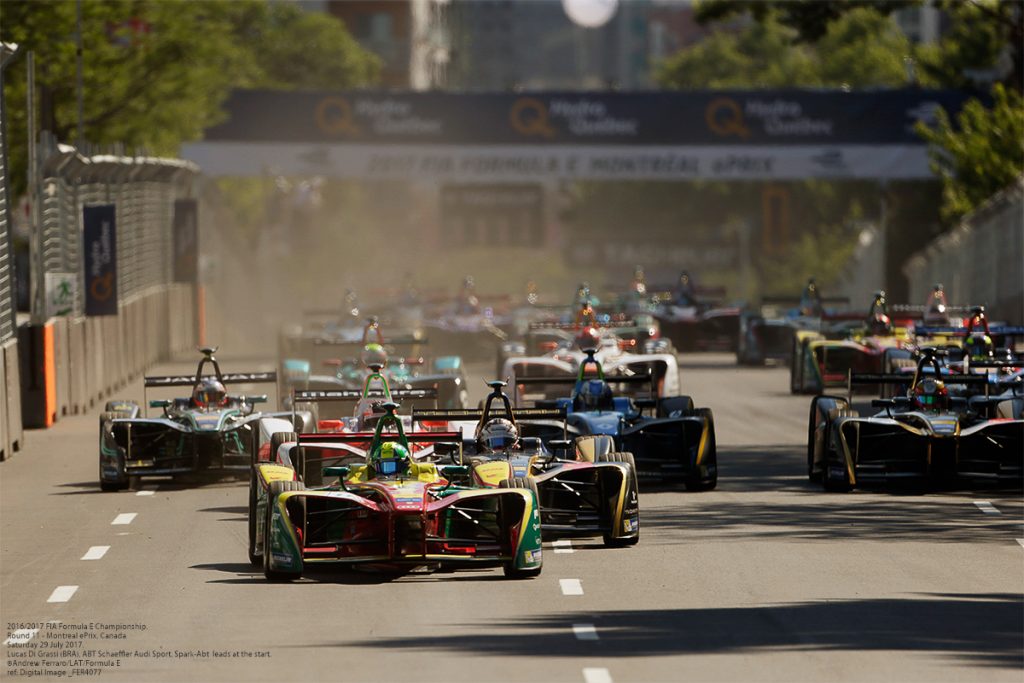 Di Grassi came into the weekend 10-points in arrears, but that was reduced to seven as he beat title rival Sebastien Buemi in a head-to-head fight for Julius Baer pole position, claiming three bonus points in the process.

But Buemi would not line-up on the front row. In the second practice session, he made a slight mis-judgement at the high-speed chicane that leads onto the start/finish straight. He clipped the inside wall with his left front wheel, which pitched him into the exit wall at high speed.

Fortunately, he was unharmed, but the force of the impact damaged the battery. With his Renault e.dams team having already used its ‘joker’ spare unit, the switch meant he would incur a 10-place grid penalty, dropping him to 12th.

Di Grassi made perfect use of his pole to sprint off into a comfortable lead, meanwhile Buemi was caught up in the midfield melee. Contact with Andretti’s Robin Frijns on the opening lap bent his steering and he dropped back to 16th place.

As di Grassi serenely opened his lead, so Buemi fought tooth and nail to climb his way into the points. He had just overtaken the Faraday Future Dragon Racing car of Loic Duval for 10th place, when Nick Heidfeld also attempted a similar move.

Duval refused to yield and there was contact. Duval was left broadside across the track, while Heidfeld’s Mahindra suffered broken front suspension, which forced him to stop on track, causing a Full Course Yellow.

With the drivers now in the energy window required to make the mandatory car change, the majority of the field chose this moment to pit. Di Grassi emerged with his lead enhanced, while Buemi indulged in some horseplay with the sister ABT Schaeffler Audi Sport car as they came into the pits.

A slow pitstop had cost Felix Rosenqvist third place to the charging TECHEETAH of Jean-Eric Vergne, who picked up second when his team-mate Stephane Sarrazin dutifully moved aside. But di Grassi was six seconds up the road and surely out of reach.

Last time out in New York, the DS Virgin Racing cars had been dominant, with Sam Bird winning both races. However, a strange issue in qualifying meant both Bird and Jose Maria Lopez were unable to access full 200kW power, which left them well down the starting order in Montreal.

But it was clear the cars had pace, and in tandem they were working their way up the order. That was until Lopez pushed just a bit too hard and spun into the wall.

The Qualcomm Safety Car was deployed and all of a sudden, di Grassi’s lead evaporated. But a cunning deployment of FanBoost at the restart kept Vergne at bay, and even though Vergne would never let him relax, di Grassi held on to claim his second win of the year, but more importantly, the points lead.

“Today, we had our best day in Formula E,” he said. “I stand here with 28 points at the right moment. So, I think the secret is very easy, just keep it calm, try to do the best you can, try to motivate everyone around you – try to push them for the last two races of the championship. In Formula E, it can go from good to bad with one decision, so you never know. Today we did the job, tomorrow is a completely different day, completely different environment. But we are going to try to do the same as we did today.” 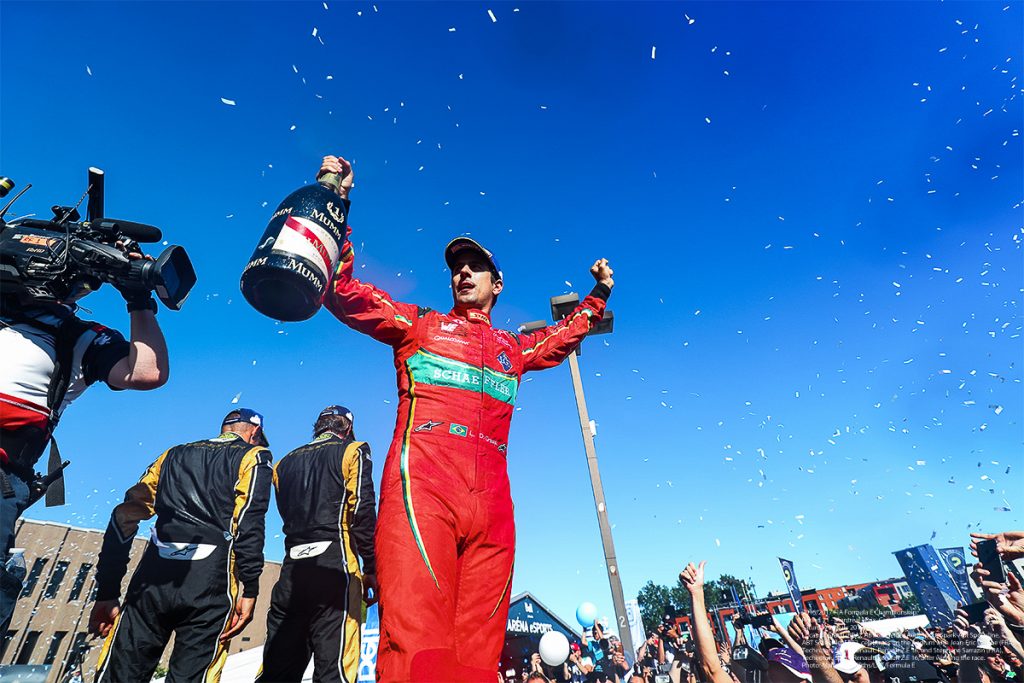 The safety car was a mixed blessing for Buemi. It allowed him to close down on the cars ahead of him, but it also placed his nemesis Abt firmly in his mirrors. The Renault e.dams team had done a truly remarkable job to build him a new car from scratch in under five hours, but he had literally never driven it before he jumped in to embark on his second stint.

Luckily, the driver directly ahead was his team-mate Nico Prost, who not only let Buemi through, but also defended stoutly from Abt. When Rosenqvist tagged the wall, and bent his suspension, Buemi was up to fourth.

On the final lap, he zoned in on Sarrazin and the pair engaged in a thrilling wheel-to-wheel battle, with neither driver yielding a single inch. Eventually the TECHEETAH emerged ahead for Sarrazin’s second podium of the season.

“It’s amazing,” he said. “I’m new in the team at TECHEETAH, so to be back on the podium again is really good. In the race, I was missing a bit of pace and JEV [Vergne] was flying and Lucas was really fast at the front. I saw Buemi coming in my mirrors, he braked really late. We were side-by-side and he touched me a bit, but it was the last lap and I had to defend my podium. I know he’s fighting for the title, but I had to give my best for the team.”

Buemi’s drive in the circumstances was exceptional, however, there would be a sting in the tail. A few hours after the race finished news broke that Buemi’s second car, which the team had worked so hard to complete, was underweight.

The stewards took into consideration the difficult circumstances Renault e.dams was forced to work under, but ultimately the penalty was disqualification. This means that from 10 points ahead, Buemi is now 18 points behind. There are still 29 points to play for – but from being the favourite, he’s now the one with it all to do tomorrow.

Abt was promoted to fourth, Bird to fifth, while Prost was moved up to sixth. Mitch Evans ran as high as fourth after making a sensational start for Panasonic Jaguar Racing. He couldn’t keep that pace up, but seventh place was a valuable return in the teams’ championship fight.

Frijns scored some more points in eighth, Rosenqvist limped over the line in 10th, which became ninth, while Tom Dillmann found himself scoring the final point in 10th. Duval was hit with a drive-through for his role in incident with Heidfeld, but at least had the consolation of collecting a point for the Visa fastest lap.

Now everyone has to regroup and get ready to do it all again tomorrow. The track is universally loved by the drivers and has multiple overtaking opportunities. But it also takes no prisoners and only a fool would predict the outcome of tomorrow’s race.

A Second Exciting  E-Racing Day In Montreal, Canada ist about to start: 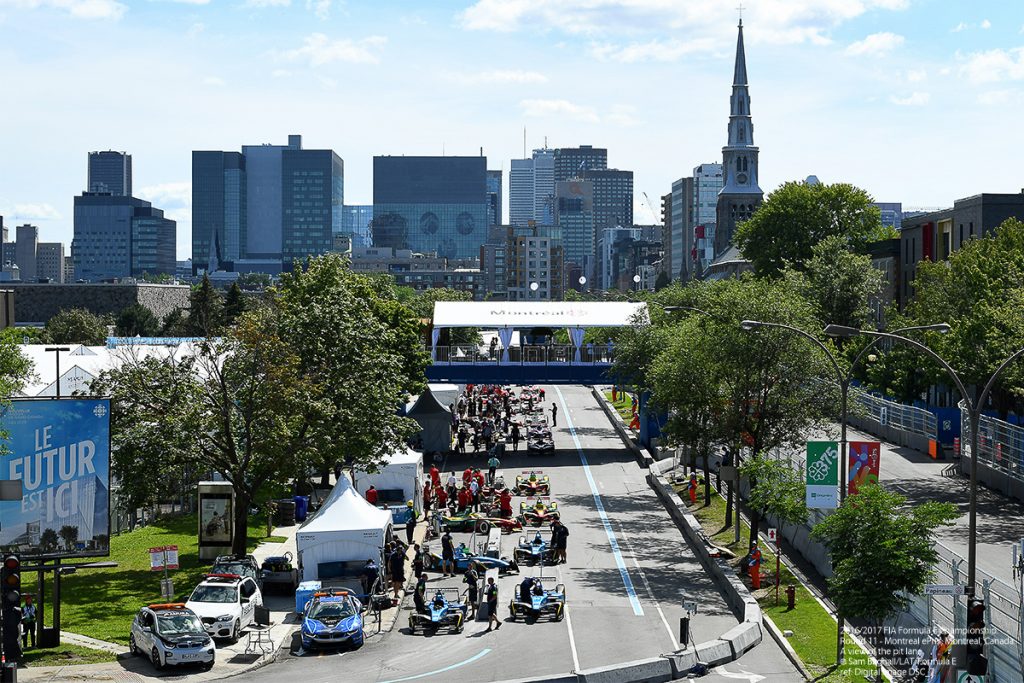