Dutchman wins for second straight year but yet more frustration for Ricciardo.

Max Verstappen continued his surging end to the season by triumphing at an action-packed Mexican Grand Prix in Mexico City.

The Dutchman repeated his victory from 12 months ago at the Autodromo Hermanos Rodriguez to claim his second win of the season and continue his run of finishing on the podium in four of the last five races.

The victory was tinged with disappointment for Aston Martin Red Bull Racing though with pole sitter Daniel Ricciardo having to retire from second place on lap 62. 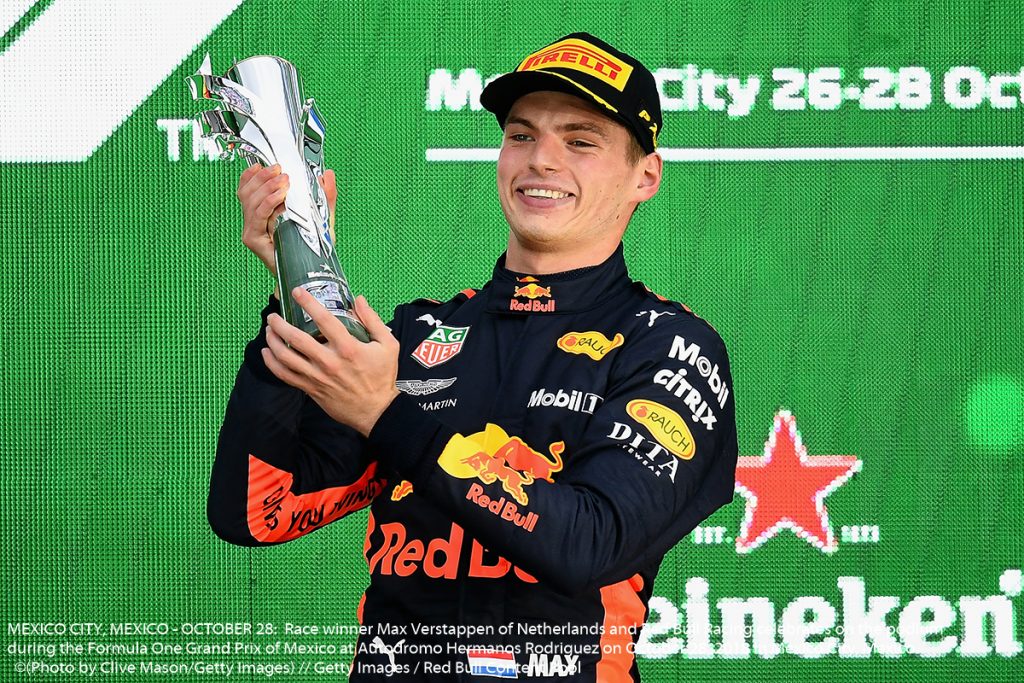 “Yesterday I was very frustrated and disappointed but today I am really happy, and Sunday is the best day to be happy. I didn’t sleep much last night and found today’s race build up a long one, but after the lights went out my feelings soon changed. Once ahead I could just settle in and concentrate on my own race, especially as Lewis looked to be struggling with grip. I made sure I matched his lap times to maintain the lead. We got the strategy spot on again, having another set of Supersofts meant I was able to manage the wear knowing I had a fresh set to go onto towards the end of the race. So when Seb pitted we did the same and were able to keep the gap. When I saw Daniel pull over I asked the Team if they should turn my engine down as I already had such an advantage, I wanted to be sure we made it to the chequered flag. It was such a shame as we were definitely on for at least a double podium, if not a one, two. The podium, like last year is amazing. To have the DJ and the crowd coming down from the stands is really cool, two years in a row makes it even better. Mexico always has so many passionate fans which makes me love coming back here every year. Also congratulations to Lewis on his fifth title, he has been the most consistently strong driver all year and deserves the championship, I’m sure it feels very special. Hopefully I can challenge him for it soon.” 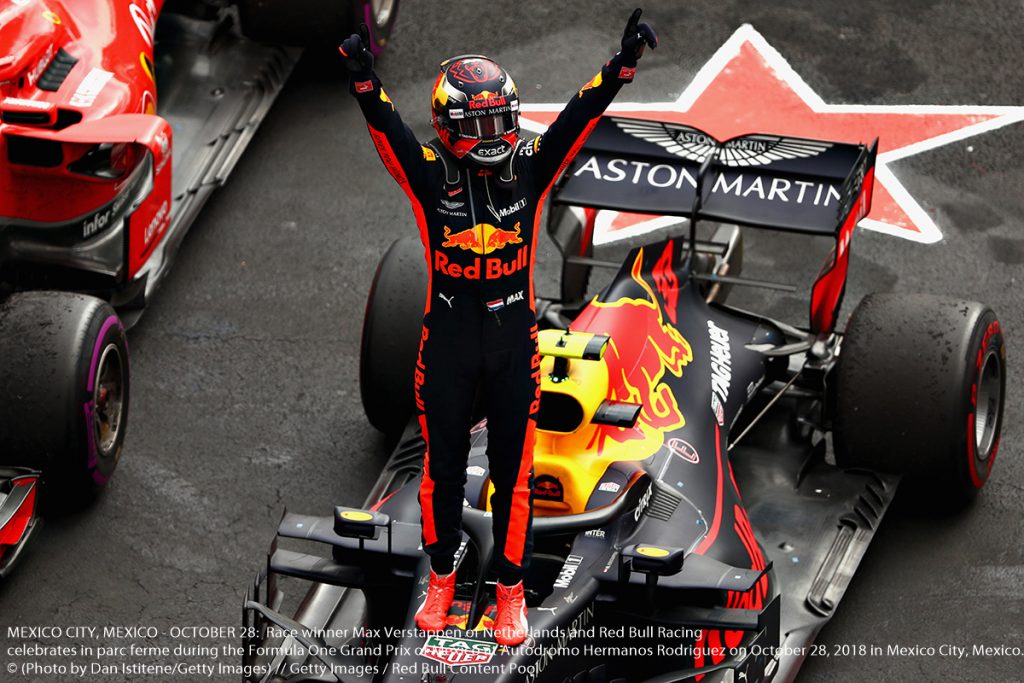 “I saw pass fail on my dash which I guess was some sort of hydraulic failure and I was forced to retire immediately. This sucks and it is at a point where I feel why should I even come on a Sunday. There hasn’t been a clean weekend for so long due to many different reasons and it’s breaking my heart. Deflated comes to mind but this feels deeper than that. I put it on pole but lost out at the start. It just doesn’t seem to happen for me on a Sunday, even if I have a good Saturday. I don’t want to end it like this and I know nobody is doing it deliberately but I just can’t seem to catch a break and a double podium for the Team today was exactly what we all wanted. I’m a very positive guy and I will probably still wake up tomorrow with some sort of positivity.”

“I’m delighted that the Team secured a victory here today, but it’s bitter sweet to have lost Daniel who was fighting so hard to maintain second place. It was a fantastic drive by Max. He reacted incredibly quickly at the start and managed to hold his line and re-pass Lewis into Turn 1. From there Max controlled the race in an extremely mature manner. We elected to adopt a two-stop strategy to cover the cars behind in what turned out to be a dominant win for Max. The frustration for us as a Team is that we didn’t have both drivers on the podium. Daniel lost out at the start after getting a little too much wheel spin but he then settled into a great race pace. Seeing the tyres come off Max’s car at his second stop we elected to leave Daniel out on a one-stop strategy, which he was making work in second place and defending brilliantly against Sebastian. With nine laps to go Daniel had a sudden hydraulic failure which caused him to retire immediately. It is hugely frustrating for the Team not to have both drivers up on the podium, especially when it’s such a great celebration here. Our apologies go to Daniel today and we will fight as hard as we can in the last two races of the season to secure a positive result for him. Thanks to our engine partner, who in challenging conditions provided us with a power unit this weekend that was capable of taking on and beating the best. Congratulations also to Lewis on securing his fifth Formula 1 World Championship which is quite an achievement and puts him amongst the sports’ elite.” 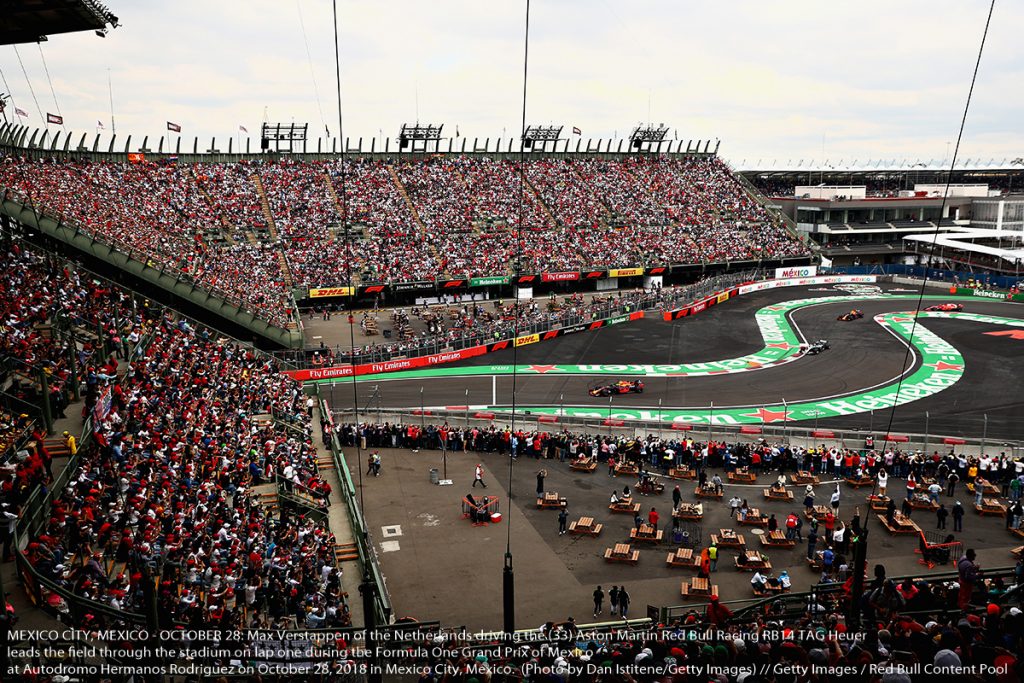