Mexico, 28 October –Two Ferraris on the podium – Seb ahead of Kimi – after a difficult qualifying. With two races to go, the Constructors’ championship is still up for grabs, after the Scuderia has closed the gap by 23 points in the last two races. 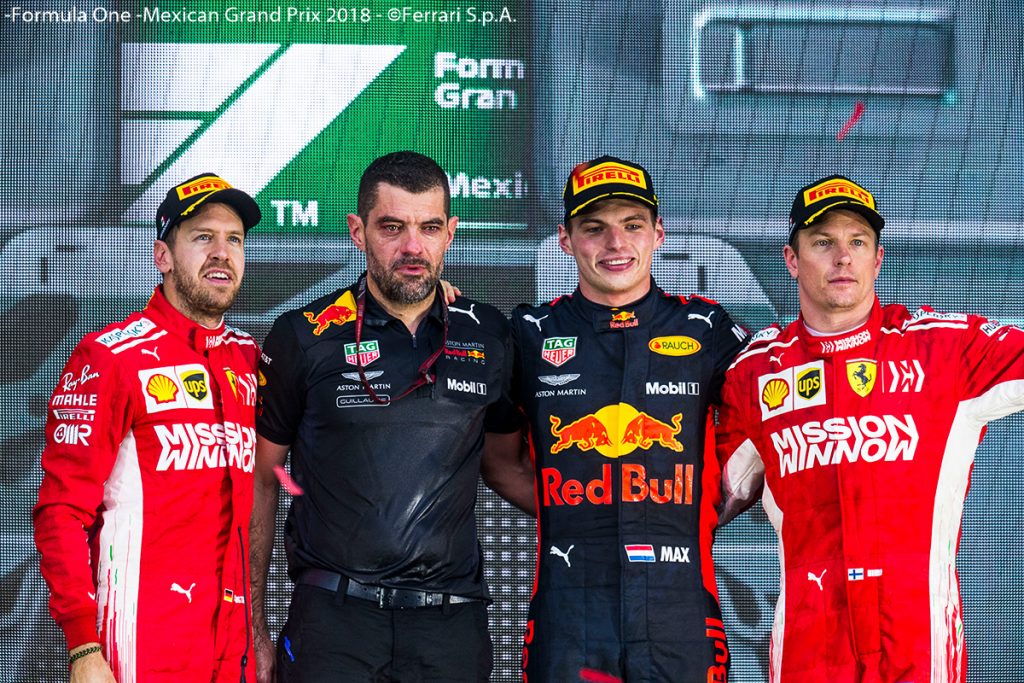 FILM OF THE RACE. The top six on the grid were all on Ultrasoft tyres, the middle compound available. Seb was fourth and Kimi sixth on the grid, a bit bottled up after the start as Ricciardo’s Red Bull was slow off the line. Bottas made the most of it to pass Seb, who fought back to retake the position at turn 4. Kimi was seventh but soon got back ahead of Sainz.

Tyres were the key to this race and Mercedes changed theirs on lap 12, going on to the prime Supersofts, the hardest available. Then Ricciardo came in, while Sebastian stayed out. Verstappen pitted and the number 5 car was leading, followed by the other Ferrari. However, Kimi was struggling with graining and could not match Max’s pace on fresh tyres. Then came a fight with Hamilton and Ricciardo, which gave his team-mate a bit of breathing space, and he pitted on lap 18 followed by Kimi. At the end of the first run of pit stops, the positions remained unchanged, but the Reds were on fresher tyres, although everyone was on the same Supersoft compound.

With a third of the race completed, was it best to save the tyres as much as possible and go all the way to the end, or to push hard and make a second stop? So at this point, Seb stopped attacking Ricciardo. The two of them were mired in back markers, with everyone using DRS down the straights. Lap 31 seemed like the right moment, but the Virtual Safety Car came out after Sainz parked on track. 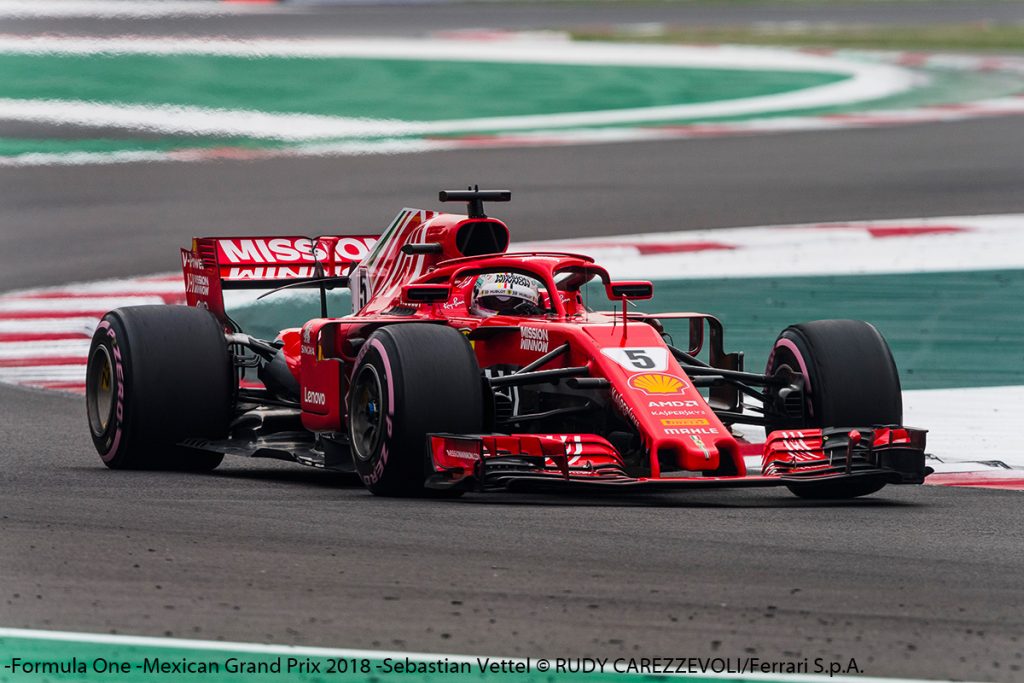 Two more laps and the race was on again. On lap 34, Seb pulled out all the stops and made the most of the backmarkers t make the decisive attacking move at turn 2. He was now the quickest man on track and closing on Hamilton.

Laps 38/39: Seb was glued to his rival in the stadium section, flipping open the flap down the straight to pull off a clean passing move at the first braking zone. He was now second. “Try and go with Plan A as long as you can,” he was told over the radio. Meanwhile Kimi had massively closed down Bottas by 15 seconds, so the gap had dropped to just two. Hamilton ran wide, under attack from Ricciardo and lost the position.

It was time for Seb’s second pit stop and Hamilton did the same. The Ferrari was now on new Ultrasofts, while on the Mercedes they were worn. Then came a fight between Kimi and Bottas, which produced a carbon copy of their team-mates’ clash as the Mercedes man ran wide. A great move from the Iceman to put Ferrari in third and fourth places. Ricciardo was on used rubber, but Seb was unable to close on him because of traffic.

Ten laps to go: “Ricciardo’s car’s smoking,” Sebastian is told over the radio and a few moments later the Ferrari was promoted to second. The Virtual Safety Car was out again, Kimi stayed out in third place, as Bottas pitted.

That’s how it ended with the two Ferraris behind Verstappen and Hamilton coming home to take the world championship title. We have not won, but we have shown what can happen if you never give up. 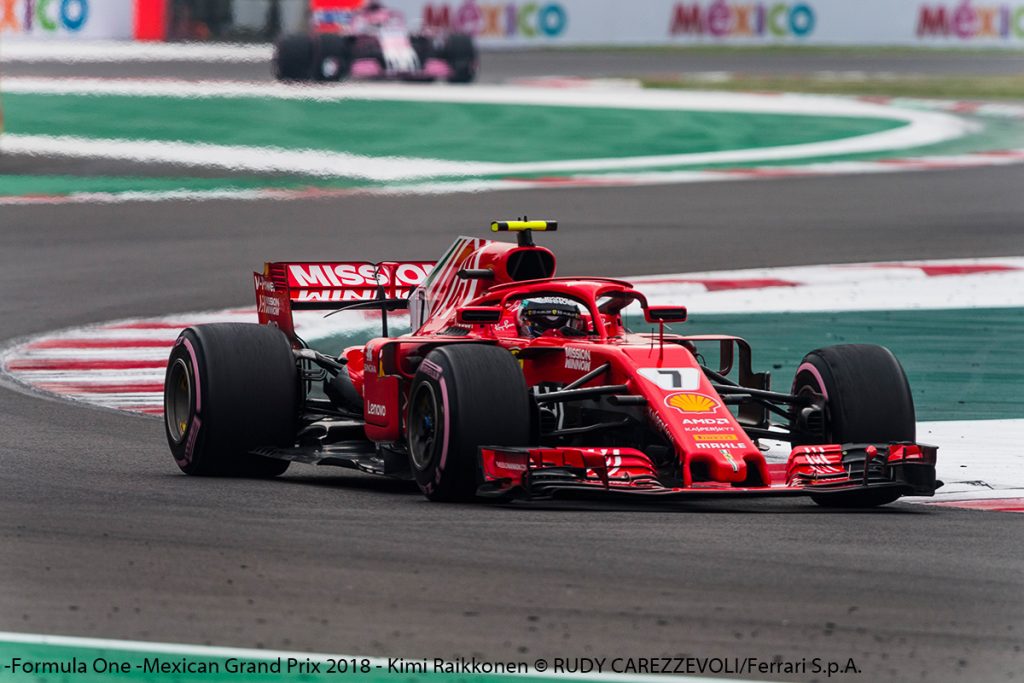 Maurizio Arrivabene: ”Today’s result reflects the determination of the entire team, after a less than ideal qualifying on a track where aerodynamic downforce and tyre management are fundamentally important. Seb and Kimi both drove great races. Thanks to the efforts of the team, both here at the track and back in Maranello, the Constructors’ Championship is still undecided and the team has closed the points gap over the past two races. We are therefore determined to fight all the way to the finish, starting with the next GP in Brazil. Congratulations to Lewis Hamilton on his fifth Drivers’ World Championship title.”

Sebastian Vettel: “I’m glad that Kimi and I were on the podium today and also because the atmosphere here is always great, but obviously I am disappointed for the result of the drivers’ championship. At the beginning of the race I was looking after my tyres a little bit. Then, after passing Lewis, we thought about putting some pressure on Max, also trying something different in case they would start to struggle with their tyres towards the end, but he was too quick to catch. I want to congratulate him for this race and Lewis on winning the championship. This is not a very happy day for me, but one thing is being down and another is not being able to get back up, and I know that in two weeks I will be back up and try my best to finish the season well and fight for the Constructors’ championship.”

Kimi Raikkonen: ”Today I was pretty happy with the car. Obviously the result is not ideal but from where we started we did our maximum. We got two cars on the podium and some more points for the team. The first set of tyres was a bit tricky, for sure the second one was better, but that’s what we expected to be. In the first stint we tried to pass the Mercedes, but we did not manage and the tyres suffered from this attempt. Then we changed from two stops to a one-stop strategy, knowing it would be a long race; the tyres were actually really good in this phase. In the end we ran out a little bit with the left front, but it still worked pretty good. Hopefully we can close up in the Constructor Championship in the last two races. Congratulations to Lewis; he has done the best job of any of us this year and he deserved to win.” 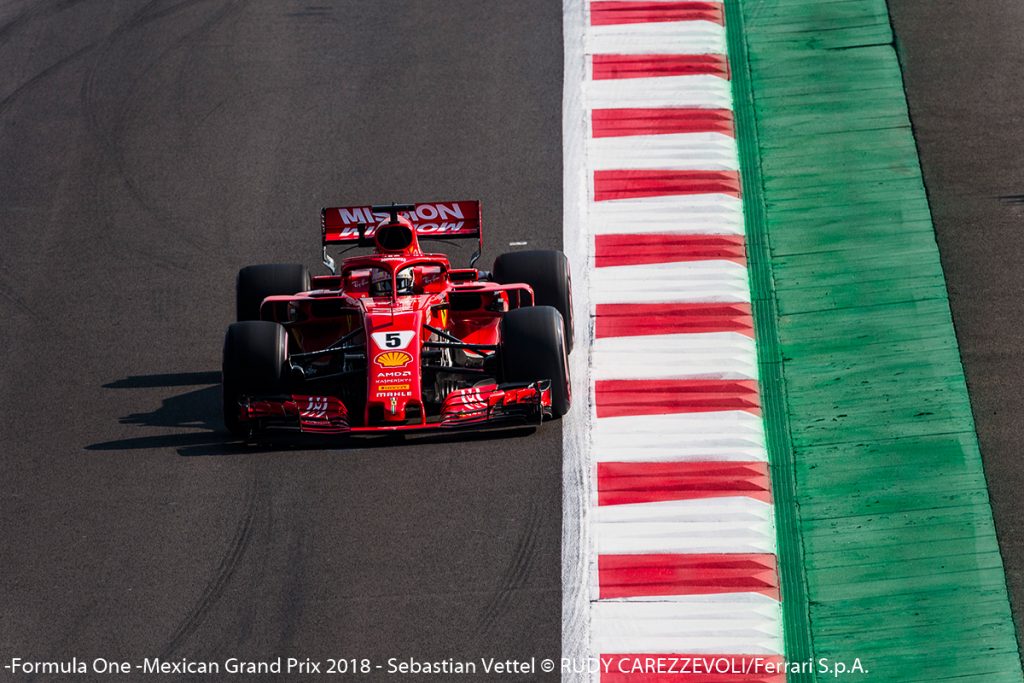