The Qatar Prix de l’Arc de Triomphe is the most coveted trophy in the world of racing.
In 2016, it assumed another dimension when it became the final of the EpiqE Series Flat racing Championship.

The Qatar Prix de l’Arc de Triomphe weekend boasts a prestigious two-day racing programme with no fewer than 15 flat races, nine of which have Group 1 status, the highest category of horse race.

In the weekend’s most eagerly-anticipated race, the very best racehorses from all over the globe paired with internationally-renowned jockeys will compete in the year’s most important flat race, the final flat stage of the EPIQE Series: the Qatar Prix de l’Arc de Triomphe.

The Qatar Prix de l’Arc de Triomphe weekend is also an opportunity to admire another racing breed, the Purebred Arab, in action.
A forefather of the English Thoroughbred, these elegant horses will contest the Qatar Arabian World Cup.

Boasting a million euros in prize money, the most prestigious race for Purebred Arabs aged 4 and over is run over a mile and two furlongs and is one of the highlights of this action-packed weekend! 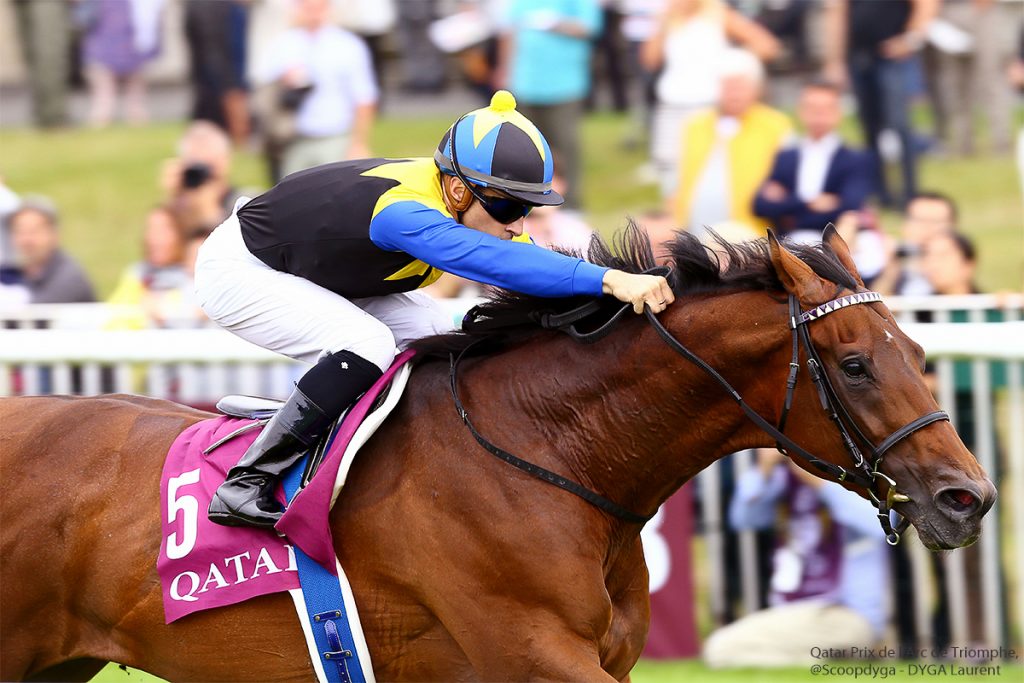 This Championship embraces 14 major races in the French calendar and is spread over two seasons: In the Flat Racing Championship, the Qatar Prix de l’Arc de Triomphe is the final event, while the Trotting Championship finishes with the famous Prix d’Amerique.

If the Arc covers the winner of the race in glory, the EpiqE Series Championship crowns the jockey who has been the most successful in the 7 chosen international Championship races, culminating obviously with the Qatar Prix de l’Arc de Triomphe.

Who will follow in the footsteps of Maxime Guyon, who won the EpiqE Series Championship last year?

The 1 October at Chantilly will give us the answer.

With 1 Million Euros prize-money, the Qatar Arabian World Cup is the most prestigious race in the world of Purebred Arabian racing and one of the highlights of the Qatar Prix de l’Arc de Triomphe weekend.

Horses from this historical breed, aged four and older, compete over the 2000 meter distance. This race is the climax of the year in the Purebred Arabian racing calendar. Mirroring the Qatar Prix de l’Arc de Triomphe, it is an international event, as the world’s best Purebred Arabians, owned by the biggest stables in the world, are entered in this race. 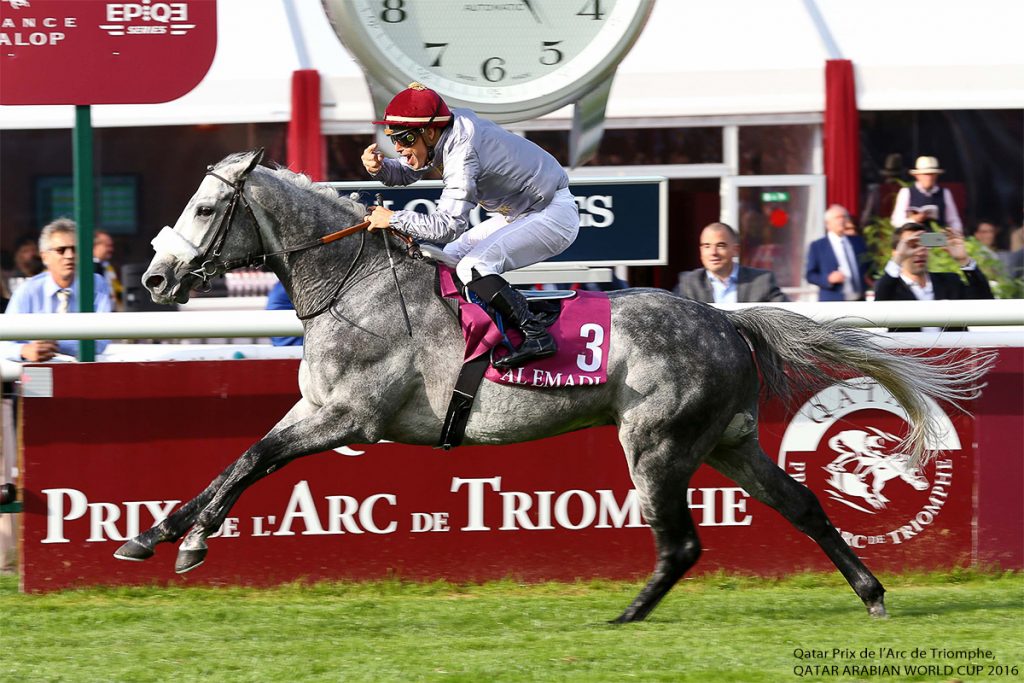 The Qatar Arabian World Cup is one of the three legs of the Doha Triple Crown.

This challenge, created in 2015 by the Qatar International Equestrian Committee, features three prestigious races: the Qatar International Stakes, which takes place at Goodwood in August, the Qatar Arabian World Cup at Chantilly in October and the HH.
The Emir’s Sword Race at Doha in February.
A 1 Million US Dollars bonus is awarded to the horse that wins all three races of the Doha Triple Crown 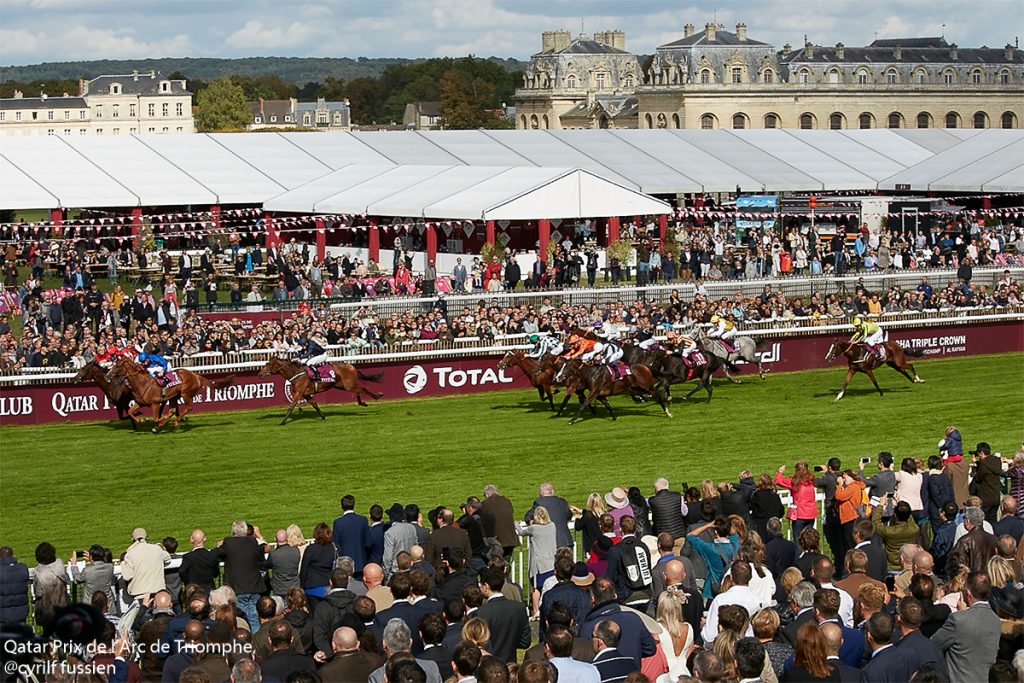 The year’s most eagerly-awaited equestrian event, the Qatar Prix de l’Arc de Triomphe is an opportunity to watch the world’s racing elite in action!

For two days, the racecourse comes alive with the sound of cheering crowds from all over the globe!

The Qatar Prix de l’Arc de Triomphe is the climax of the flat racing season and the most eagerly-anticipated race of the year!

After winning the most prestigious races in their respective countries, the world’s top gallopers do battle in the season’s most hotly-contested event.
This legendary event keeps television viewers from all over the globe in suspense until the last second, when the winner is crowned world number one! Do not miss the final flat stage of the EPIQE Serie

2 – Feel the emotion of sporting exploits

The Qatar Prix de l’Arc de Triomphe gives you the unique opportunity to watch 15 top-level races over one weekend. Share your exhilaration with like-minded racing fans, who travel from all over the world especially for this event! 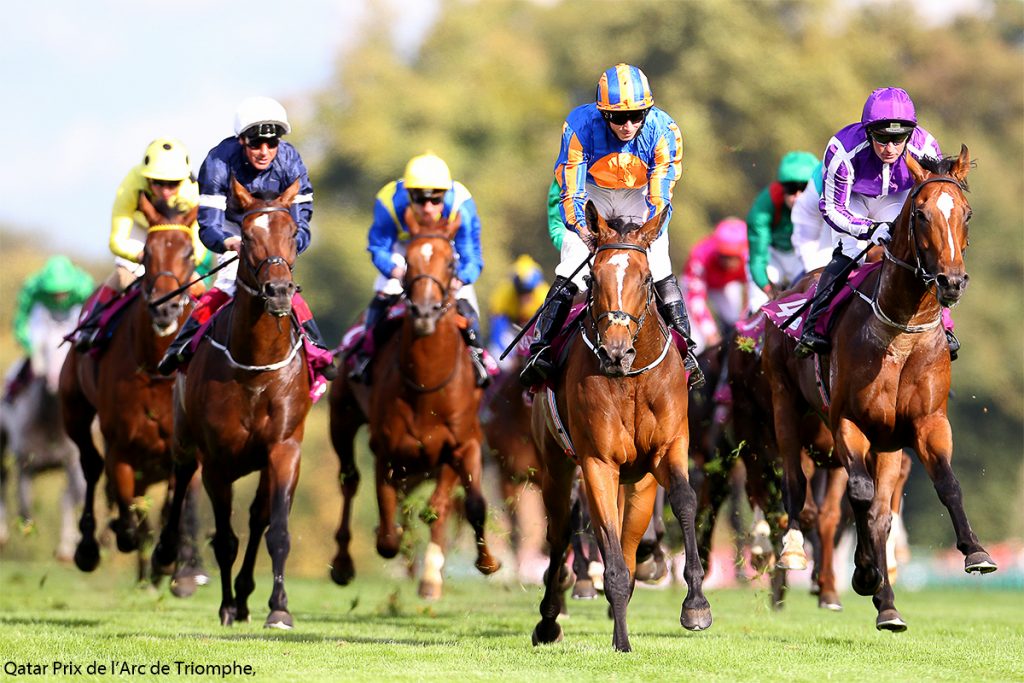 Every new race is another chance to win: Get into the spirit by betting on your favourite horse and cheer on thoroughbreds from all over the globe.

Get your adrenaline pumping with a turn on the Racing Experience: Our simulator lets you feel what it is like to be in a real jockey’s stirrups.

Our racing experts will be on hand in the Easy Racing Zone to teach you everything you need to know about racing!

For the second and last time ever, the Qatar Prix de l’Arc de Triomphe will be held in the majestic Chantilly racecourse, the veritable birthplace of horse racing.

Look out from the stands over the stunning course, which is framed by the beautiful Grandes Écuries and château.

Longchamp racecourse, where this prestigious event is traditionally held, is currently undergoing a full renovation to become one of Europe’s most modern racecourses when it reopens in April 2018. 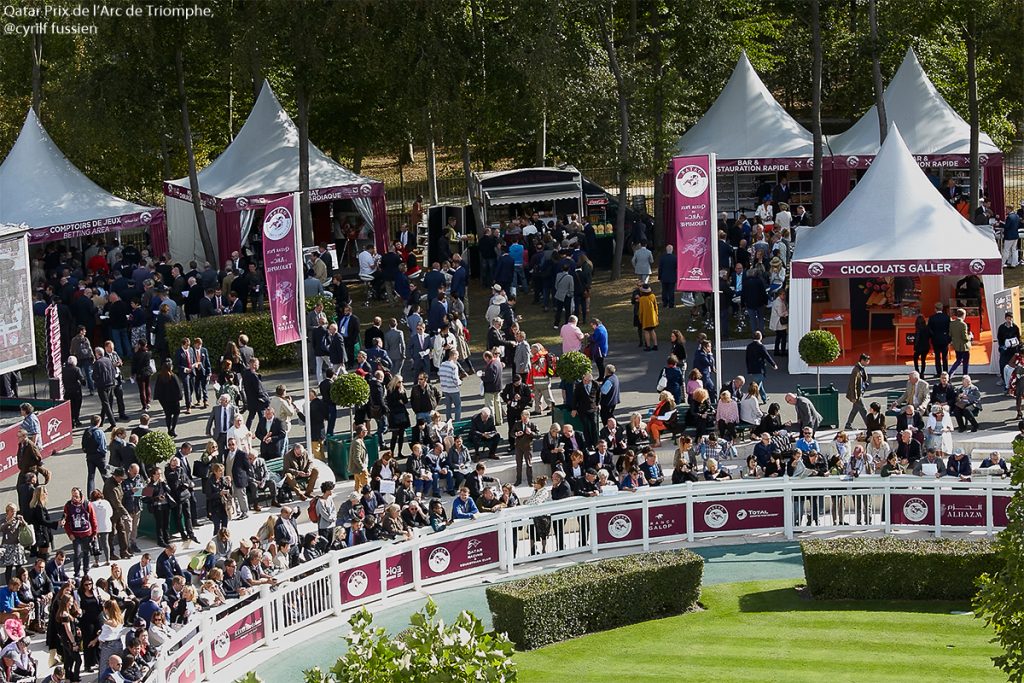 At the Qatar Prix de l’Arc de Triomphe, there is plenty to keep you entertained both on and off the course.

Racing fans can head to the parade ring to admire the mighty thoroughbreds from up close, while less avid spectators can rub shoulders with celebrities as they stroll around the racecourse, stopping to pose for the photographers who come to immortalise this unique event.

Come and be part of the year’s most prestigious equestrian event!

5 – Get into the thick of the action

Located right at the edge of the course, on the racecourse’s central lawn, the Arc Village is a private area where spectators can relax.
Offering various catering options, special betting windows, race simulators, giant screens and DJ sets, it is the perfect place to experience the thrill of racing in a convivial setting!

Do you want front-row seats for the year’s greatest sporting event?

Come along to the Arc Terrace, a luxury private area located on the home straight!

You will be treated to unhindered views of the finishing post, a private bar and special betting windows. A DJ will provide the soundtrack to your day, putting the racing action to music!

Chantilly, the world’s largest training ground for thoroughbreds is in France!

Chantilly’s training centre, which is managed by France Galop and located just a few miles outside of Paris, is the only centre of its kind in the world. Bright and early every morning, more than 2,500 racehorses head out to train on the centre’s 2,000 hectares of gallops. This magnificent sight is orchestrated by 110 trainers and 1,000 exercise riders. 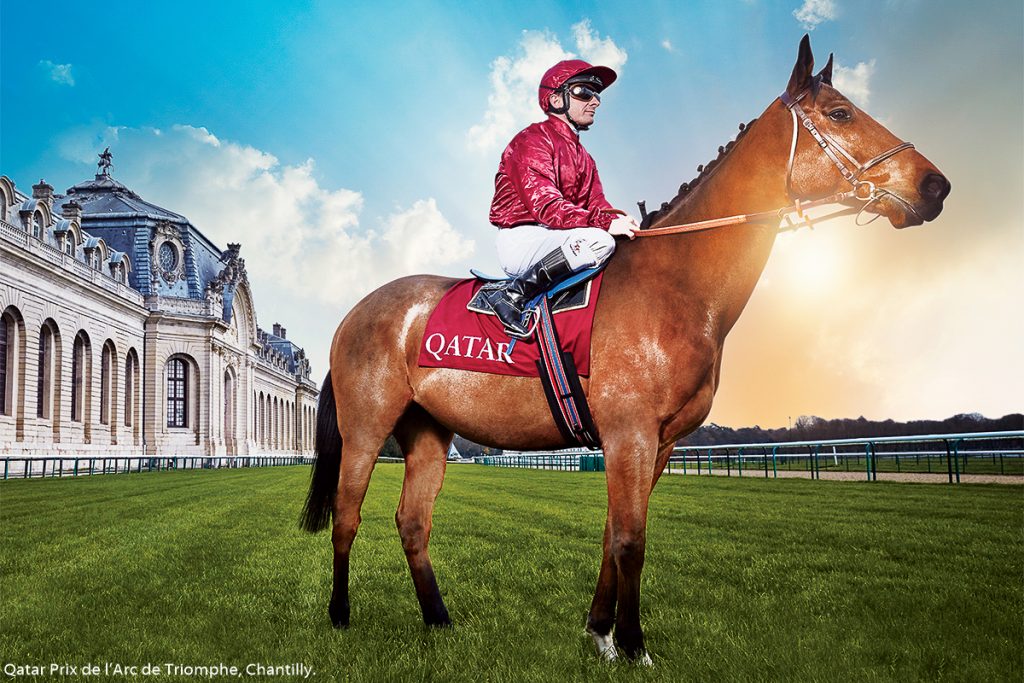 The charms of the Chantilly Estate

Less than an hour’s drive outside of Paris, the Chantilly Estate houses treasures that have been passed down its line of illustrious owners: Anne, Duke of Montmorency, the Bourbon-Condé lineage, Henri d’Orléans, Duke of Aumale. The château is home to the Condé Museum and its collection of paintings, among which are masterpieces by Raphaël, Botticelli, Clouet, Poussin, Watteau, Ingres, Delacroix. Inside the château, the Cabinet des Livres library boasts 13,000 books, including the world’s most precious manuscript: Les Très Riches Heures du Duc de Berry (15th century)!

The estate’s 115 hectares of grounds are unique thanks to the hugely diverse gardens. The Grandes Écuries, a masterpiece of 18th century architecture, are among the most luxurious stables in the world. Inside, the Horse Museum gives an insight into the relationship between man and horse, while the team of 20 horses and 7 riders give performances all year round.

THE FINAL OF THE EPIQE SERIES LIVE ON TF1!
On Sunday, 1 October, the Qatar Prix de l’Arc de Triomphe will be shown live on TF1 and will feature in a special programme on LCI.