Fernando Gaviria of Quick Step became the first Colombian to win a bunch sprint of the Tour de France and the second Colombian to take the yellow jersey, fifteen years after Victor Hugo Peña, as he outclassed Peter Sagan in Fontenay-le-Comte. The finish was reached at the fastest expected speed but not without damage for the favourites as Chris Froome, Richie Porte, Adam Yates and Nairo Quintana lost a significant amount of time in crashes and mechanicals. 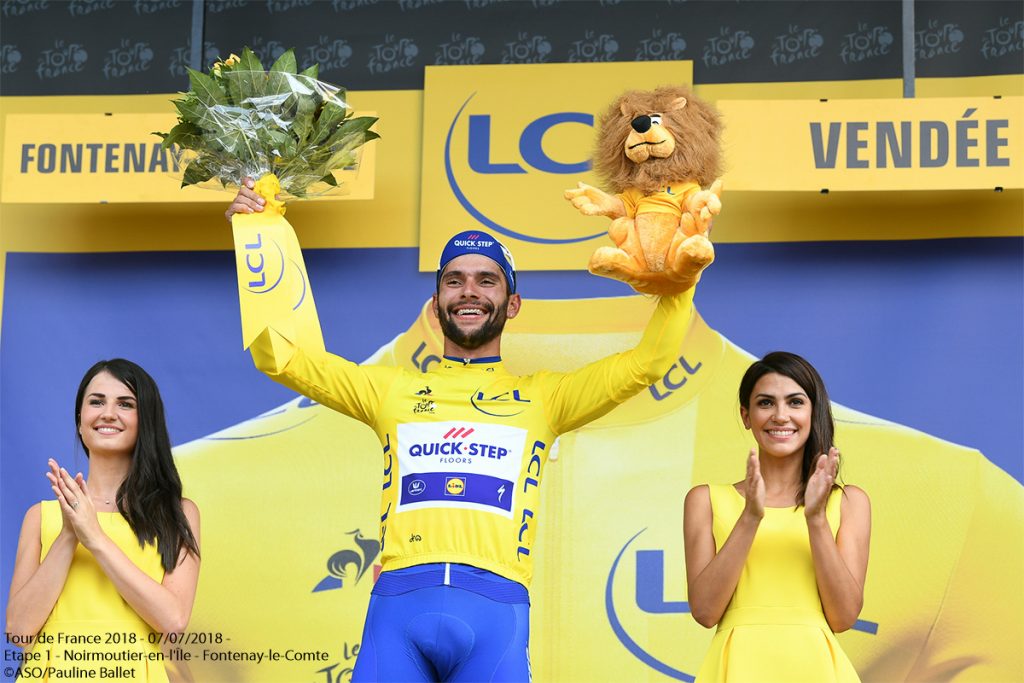 176 riders took the start of the 105th Tour de France at 11.10am in Noirmoutier-en-l’Île. Yoann Offredo (Wanty-Groupe Gobert), Jérôme Cousin (Direct Energie) and Kevin Ledanois (Fortuneo-Samsic) rode away from the gun. Their maximum advantage was four minutes at km 20 before the peloton got organized with sprinters’ teams Quick Step, LottoNL-Jumbo, Dimension Data and Groupama-FDJ keeping the distance around three minutes. At half way into the race, the time gap was 2’30’’. Lawson Craddock (EF-Drapac) crashed in the feed zone and struggled to make it back to the pack. 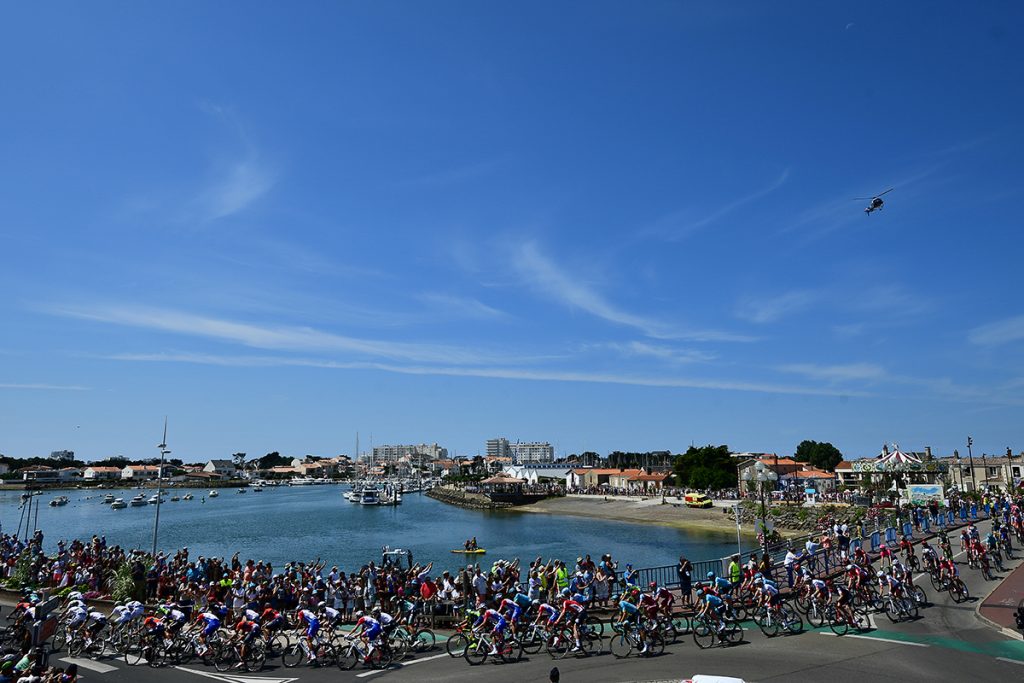 Gaviria first of the bunch at the intermediate sprint

Fernando Gaviria (Quick Step) interestingly won the sprint of the peloton at the intermediate sprint of La Tranche-sur-Mer (km 119.5), behind Cousin, Ledanois and Offredo. The leading trio managed to stay at the front before the only King of the Mountain price up for grab at Vix with 28km to go. Ledanois smartly outsprinted his two rivals to take the first polka dot jersey this year. As the peloton was only 30 seconds adrift, Offredo attacked again 23km before the end. Only Cousin managed to bridge the gap. It gave him the opportunity to take three seconds at the bonus point of Maillezais with 13.5km to go while Oliver Naesen (AG2R-La Mondiale) has attacked from the peloton to grab one second and position his team higher in the convoy in the next stage. 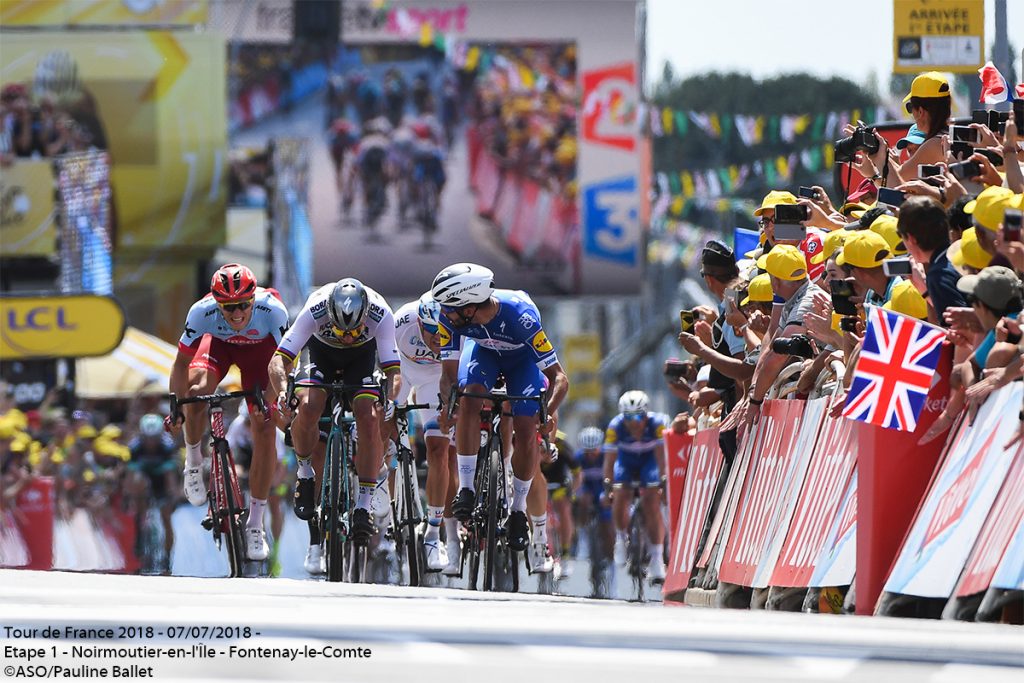 Froome, Porte, Yates and Quintana with a deficit

Offredo was designated the most aggressive rider of the day but he was caught by the peloton along with Cousin with 10km to go. Arnaud Démare (Groupama-FDJ) was the first big name to crash but there was more to come with Chris Froome (Sky), Richie Porte (BMC) and Adam Yates (Mitchelton-Scott) being other victims in the last 5km. Nairo Quintana (Movistar) had a mechanical with 3.4km to go. They couldn’t make it back to the pack before the finish where Gaviria benefited from a perfect lead out by Quick Step to win the bunch gallop against Peter Sagan (Bora-Hansgrohe). 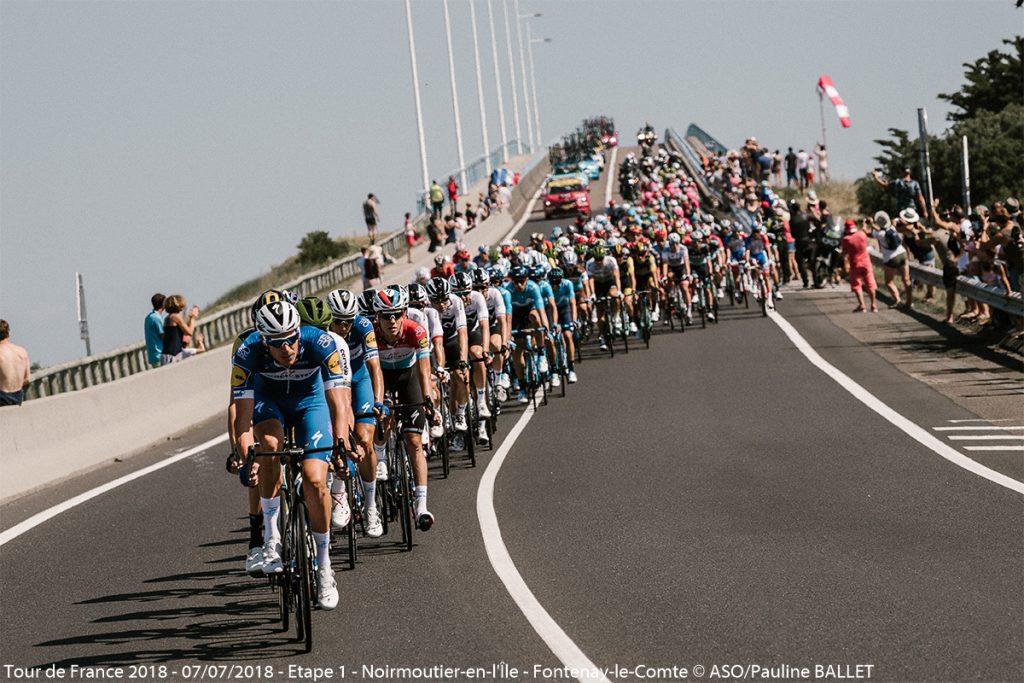 80 years after the last visit of the Tour de France and the victory of Eloi Meulenberg, another world champion won at La Roche-sur-Yon as Peter Sagan sprinted to victory after Fernando Gaviria crashed in the last curve. The Slovakian champion got the yellow jersey back two years after he first took it in Cherbourg. 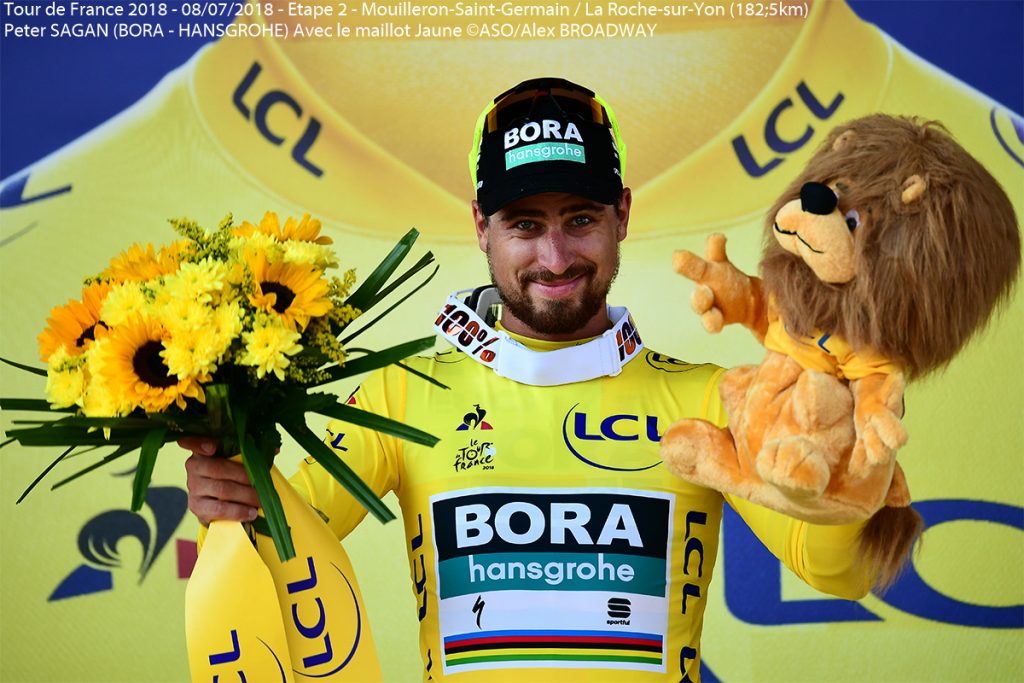 176 riders took the start of stage 2 in Mouilleron-Saint-Germain. Direct Energie was the most active team after the flag off. Sylvain Chavanel managed to go clear after 3km of racing, along with Dion Smith (Wanty-Groupe Gobert) and Michael Gogl (Trek-Segafredo). Smith won the sprint for the only KOM price of the day at côte de Pouzauges (km 28) with the aim of becoming the first ever New Zealander to wear a distinctive jersey at the Tour de France. After the sprint, Gogl called the medical assistance for a pain his right leg and went back to the bunch. Smith also considered his mission accomplished and waited for the peloton. At km 35, Chavanel found himself alone in the lead with an advantage of 2’50’’. 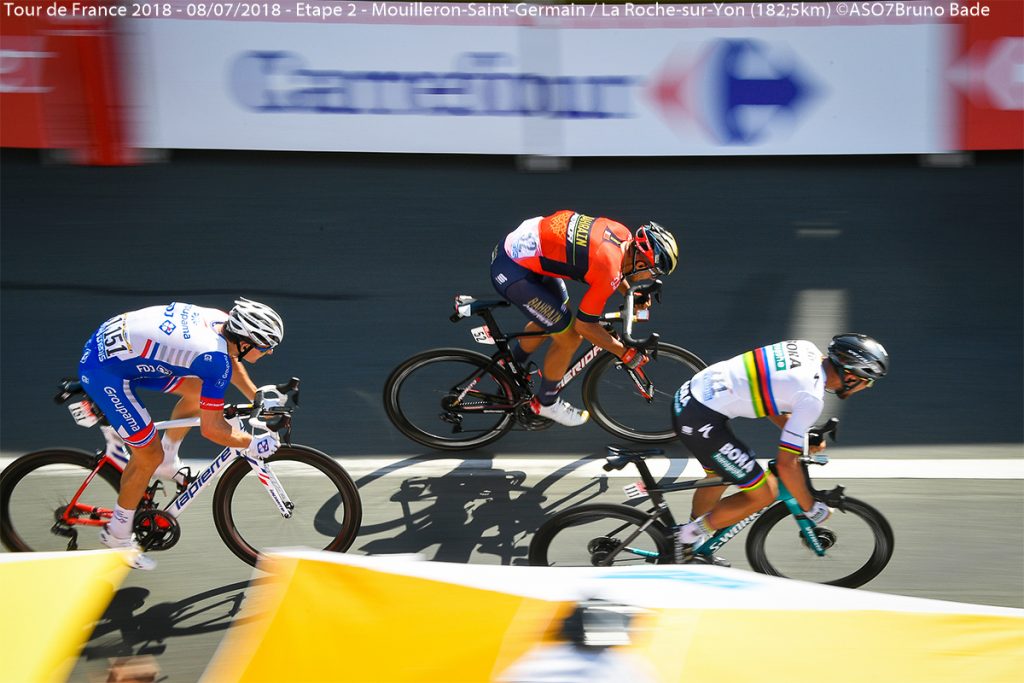 Chavanel’s odyssey pleased the local crowd but he raced with no illusion. His lead was 3 minutes at km 50 and 4’25’’ with 100km to while Quick Step’s Tim De Clercq maintained a steady pace at the front of the peloton. The first withdrawal of the 105th Tour de France occurred when Tsgabu Grmay (Trek-Segafredo) called it a race in the feed zone at km 86 because of abdominal pains. Luis Leon Sanchez (Astana) was the second man out as he heavily crashed on a central reservation with 40km to go. Another crash involved Adam Yates (Mitchelton-Scott) who already lost time on stage 1 after a fall. The Brit was back in the pack with 25km to go, where Chavanel’s advantage was reduced to 1’15’’. 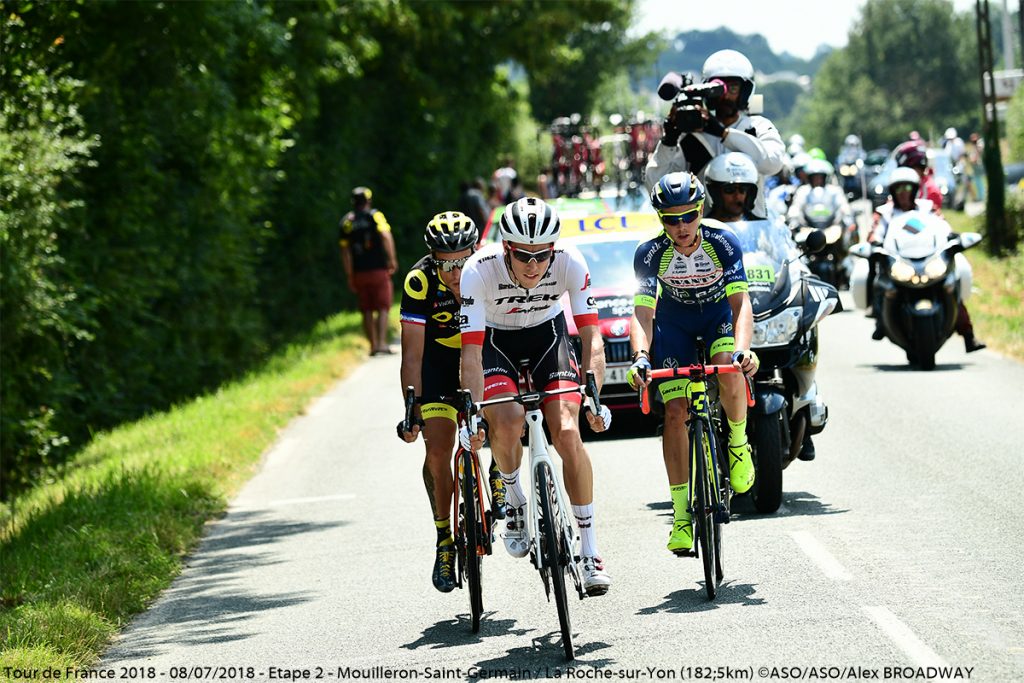 Gaviria crashes in the finale

Chavanel got reeled in after 170km of riding at the front. He took the price of the most combative rider and three seconds bonus with 14km to go whereas Philippe Gilbert (Quick Step) and Geraint Thomas (Sky) got two and one seconds respectively with the leading positions of the peloton. It was all together again with 13km to go. Marcel Kittel (Katusha-Alpecin) punctured with 8km to go and was out of contention for the sprint. Fernando Gaviria (Quick Step) crashed 1.8km before the finish. Arnaud Démare (Groupama-FDJ) who had a flat tyre with 20km to go launched the sprint from far along with John Degenkolb (Trek-Segafredo) but Peter Sagan (Bora-Hansgrohe) timed it well to fend off Sonny Colbrelli (Bahrain-Merida) and power to victory. 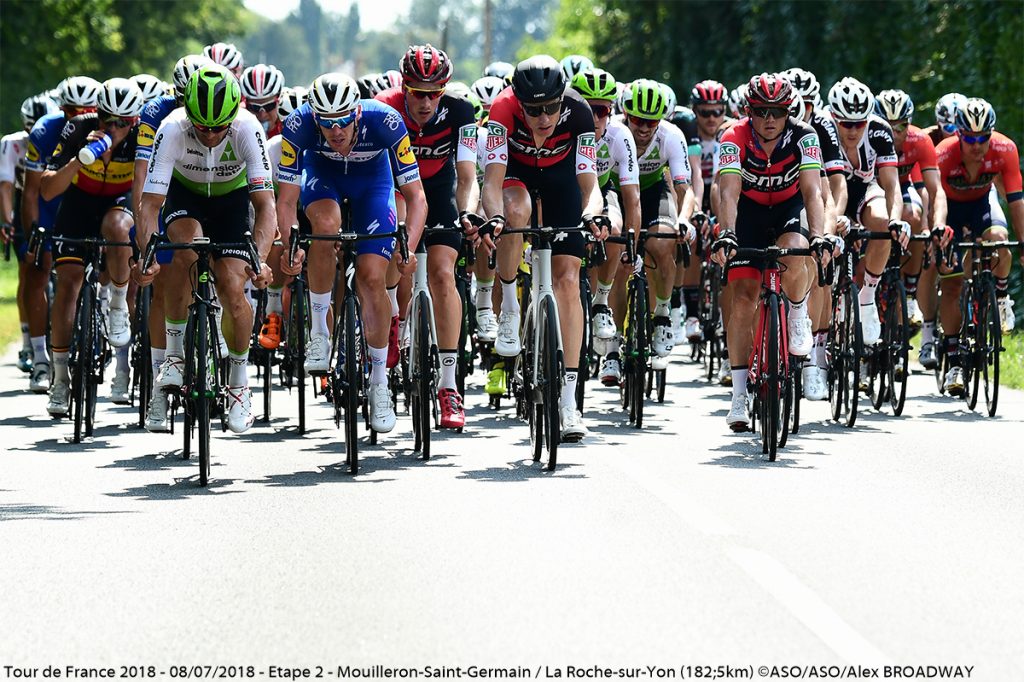 It was business almost as usual for Team BMC in Monday’s stage 3 as they confirmed their status as the world’s leading team time trial specialists to win the 35-km effort in Cholet. Richie Porte and his team-mates, five of which were already in the team who won a TTT on the Tour in 2015, clocked 38:46, to upstage pre-stage favorites Team Sky by four seconds. Third place went to Quick Step, who lost the stage and their yellow jersey chances by seven seconds. Peter Sagan, who was dropped by his Bora Hansgrohe team-mates, handed his yellow jersey to Greg Van Avermaet, who already led the Tour de France for three days in 2016, the year he also became Olympic champion. 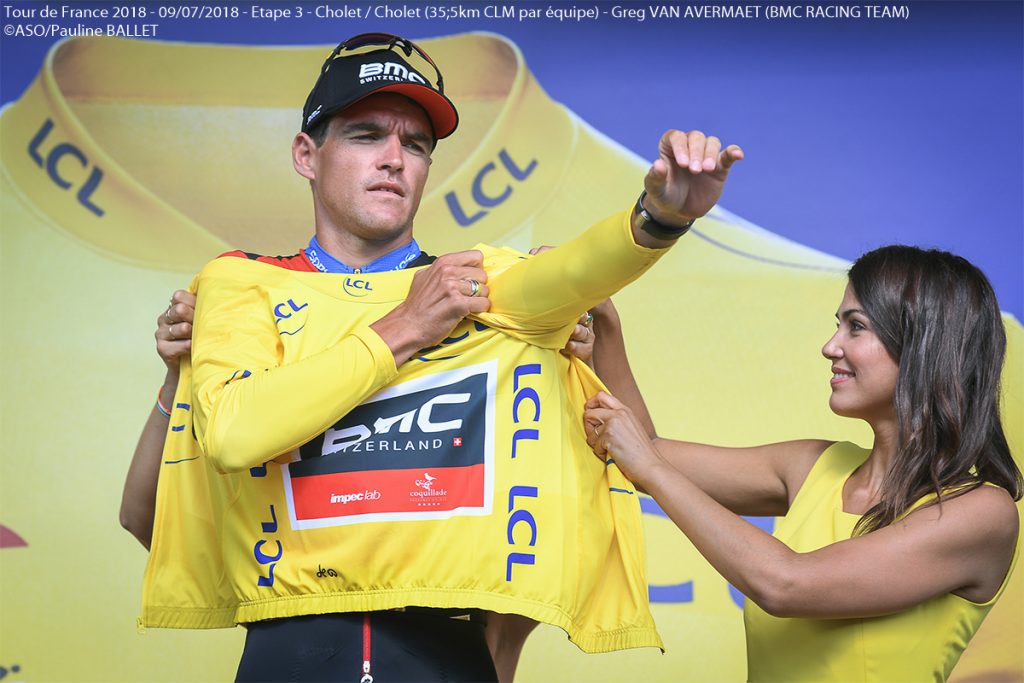 The eight riders of Mitchelton-Scott, winners of a similar stage in 2013 in Corsica, were the first to tackle the course at 3:10 pm. They were immediately followed by pre-stage favorites Team Sky. Their tactics were strikingly different as the Australian team seemed to spare Adam Yates and Mikel Nieve while the eight Sky riders took turns regularly. They were almost level on 14:12 and 14:13 at the first intermediate mark at kilometer 13. Movistar were just a second adrift at that stage but they faltered in the finale, to relinquish 49 seconds on Team Sky. But specialists BMC were the team to beat and they showed why they had won six of the last ten major team time trials by being fastest  at the second intermediate mark to finish on 38:46, with a four seconds lead over Team Sky. 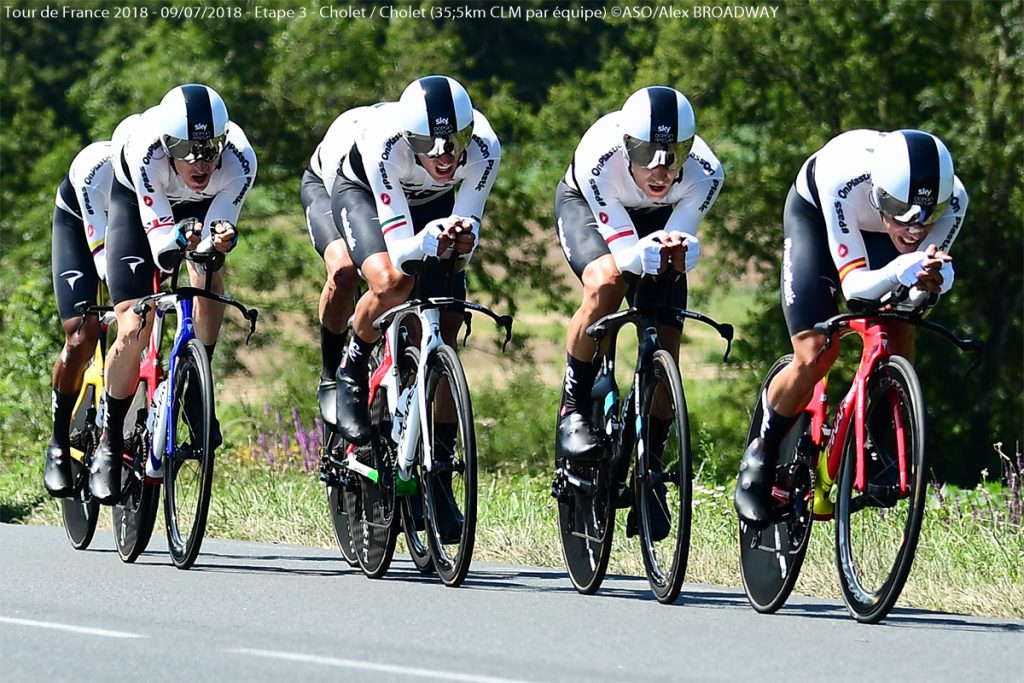 “We have strong riders, they took care of me so it was not so hard for me and it was great to see such a big crowd. It’s a good result but it’s far from over. You saw what happened in stage 1 with my crash. There is more time to take back of the other contenders,”

said team leader Richie Porte who, like Chris Froome, had lost 51 seconds after a crash in stage 1. 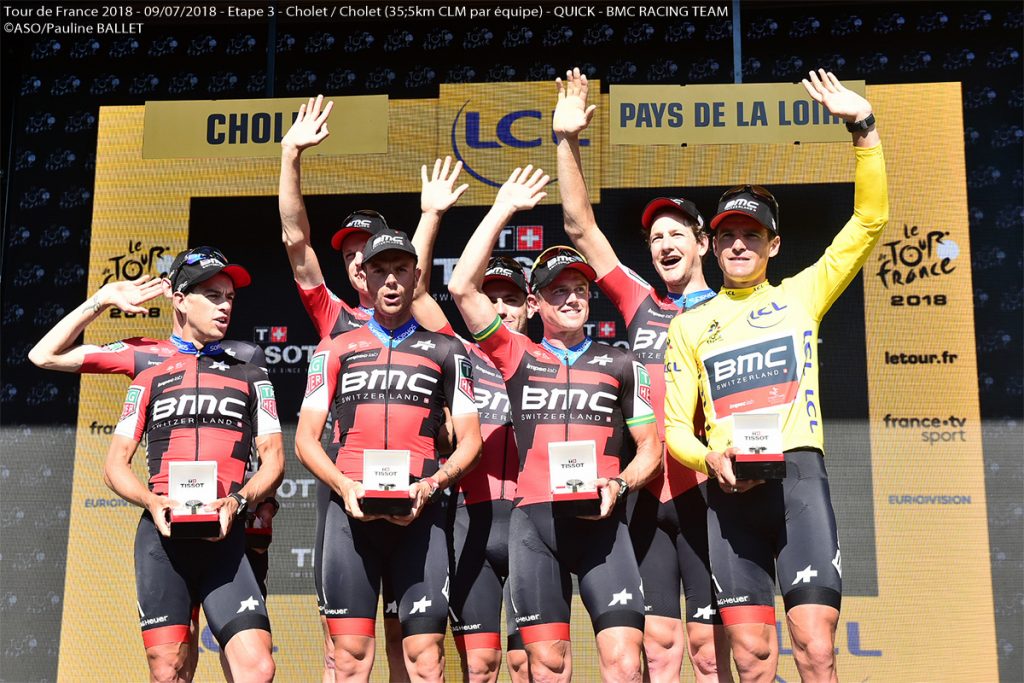 Their victory, the fourth in a TTT this season, also meant Team Sky have yet to win a team time trial on the Tour, having finished second or third in the four such efforts they took part in.
The stage victory was settled at this stage, even though Tom Dumoulin’s Team Sunweb also performed well, setting the 5th mark on 38:57, 11 seconds behind BMC. The suspense was also maintained by Team Quick Step, who challenged  BMC until the very last kilometers with only Philippe Gilbert, Yves Lampaert, Julian Alaphilippe and Bob Jungels left. But they were seven seconds short of a stage win that might have handed Gilbert the yellow jersey. As for Peter Sagan, he was dropped by his Bora-Hansgrohe team-mates in the last hill. As a result, the yellow jersey has now changed three times in three days, which only happened once in the last 25 years, in 2015. 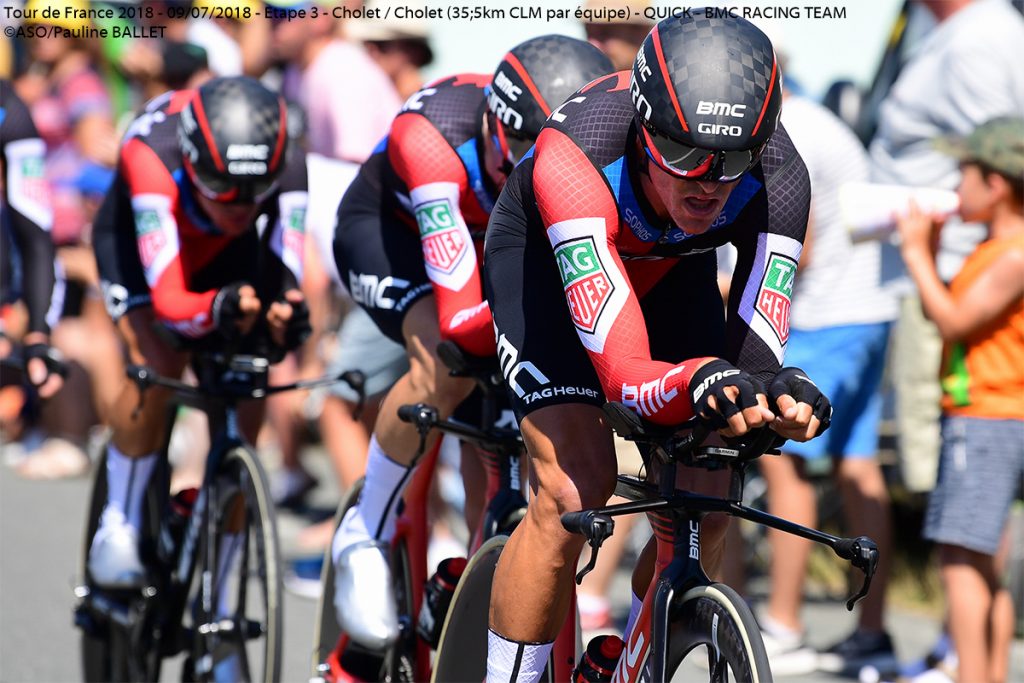