Longines Global Champions Tour of Berlin Kicks Off In Style!

The 11th round of action on the Longines Global Champions Tour welcomes the capital city of Berlin to the high-octane Championship race, with the powerhouse destination an exciting addition to the global calendar.

Nestled in the heart of the city, the world’s best riders and horses will head to the new venue of the Sommergarten, where top sport will play out, including the fight for the Longines Global Champions Tour Grand Prix of Berlin presented by Sapinda. GCL home team, the Berlin Lions, will be hoping for plenty of local support, as the world’s best teams battle it out for every valuable Championship point.

In a pre-event press conference today, Marco Danese, Sporting Director of the Longines Global Champions Tour and Global Champions League spoke of the anticipation and excitement surrounding the city’s debut on the 2017 circuit: “We have many events in capital cities – we have Paris, Rome, London for example, so Berlin is a natural place to have an event. We’re very excited to have one here for the first time, and have had a fantastic response from the riders. As you can see we have eight out of the top ten in the world coming here – we have all the best riders in Berlin and we will see top sport here.”

Marco was joined by colleagues and riders, all of whom shared his excitement about the three day event in the capital city. Volker Wulff, Managing Director Berlin Equestrian Events agreed, saying: “The quantity of the top riders we have here in Berlin is seldom – it’s not often you have 8 out of the top 10 in the world. With our partners, Longines, Sapinda and DKB we felt very secure about hosting a show in Berlin, featuring prize money of 1 million euros.”

Volker went on to explain why such a location in the heart of the city has been a rewarding challenge to realise: “The Sommergarten is a very special place, so we are not able to enter with huge trucks and tractors, but we have built [the show ground] up beautifully and I am very happy with the set up.” 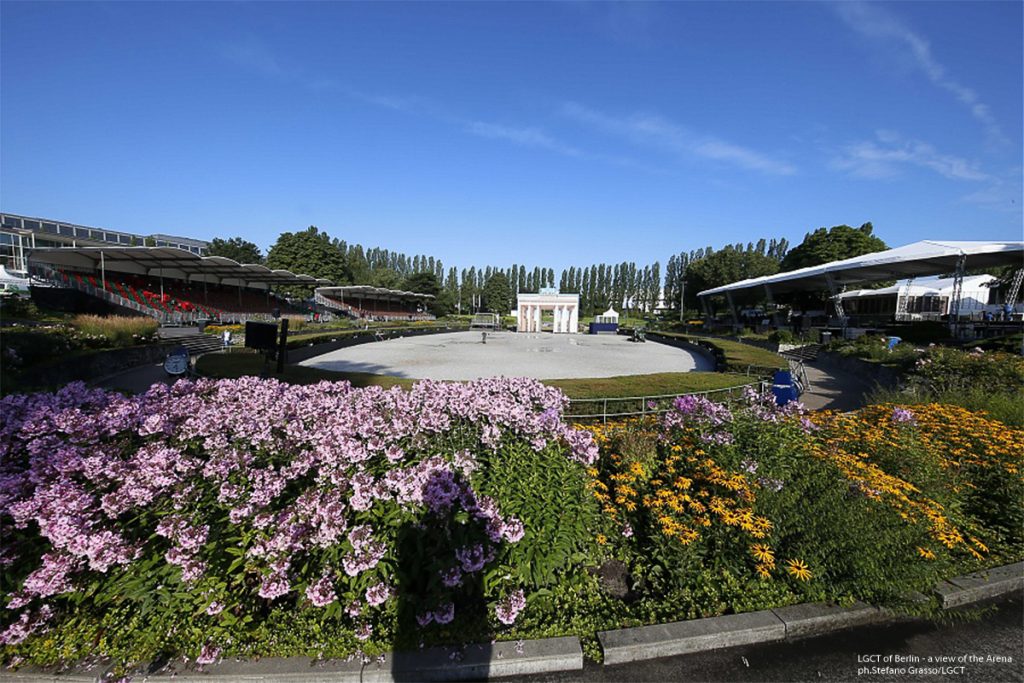 The Sommergarten at the Funkturm in Berlin, is a centrally located, park-like green area on the grounds of the Messe Berlin. Approximately 10,000 square meters in size, the garden was originally created in the heart of the capital as a place of relaxation and peace, providing a unique ambience. Since 1981 the Sommergarten houses a sculpture garden with works by contemporary Berlin artists. Dirk Hoffmann, Managing Director of Messe Berlin, said: “The Sommergarten is the ‘green breath’ of Berlin. We are proud to host such a highlight in equestrianism.”

Leading German rider and multiple Olympic medallist Ludger Beerbaum (GER) joined the press conference by video link. Talking about the significance of Berlin’s addition to the LGCT calendar and what it means for the sport in Germany, he said: “This is for sure going to be a special place for a big equestrian event, it’s something the riders have waited for for a long time.” Ludger will also be competing as part of the GCL team, the Cannes Stars, teaming up with compatriot Marco Kutscher – a combination who won for their team earlier this season in Madrid. Speaking about his team, Ludger revealed: “I was not part of the Global Champions League for the first year, but this year I was asked and I was able to arrange the team together, and I feel we have a very good team.”

Madeline Winter-Schulze, German Champion in Jumping and Dressage who was born in Berlin and grew up in the city also joined via video link. Speaking enthusiastically about the upcoming event, she said: “In 1956 I rode my first international show in Berlin, and I was very excited but all went well. Now I’m very excited about the premier of the Global Jumping Berlin and I’m sure it’s going to be fantastic.”

German show jumper Holger Wulschner (GER) agreed with Beerbuam and Winter-Schulze, echoing the excitement amongst the riders for an event such the LGCT of Berlin: “An equestrian event like this in Berlin is long overdue! I’m sure that with the top riders we have already confirmed for this debut here, it’s going to be established very soon as a top equestrian sporting venue.”