Founded on June 11, 1994 by magazine publisher Robert E. Petersen, and his wife Margie, the Petersen Automotive Museum is owned and operated by the Petersen Automotive Museum Foundation. Previously located within the Natural History Museum of Los Angeles County, the museum is permanently housed in a historic department store originally designed by Welton Becket. The building opened in 1962 as a short-lived U.S. branch of Seibu Department Stores, before operating as an Ohrbach’s department store from 1965 to 1986. Six years after Ohrbach’s closed, Robert Petersen selected the largely windowless site as an ideal space for a museum, where artifacts could be displayed without harmful exposure to the ultraviolet radiation of direct sunlight.

The Museum’s unforgettable architecture by world renowned architect, Welton Becket was cutting edge when the building was opened in 1962 as Seibu, a Japanese department store. When Seibu left the United States in 1965, Ohrbach’s moved into the building and it became a popular local shopping spot until its closing in 1986. The building stood vacant for approximately 6 years until inspiration struck the late Robert E. Petersen, who was looking for a consolidated headquarters for Petersen Publishing. Upon further investigation, he decided that the near-windowless structure would not be the best choice for an office building, but it would make an excellent museum. To preserve the Museum’s artifacts inside, they need to keep away from the sun’s damaging ultraviolet rays.

Seeing the building’s true potential as an automotive-inspired educational institution, Mr. and Mrs. Petersen put forth a large portion of the money necessary to create the Petersen Automotive Museum. The Museum was to be much more than a large room filled with cars parked in rows like an indoor parking lot. From the beginning, the vehicles chosen for exhibition had to be displayed in context to give them real meaning and a better experience for all who would come to visit. The “Streetscape” was full of architectural elements that were period correct for the vehicles that surrounded them, immersing visitors deep into the stories that were told. The second floor featured rotating exhibit areas and the third floor featured the Discovery Center which taught art and science through the automobile to children of all ages. 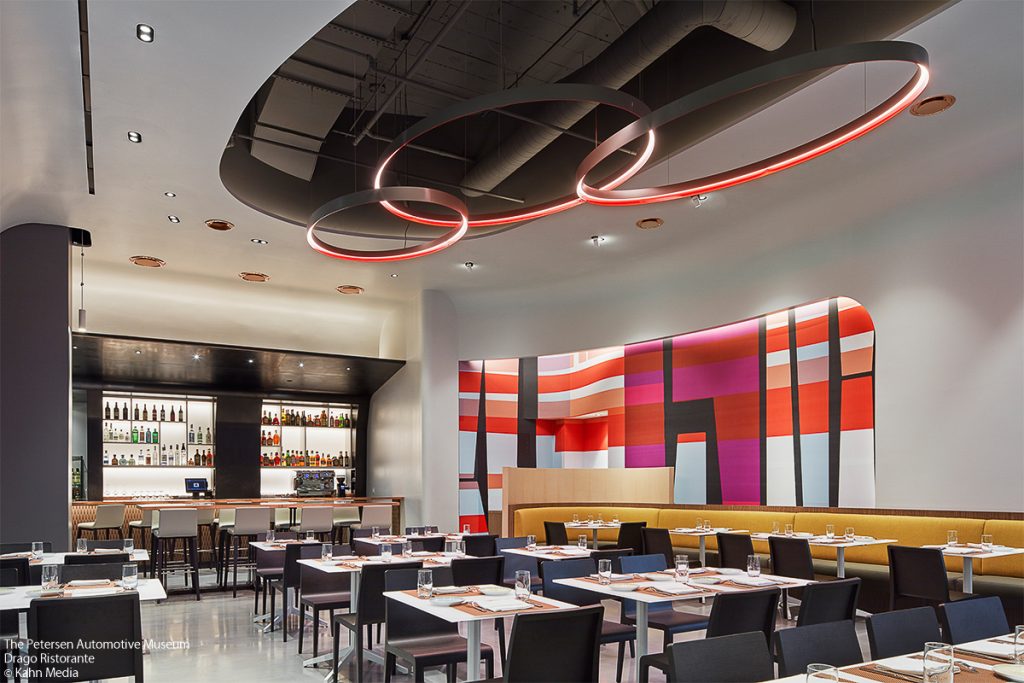 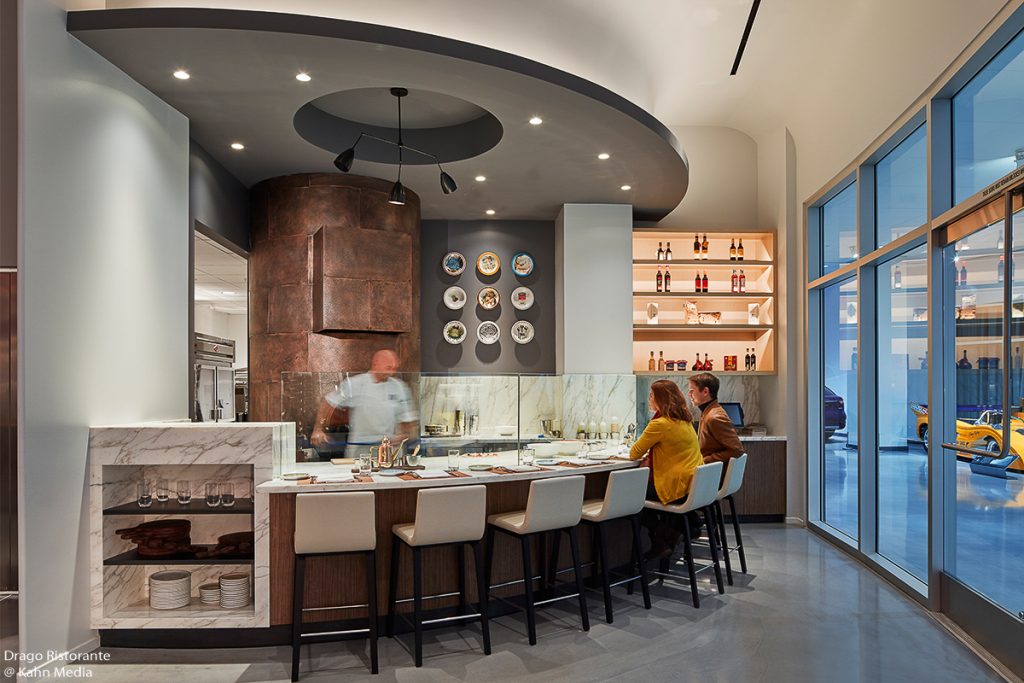 In 2015, the museum underwent an extensive $90 million renovation. The building’s façade was redesigned by the architectural firm Kohn Pedersen Fox, while designers at The Scenic Route configured interior spaces to accommodate changing exhibits that are intended to encourage repeated visits. The exterior features a stainless-steel ribbon assembly, made of 100 tons of 14-gauge type 304 steel in 308 sections, 25 supports and 140,000 custom stainless-steel screws. The remodeled museum opened to the public on December 7, 2015.

The transformed Petersen Museum creates a renewed image for the museum capturing the art, experience, culture and heritage of the automobile, and becomes a worthy neighbor for the buildings of Museum Row, on Los Angeles’ famed Miracle Mile. 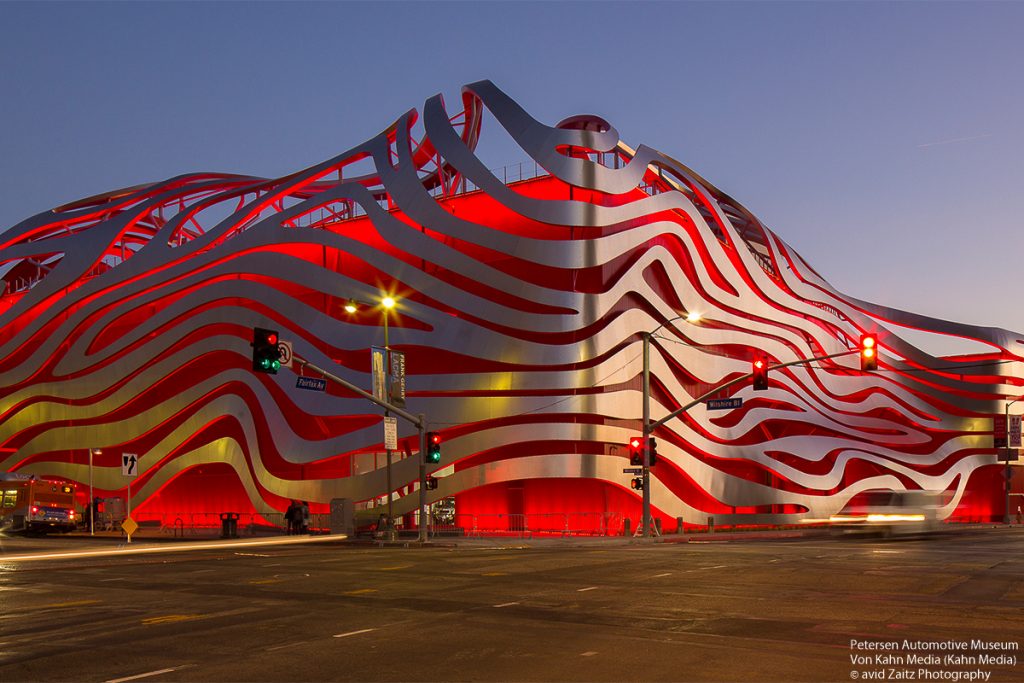 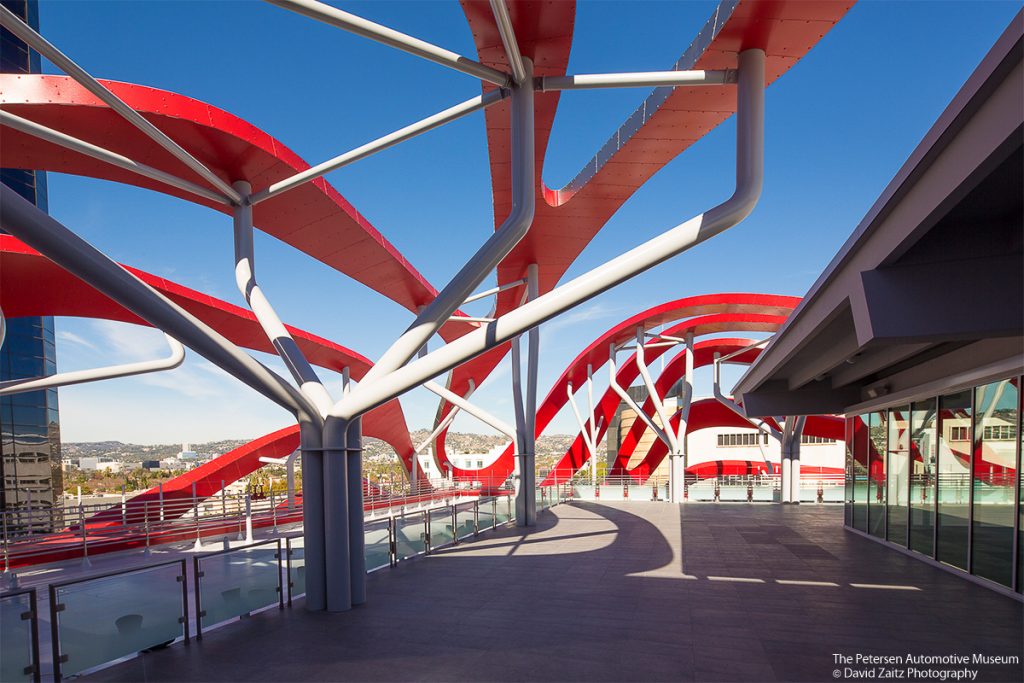 Inspired by the form of a car, KPF’s design creates a new “body” around the existing “chassis” of the museum. The rooftop is converted into a party space that can be rented out. A corrugated aluminium rain screen outboard wraps the building, while “ribbons” of angel hair stainless steel and red painted aluminium flow around the building, manoeuvring the existing entry vestibule and other apertures. Sitting atop the existing structural system like the body of a car mounted to its frame, the steel “ribbons” evoke a sense of speed and movement and are brushed to avoid creation of glare. The design offers a contemporary interpretation of the mid-century, space age “Googie” architectural style that characterizes Los Angeles. The result is one of the most significant and unforgettable structures in Los Angeles. 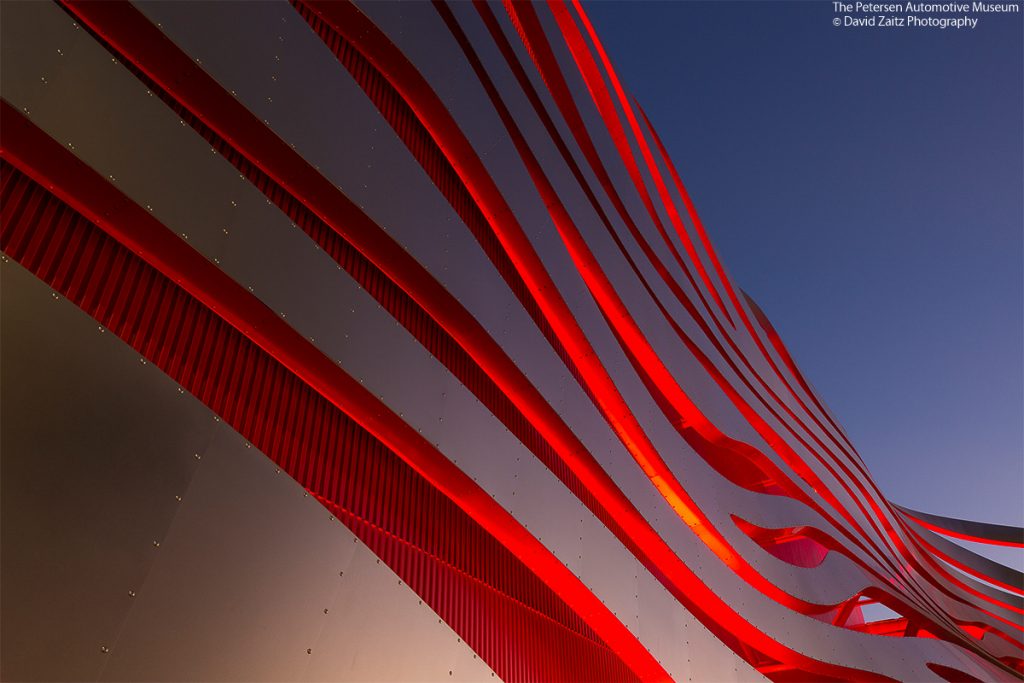