A star-studded line-up – including 7 out of the top 10 riders in the world – will take centre stage at the Tops International Arena in Valkenswaard, The Netherlands, as the turbo-charged race for the Championship accelerates.

With just three events left to go in the 2017 Championship fight, the battle for the title has become nail-bitingly tense. Current leader, and Dutch national hero Harrie Smolders (NED) looks to be on phenomenal form as he fights to keep his title dream alive, consistently bagging valuable points at every leg to now sit on a score of 263 overall.

One man who will be hoping to gain an advantage on ‘home turf’ will be Alberto Zorzi (ITA) – the young Italian based at Tops International Arena, who sits just behind Smolders in the Championship race. A mere 18 points away on 245, Zorzi has the potential to overturn the leaderboard, ensuring the fight to the final will be one to watch. Just behind the top two is German star Christian Ahlmann (GER) who looks to be making a significant comeback as the Championship gallops to its culmination. Always one to watch, Ahlmann sits on 220 points overall and with strong results in the final three legs could realise his dream of taking the overall Championship.

The top three will have everything to do, as a whole host of stars will be out in force for the 13th leg of the Championship calendar. World Number 1 Kent Farrington (USA) will be joined by the majority of the top 10 riders in the world, including Lorenzo de Luca (ITA), Daniel Deusser (GER), Maikel van der Vleuten (NED), Sergio Alvarez Moya (ESP) and two-time LGCT Champion Scott Brash (GBR).

Visitors this weekend will have the opportunity to watch the best of the best in action in the main arena, as well as view the warm up to get a behind the scenes look at how top athletes prepare for classes. Luxury shopping, mouth-watering refreshments and plenty of entertainment will be on offer for all the family, as well as action-packed back to back classes in two different arenas.

There will be plenty of chances to witness heroes of the sport in action, with many of the biggest names in show jumping heading to the impressive venue. Olympic legend Ludger Beerbaum (GER) will be one to watch, as will top French rider Simon Delestre (FRA) and Marcus Ehning (GER) – all of whom look to be on strong form. Other stars include Penelope Leprevost (FRA), Nicola Philippaerts (BEL), Olivier Philippaerts (BEL), Eric van der Vleuten (NED), Gregory Wathelet (BEL), Max Kühner (AUT), Marco Kutscher (GER) and Henrik von Eckermann (SWE). 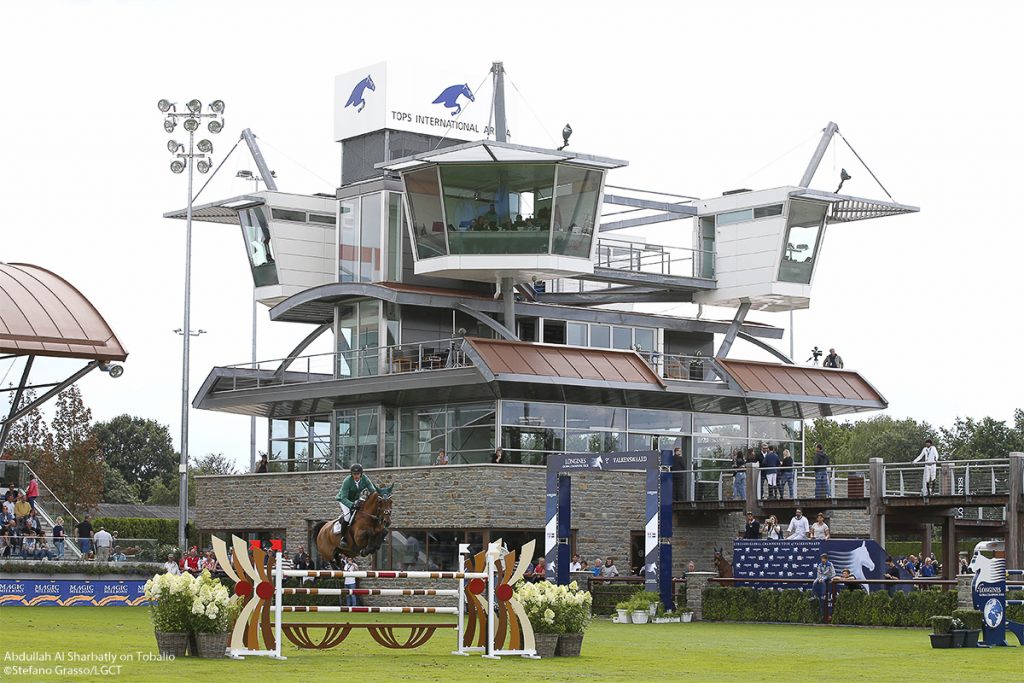 Valkenswaard, The Netherlands, is the spiritual home of the Longines Global Champions Tour, and has always been a favourite with riders, owners and partners alike. For the 12th season of the world’s premier show jumping season, the spectacular, state-of-the-art Tops International Arena will host the 13th round of the Tour from 11th – 13th August. The superb facilities created by LGCT founder and president Jan Tops have raised the bar in equestrian sport new heights, cementing the venue as the epicentre of equestrianism in Europe.
2016 saw the Longines Global Champions Tour of Valkenswaard feature 23 Olympic athletes in their final competition before they flew directly to Rio, a number unprecedented ahead of the 2016 Olympic Games. The weekend was also the exhilarating turning point for the overall LGCT title Champions Rolf-Göran Bengtsson (SWE) and his formidable stallion Casall ASK after they won their second Grand Prix of the season, putting them in the running for the Championship title despite fierce competition from the world’s best horses and riders.
Designed with the horse as the top priority, the show ground features an exceptional 125m by 85m sweeping grass arena, four further sand arenas featuring top class footing, canter tracks and lunging arenas, expansive warm up arenas, exceptional wash areas and facilities for grooms to provide top standard care and over 500 world class and beautifully designed stables available for visiting competitors. Within the impressive complex there is a shopping village, refreshments and entertainment areas – all of which are available for everyone in the family to enjoy, and tickets allowing the perfect view of the action under covered grandstands as the 2017 LGCT Championship battle gallops towards the finish line.